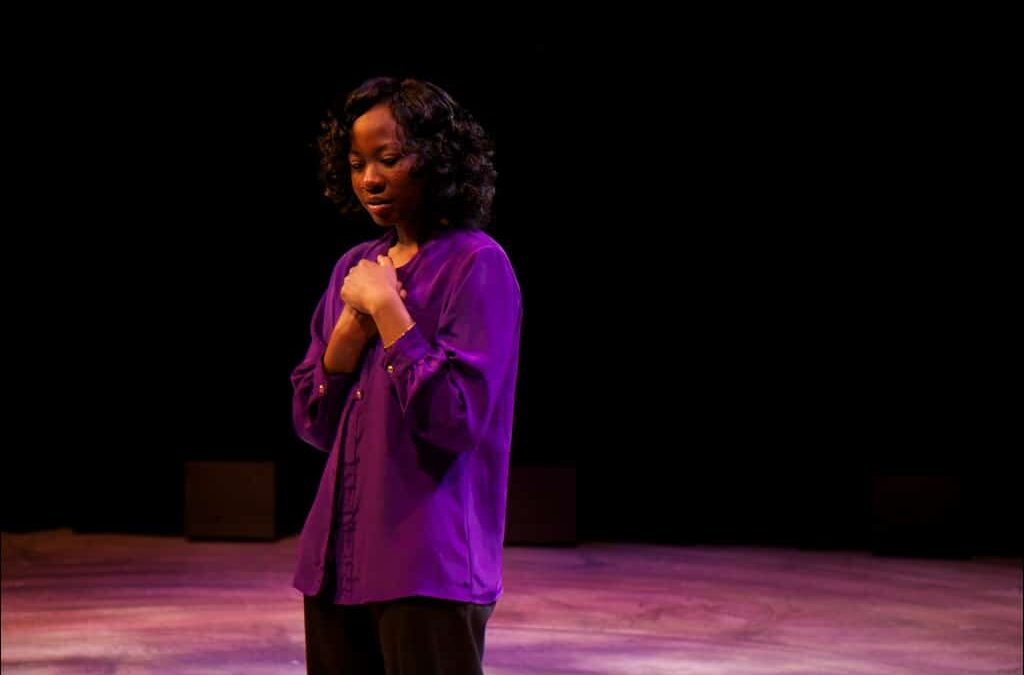 By Emily Smith
Special to The Denisonian

From the moment the house lights dimmed in Burke Black Box Theatre, the audience of Denison’s third mainstage production, Adventures of a Black Girl in Search of God, was immediately immersed in a world in which the spirits of those who have come before us are just as “real” as we are.

Through a compelling combination of movement and sound, the half-dozen chorus members, representing “the ancestors,” actively constructed the surroundings in which we meet our main characters and in which their story unfolds.

The story begins with a dramatic juxtaposition, as the stage is divided by a gigantic swath of fabric, manipulated by chorus members to call up the image of a creek. On one side, Pastor Michael Baldwin, played by junior Kym Littlefield, is performing a funeral service — for his own daughter, Janie. Simultaneously, his wife, Rainey, played by sophomore Lauren Adejumo, sobs over her daughter, and pleas with God to let her child live. As the play goes on, we see Rainey and Michael struggle with their dissolving marriage and dealing with questions of faith in the face of tragedy.

Meanwhile, Rainey’s father, Abendigo (“Ben”), played by sophomore Merlin Bell, is the ringleader of a group of septuagenarians intent on “liberating” objects which depict offensive stereotypes of blacks from their original locations. The group’s revitalizing the legacy of black history in Canada coincides perfectly with Michael leading a protest against the decision to change the name of “Negro Creek Road.” This decision was made to pacify white sensibilities. Ben is ill, but he insists on spearheading one last mission: to reclaim the jacket worn by his ancestor in the War of 1812, which his grandmother lost her life saving from the rushing waters of the creek.

There were a number of standout performances among the cast, many of whom are new to Denison theatre. Littlefield has a strong, focused stage presence which is supplemented by the natural power of his voice, perfect for an experienced pas- tor. Adejumo shines primarily in her in- teractions with Littlefield, with whom she has excellent chemistry. Bell’s Abendigos eloquent, in a sort of down-to-earth way, which is appropriate, considering his character’s profound connection to Negro Creek. Ben’s partners-in-crime (or rather, partners-in-liberation) provide brilliant moments of comedy to balance out the serious themes.

Juniors Gabriel Cuinine and Brittane Maddox play Darese and Girlene, who remember well the struggles civil rights era and continue to fight for the cause well into their later years. Freshman Aaron Robertson is particularly amusing as Burt, who has a penchant for changing his “code name” from mission to mission. Freshman Dyamone Hopkins, plays Ivy, who remains at Ben’s side long after he re- neged on his promise to marry her. While Ivy has her fair share of comedic moments, her speech to Ben discussing her feelings about his betrayal is incredibly powerful.

The black box space, free from the constraints of the proscenium arch in Ace Morgan Theatre, provides the opportunity for a variety of abstract set pieces and fascinating lighting choices to shape the world of the play, and they do this very effectively. The play’s use of music, including everything from spirituals and hymns to the marvelous percussion provided by junior Joyce Lindsey, represents vital cultural traditions that the main characters are, each in their own way, trying to preserve.

Overall, Adventures is a revolutionary play for Denison theatre which forces the audience to consider what we owe to our communities and our ancestors, and in what sources of authority we choose to believe in times of turmoil.