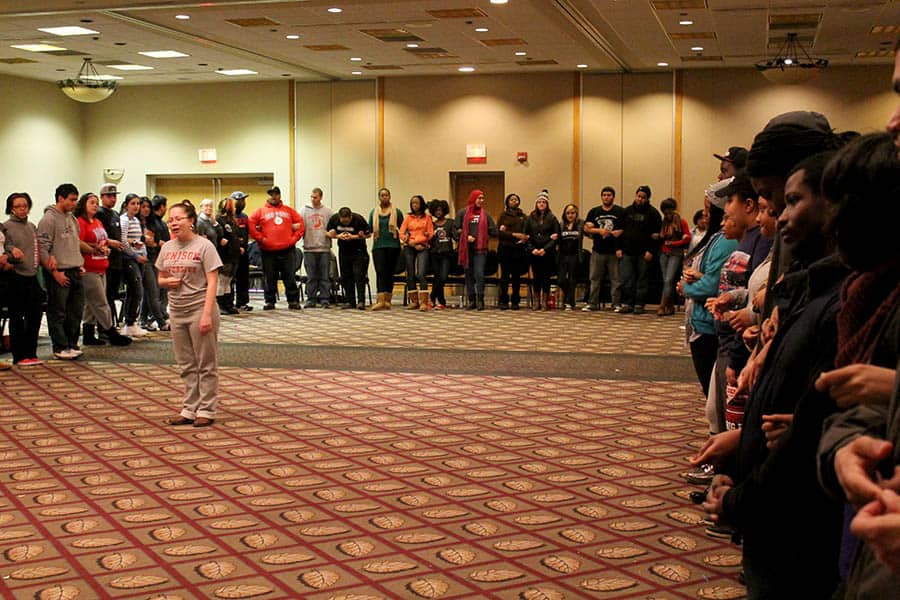 The idea of having a posse to lean on to affect great change is the backbone to education leader Deborah Bial’s Posse Foundation.

Bial, who earned her master’s and doctoral degrees in education with concentration in higher education administration, planning and social policy from Harvard University, was struck when she overheard a student comment, “I never would have dropped out of college if I had my posse with me.”

Bial’s creation of the Posse Foundation sprung from the concept of capitalizing on the power and potential of a posse of academic leaders to be instrumental in individual and community development on college campuses nationwide. The conception of the Posse Foundation was crystallized in 1989, as it became a nonprofit foundation renown as one of the most comprehensive youth leadership development programs in the United States.

Sindy O. Pimentel ‘15, a Posse Scholar from Boston, Mass., sheds light on the process behind the scholarship. Nominated by her guidance counselor based on her leadership, service, and academics, she recounts her first experience with Posse as “really random,” as the first round consisted of games and activities meant to engage candidates’ leadership skills.

After this round, a series of interviews with Posse administrators and Denison faculty narrowed the field and secured Sindy the scholarship.

The success of Posse is grounded in that it groups scholarship recipients into multicultural groups of 10 and sends them to colleges as a group after a rigorous training process. The Foundation claims these Posses are undoubtedly effective as they meet and surpass their expectations of evoking change and being a positive, dynamic force on campuses.

High-ups believe this mission is working; President Obama donated a portion of the $1.4 million he received from the Nobel Prize and included the foundation on his list of top ten national nonprofits.

The organization has recruited 4,237 public high school students, according to its website.

Pimentel agrees that having a group of fellow scholars to lean on was crucial to her success on the Hill, calling the Foundation’s ability to match personality types “uncanny. The Posse Foundation essential[ly] created a small family on campus for me,” she continues.

She stresses, however, that she quickly branched out beyond the circle, something that the organization invests heavily in. Pimentel herself would go on to serve as a DCGA Senator for La Fuerza Latina, and found her own club, Multicultural Dance Collaborative, to encourage campus diversity through dance.

Seventy percent of Posse scholars have founded a new Denison student organization. In her own words, “Students in Posse are all over the place.”

The Posse Foundation’s training for its scholars continues throughout the Posse’s student’s college experience.

Having the Posse Scholars, university and college administrators, and the general student body work together to make their campuses more interactive, is one of the primary social goals of the Foundation. Throughout their academic career, the Posse students meet with university chancellors, presidents, provosts, and deans to critically discuss campus-wide issues. These issues are brought to a fore at the “Posse Plus Retreat,” attended by Posse scholars, administrators, and faculty members. Each Posse scholar also has the option of bringing a non-Posse friend. Erik S. Farley ‘03, Associate Dean of Students and Director of Multicultural Affairs, attends the retreat every year.

“The Posse Plus Retreat provides an off-campus opportunity in a safe environment to further talk about current issues,” he explains. The theme of this year’s retreat, for example, was entitled “What’s Your Worth?: Class, Power, and Privilege in America.”

Farley says that the Posse program has a positive humanizing effect on campus. By engaging in cross-cultural ecumenism and student development, Posse brings attention to issues Denison has historically had difficulty with.

“Posse students raise questions in class about what society should be or could be,” Farley says, adding that Posse scholars “add to a more fruitful dialogue” in the classroom through “distinct lived experiences.”

He also notes that Posse Scholars help faculty develop a “very intentional, holistic way of teaching and advising students…to actually realize that their students have emotions, feelings, and values as human beings.”