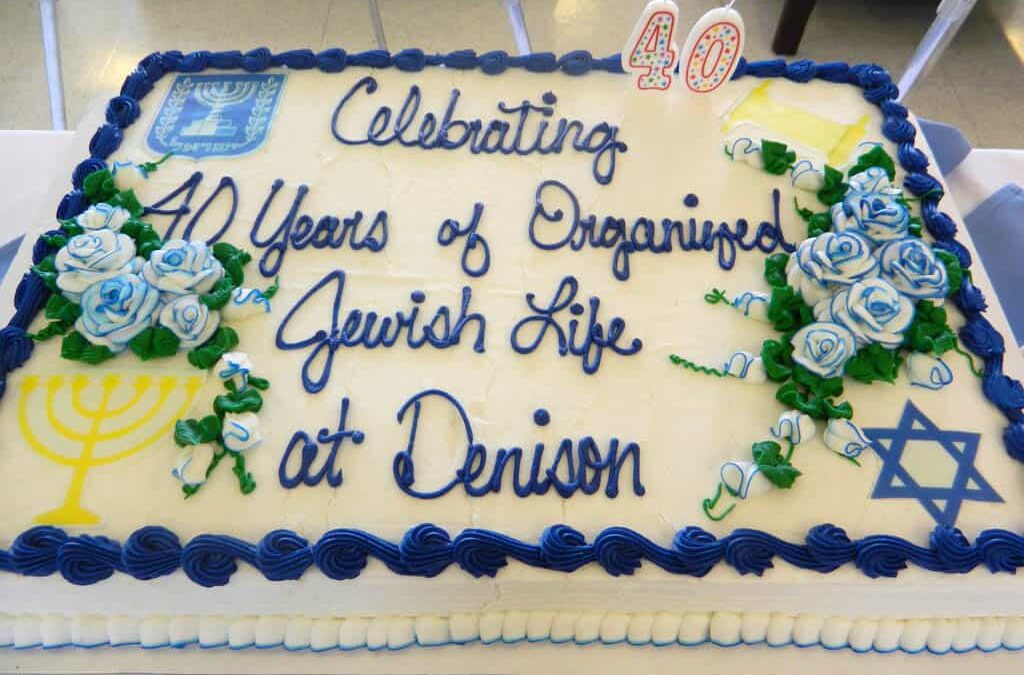 Not too long ago, the plaque at the foot of the West College Street drive up to campus read “Denison University: A Christian College Of The Liberal Arts.” Forty years ago, there was no Open House, and very little religious life that was not some denomination of Christianity to speak of.

However, 40 years ago last Friday, a fledgling group of Jewish students founded the first instance of organized Jewish life at Denison, and this past weekend, many of those founders returned to campus for the 40th Anniversary of Jewish Life at Denison.

A coordinated effort by the Denison Alumni Relations office, the Center for Religious Life and the Denison University Hillel, this historical event spanned Friday afternoon to Sunday morning, beginning with a birthday party on the second floor of Slayter that was open to the public, like the entire weekend’s events. Over 200 students and faculty stopped by to eat cupcakes, read up on Denison Jewish history and celebrate Hillel’s birthday.

These themes of food, history and celebration continued throughout the weekend, as several meals brought together students, faculty and alumni in the Mitchell All-American room for enlivened dining and conversation.

Dean Hansell ’74, one of the student founders of Jewish Life at Denison, shared his testimony of what it was like to be Jewish on campus in the 70s, a time when outing oneself as anything other than Christian triggered awe from one’s peers.

“Students dealt with a lack of awareness and ignorance more than anti-semitism,” Hansell said, though, just as homophobic and racist sentiments lurk beneath the surface of Denison’s culture today, anti-semitism was, in the opinion of he and other alumni, definitely around.

On Saturday afternoon, a colloquium facilitated by university chaplain Mark Orten discussed the past, present and future of Jewish life at Denison. Questions were brought up about the ways that Jewish identity has changed in the past 40 years and what the Jewish community has to do to preserve its identity after it has “assimilated,” as well as the issue of conducting outreach to current Jewish students.

Josh Goldman ‘14, one of the student coordinators of the weekend, identified a key dilemma facing Jewish student leaders, saying, “Outreach is in contradiction with our values of not proselytizing,” referring to the fact that unlike other Abrahamic religions, Judaism “is not a religion of conversion.”

In this conversation, members of the current Hillel board connected with their predecessors and brainstormed ways to further enrich the experience of the Denison Jewish community.

The last formal event of the weekend was the dinner on Saturday evening. Attendants were treated to a lesson on Denison history from President Knobel, and some testimony from students, including first years Emma Share and Kara Ferrari, about what their experience with Jewish Life on campus has meant. A theme of constancy and stability was expressed, as well as the opportunities Hillel offered for students to grow as people and as leaders.

This gathering was the first of what looks to be many connections with Denison’s Jewish alumni, and it provided some reflection that members of the community hope will lead to a bright way forward.

Revelors damage the Moonies during second weekend of parties