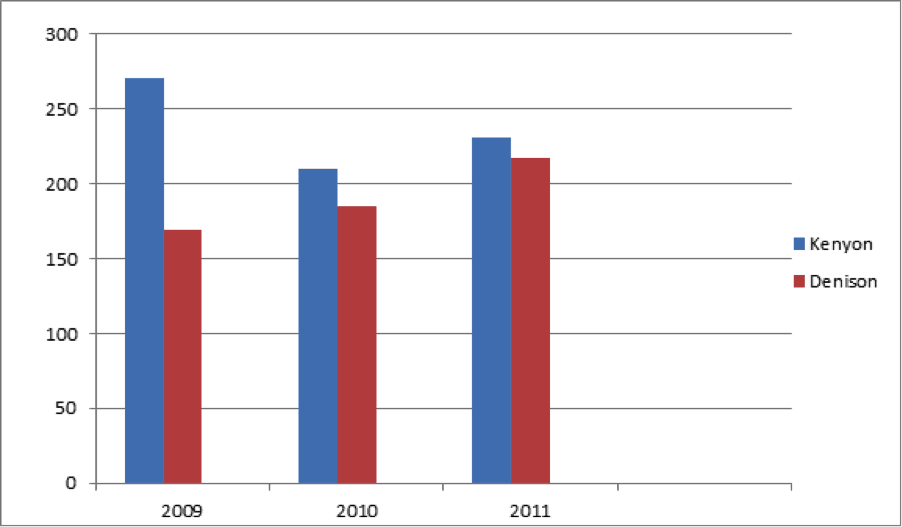 “Does Denison have a drinking problem?” That was the question The Newark Advocate asked readers last Sunday. According to statistics that show that Denison has the second highest number of liquor violations of seven other Ohio liberal arts colleges, this might seem to be the case.

New numbers from the Office of Student Development at Denison, however, suggest that the school’s new Party Registration policy may be the solution to this problem. According to the office, the number of alcohol related medical transports has fallen from 17 in the spring of 2012 to 11 in the spring of 2013.

Party registration went into effect in early January this year. The policy requires party hosts to be at least 21 years old, have door monitors, and limit the number of students in their party space to ensure a safe environment. Hosts must also provide food and non-alcoholic beverages for their guests.

“Students are managing a lot of this behavior,” says Garrett Moore, director of security at Denison. He points out that new policies such as party registration and limiting swipe access to dormitories has led students to craft a more responsible atmosphere when it comes to parties and alcohol use. “Do we have an alcohol problem at Denison?” asks Moore. “Yes. Just like at any other college.”

The Newark Advocate averaged the number of liquor violations over five years from Denison and several other Ohio schools, including Kenyon College. The Advocate reported that Denison had an average of 239 liquor violations between 2007 – 2011 as opposed to 196 at Kenyon.

The medical amnesty policy protects intoxicated students from university sanctions as long as they reach out to security or a Resident’s Assistant for help, but according to security director Garrett Moore, medical amnesty cases are still counted as liquor violations. According to Denison’s Student Conduct office, only 5 percent of students that receive Medical Amnesty and complete its subsequent education process violate university alcohol policies again.

Vice President of Student Development Laurel Kennedy is unsure about how to explain the large drop in violations in the late 2000’s, but is an avid supporter (as well as one of the key developers) of university policies such as medical amnesty and party registration.

For Kennedy, it is disappointing to see the local media publicize Denison students’ relationship with alcohol. “[The stories] were not precipitated by anything. We have had no alcohol transports for weeks.” She adds, “All metrics related to party registration suggest improvements on the issues that was of such interest to the media last fall.”