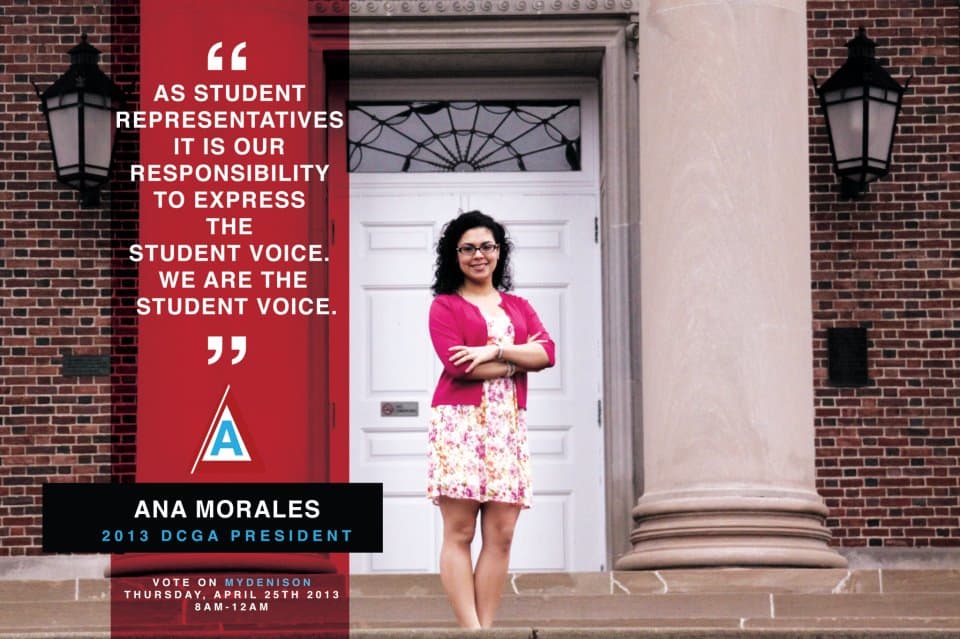 Around 1 a.m. Friday morning, an hour after polls closed, candidates for the presidency and vice presidency were contacted to be notified of the election out come. The next president of the Denison Campus Governance Association (DCGA) is Ana Morales ’14, a rising senior from Lawrence, Mass. She will be serving with Hung Tran ’15, a rising junior from Vietnam. The other candidates were DCGA Policy Chair, Jackson Wu-Pong ’15 and Finance Chair Stetson Thacker ’14.

“We put a lot of hard work into the campaign,” Morales says of her campaign team, which included a manager, a volunteer coordinator, a public relations team, and over 50 volunteers. “You need to have your key people and then your team of volunteers.”

For Tran, the win comes with the recognition of big responsibility. “I’m kind of nervous but excited for all the things that will come next year,” says Tran.

Tran’s agenda as Vice President and chair of the Committee on Residential Life focuses on reevaluating the Resident Assistant selection process and advancing social spaces.

Morales ran on a campaign that was focused on reconnecting the community at Denison. In a debate between she and Wu-Pong Wednesday evening, she pointed out the importance of “intentional” conversations between students and communal events. When asked about her lack of DCGA related experience, she responded, “I don’t have the platform or the experience that DCGA wants me to have, but I have a voice.”

“I was never doing this alone,”  said Morales.

According to Elections Committee Co-Chair and former DCGA President Hannah Frank ’13, voter turnout was higher this election than in previous years. According to her, 1000 students of 1708 that were eligible (seniors were not allowed) voted, for a turnout of 58.5%  – the national average for U.S. Presidential elections. Morales won with 64.5% of the vote while Tran won the vice presidency with 62% of the vote.