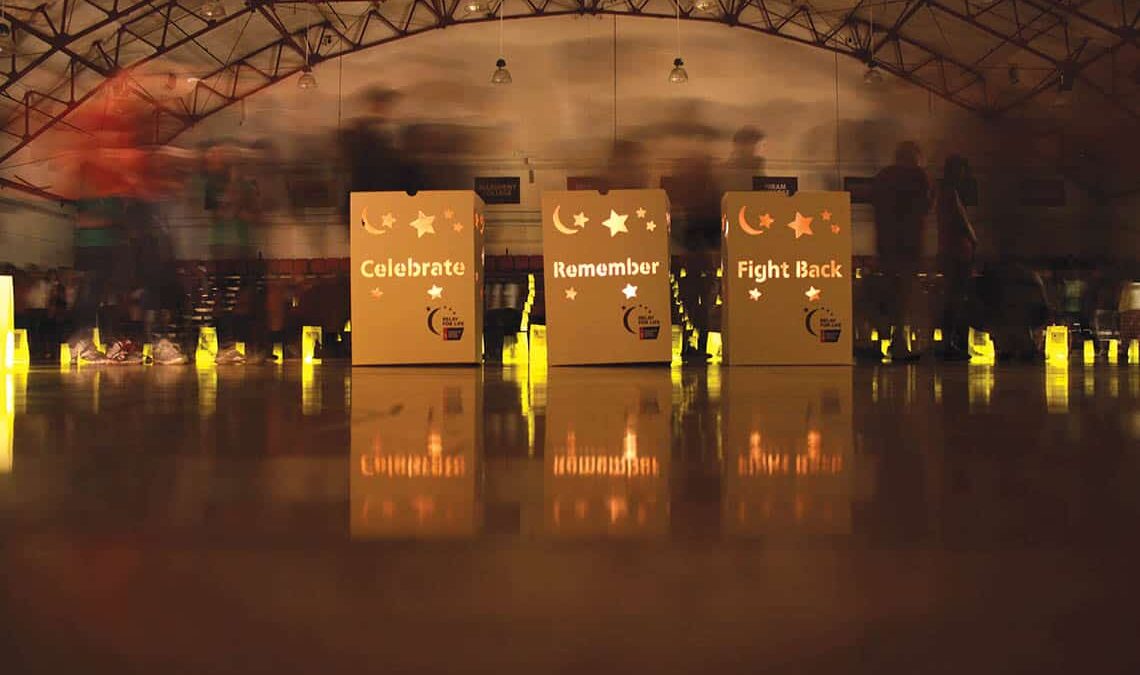 More than 100 Denison students relayed at Mitchell Athletic Center to remember lost loved ones, celebrate survivors, and pledge to fight back cancer. This year’s $44,000 fundraiser also celebrated Relay for Life at Denison’s raising more than half a million dollars over 9 years.

It all all dark in Mitchell Center’s Livingston gym on the night of Friday, April 12. The gym, however, was lit up with glowsticks and spirit.

Across 60 feet of the audience’s area shined tens of “luminaria” – bags with glowsticks – spelling the word “hope.” In the middle of the basketball court were 65 “luminaria,” each of which bore the name of a cancer victim, loved ones of the many students in attendance at the ceremony.

“Luminaria” is a term for the concept of lost ones “lighting our paths,” explained Alison Sheldon, a sophomore international studies and psychology double major from Westfield Center, Ohio, team development chair of Denison’s Relay for Life.

Silently, more than a hundred students came together in a circle around the luminaria. They joined hands and spirits. As 65 names of lost ones were read off by Denison’s wellness coordinator Stephanie Agosta in commemoration, students solemnly marched.

Here and there suppressed sound of sobbing softly broke the silence, infusing the already sincere scene with more emotions.

There was also sympathy and love all around. As the 65 names had been read, students were free to go to the main area to participate in various activities different groups offered.

A smaller circle of students remained, all of whom came together hand in hand. The circle heard memories of loved ones, prayers to God, promises and well-wishing, and pledges to never stop fighting cancer. Many in this circle were Young Life’s and Denison Christian Community’s members, two of the many religious groups on campus.

In another corner, Latasha Hoard was giving her friend a warm hug. Four other students gathered around Henderson, some with their hands supporting his back, some offering consolation. Henderson was deep in thoughts and tears about his beloved mother.

The luminaria ceremony, though being a highlight, was just a part of this 19-hour event. Relay for Life 2013’s registration started at 4 p.m. on Friday, April 12 and ended with the awards presentation at 11:30 a.m. on the following Saturday.

“We have a really full schedule with a lot of great events. It all goes to a really great cause,” says Cecilia Salomone, a sophomore English and communication double major from Bainbridge, Ohio, co-chair of public relations. This year’s program included s performance of “Peace” by the Denison Gospel Choir during the luminaria ceremony, Denison’s Urban Dance Crew, DUWop a capella group, and a Taekwondo club performance.

The White Panda was brought to perform at midnight, which gathered a large crowd for 90 minutes. Another highlight of the event was student body president Drew Johnson’s shaving his head to show his support for the cause. Outlook’s traditional drag show at Relay also received enthusiastic support.

This year Relay attracted several teams representing various campus organizations: Greek life, different clubs, multicultural clubs, religious organizations, floors and buildings, sports teams, even just groups of friends who wanted to participate together. There was also the Relay for Life committee team. The Committee team has raised the most money, with $12,105.

“Everyone on the Committee has put in an enormous amount of work into this event, and we’re really grateful for the support of the Denison community for helping us raise so much money for such a great cause,” says Salomone.

As of noon on April 14, Relay for Life at Denison had raised $38,870 with 37 teams and 439 registered fundraising participants in total, according to Relay for Life’s website. Last year’s event only raised $24,000.

“We also had a lot of fundraising at the event, which brought the number over $44,000,” says Sheldon. Each group has its own booths, camps, or station in Mitchell’s indoor track. “Some teams have their own fundraisers outside of the event such as Team Let It Rock’s Bid-N-Date event,” says Salomone.

Relay for Life 2013 was a success. “This year we had a lot more teams and participants than last year,” says Sheldon.

“Relay was one of my favorite events last year as a freshman, and it met my expectations again this year,” says Luke Hillier, a sophomore from Pataskala, Ohio.

According to Sheldon, there are many elements of entertainment “to get people excited about the event,” but the final message the committee wanted to instill in participants’ minds is Relay’s threefold motto: “Remember, Celebrate and Fight Back.”

For Sheldon, it is the commemoration of her family members that cancer took away, the remembrance of “many survivors in [her] family, including [her] mom who [she] relayed for,” and her inexhaustive pledge to fight back cancer with Relay for Life and any means possible.