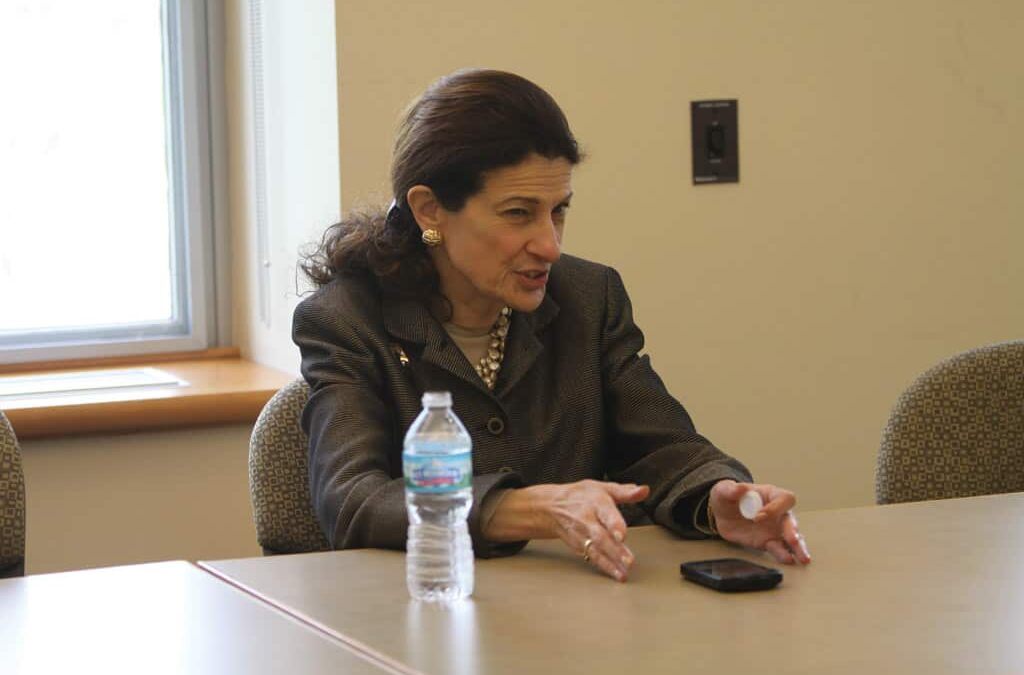 Senator Olympia Snowe sits down with The Denisonian

The Denison community welcomed Olympia Snowe, the former United States senator who dedicated her 18 year career to bipartisan action this past Thursday, April 18.  Her lecture,“From Challenge to Opportunity—Overcoming Obstacles in Life, and in Washington,” captivated the audience sitting in Swasey Chapel.

Snowe shared her personal obstacles and pioneering experiences with the audience.  In 1989, after Snowe married the Governor of Maine, she served concurrently as the First Lady and the United States congresswoman for Maine’s second district. For Snowe, there was uneasiness about serving in both roles:  “It was unusual that a governor and a member of Congress would be married,” points out Snowe. “I had wondered if it was too much concentration of power.” Maine has only four seats in the House of Representatives, in addition to the governorship and two Senate seats. “It was not something people had experienced before,” said Snowe.

As a Republican, Snowe served Maine as a congresswoman from 1979 until 1995, when she was sworn in as a Senator. Throughout her career in the Senate, Snowe has been recognized as one of the most moderate members. “A moderate Republican is more mainstream, not ideologically driven and who is focused on building consensus and willing to compromise on key issues,” says Snowe.

Snowe, recognized as one of America’s best senators by TIME magazine in 2006, identifies as pro-choice and voted against the Bush tax cuts in 2003, which lowered the tax rate for top income earners. According to Snowe, the tax cuts were not consistent with the Republican principles of fiscal conservatism. “We couldn’t afford it,” said Snowe. “It was all based on mathematics. We needed to preserve federal expenditures, and I was concerned about the debt.”

In November 2012, Snowe’s home state of Maine voted via ballot initiative to allow same-sex couples to marry. The senator, who voted for the Defense of Marriage Act in 1996, says “It was enacted in Maine, and its time to accept that. Unfortunately, our party doesn’t tolerate dissenting views.”

After serving 18 years in the Senate, Snowe retired from her political career.  The unwillingness of many senators to participate in bipartisan action weighed heavily on the former Maine senator and ultimately led to her decision to leave the senate.  “They’re not casting many votes in Washington,” says Snowe. “That’s the problem.”  Snowe now serves as co-chair of the Bipartisan Policy Center’s Commission on Political Reform where she has collaborated with other former politicians, including Tom Daschle, the former Democratic senator from South Dakota. “We’re engaging the public about the consequences of the political divide and soliciting their input on what we can do to change,” said Snowe.