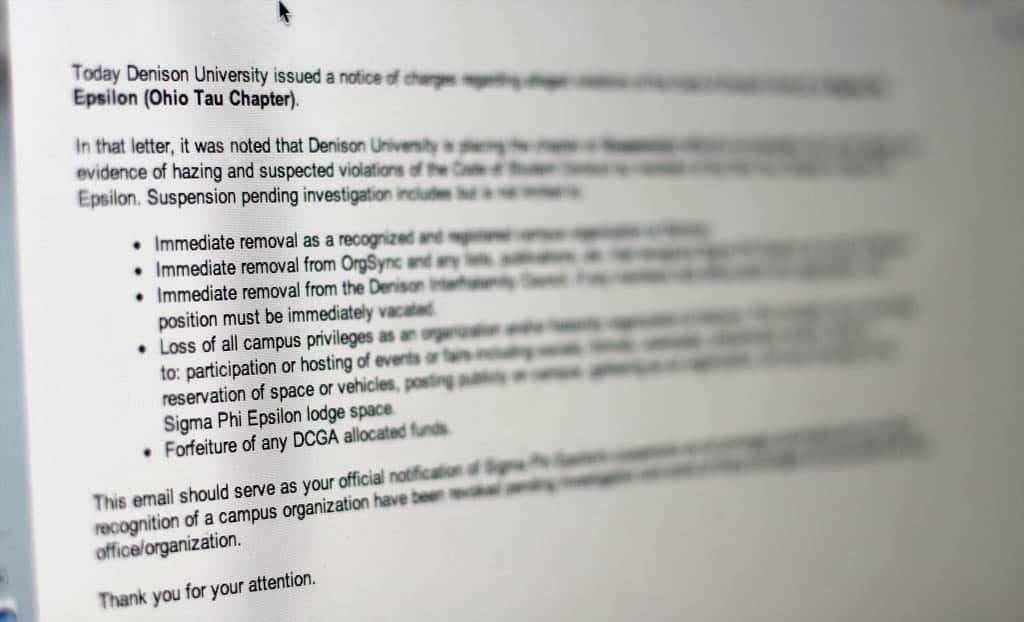 Sigma Phi Epsilon, more commonly known as SigEp, became Denison’s third fraternity to be put on suspension status. According to Denison’s Greek life report that is readily accessible from Denison’s website, the Ohio Tau chapter of the fraternity was suspended on Thursday, April 4 with the same status as the previous two suspensions of Kappa Sigma and Sigma Chi – suspension for pending investigation for violations regarding the Denison Code of Conduct.

The suspension was made known to every member of SigEp on Thursday in an email by Aimee Maczko, associate director of Campus Leadership & Involvement (CLIC), whose responsibility is the oversight of Fraternity and Sorority Life.

In the email, reasons for the suspension were spelled out in clear terms: “Denison University is placing the Chapter on suspension, effective immediately, due to the reports and evidence of hazing and suspected violations of the Code of Student Conduct by members of the Ohio Tau Chapter of Sigma Phi Epsilon.”

SigEp’s chapter president Cameron Crowe, however, questions the rationale of the suspension.

“We are suspended based on some sort of suspicion, a vague suspicion that we have violated the Student Code of Conduct,” says Crowe. He also emphasized his opinion on the transparency of the suspension, “The key word is ‘vague.’ Vague allegation and unspecific accusation. We really don’t have 100 percent details as to why [we are being suspended].”

Students have recently voiced their concern that the University is conducting an active “hunt” for Greek life violation to change the scene before Denison’s 20th president, Adam Weinberg, comes into office this July.

According to Vice President of Student Development Laurel Kennedy, suspensions such as those of Kappa Sigma, Sigma Chi – and now Sigma Phi Epsilon – mostly came from anonymous tips. “What has been happening is that we have received a string of anonymous tips from members of the campus community.  We’ve have been surprised by the number,” says Kennedy. “What we conclude is that members of the campus community are tired of seeing hazing going on. When they call and make a report — actually, most of these have been anonymously posted to Security’s website– we follow up and investigate.” She also explains that the number of tips received has been “more than [she has] ever seen before.”

“All the tips are considered very seriously,” says Maczko. “We want to make sure that everyone is safe and enjoying their educational experience, regardless of being in a fraternity or not.”

There also have been speculations of students, especially pledges – uninitiated new members – of some Greek organizations, providing tips to the University.

According to Director of Security Garrett Moore, if the tips are serious enough, and there have been previous complaints, the office would try to verify the information provided by conducting an investigation.

“Often the anonymous information itself is not enough to charge anybody, it first needs to be verified through investigation,” says Moore. “Investigations take the form of gathering evidence, conducting interviews and compiling anything that is relevant. At some point a determination is made that a violation occurred, and a charge is brought forward.”

According to Crowe, SigEp executive members will be meeting with the Chapter’s advisors to discuss next steps while the university and potentially the nation Sigma Phi Epsilon conduct investigation.

SigEp’s national headquarters representative will be on campus this Friday, April 12. They will be collaboratively conducting investigation alongside the Denison’s Security office.

According to Maczko, Kappa Sigma’s representatives came to campus this past Tuesday, and representatives from Sigma Chi will be coming this weekend. Answering concerns about the process, Maczko says “there’s care and thoughts in every part of the process. Every one of us would want to see the best outcome from these investigations.”

Representatives of Kappa Sigma’s headquarter and Maczko both say conclusions of investigation will be on a case-by-case basis. No information on possible outcomes will be released until the final conclusion of investigation has been reached by the national fraternity and the university.

This summer, Denison will be attending Novak Institute for Hazing Prevention from June 5-8 with the hope to prevent problems like this to happen on Denison’s campus. Maczko says, “I support fraternity and sorority life, and I believe they add tremendous values to the campus. The last thing we would want to see is something like this happening.”