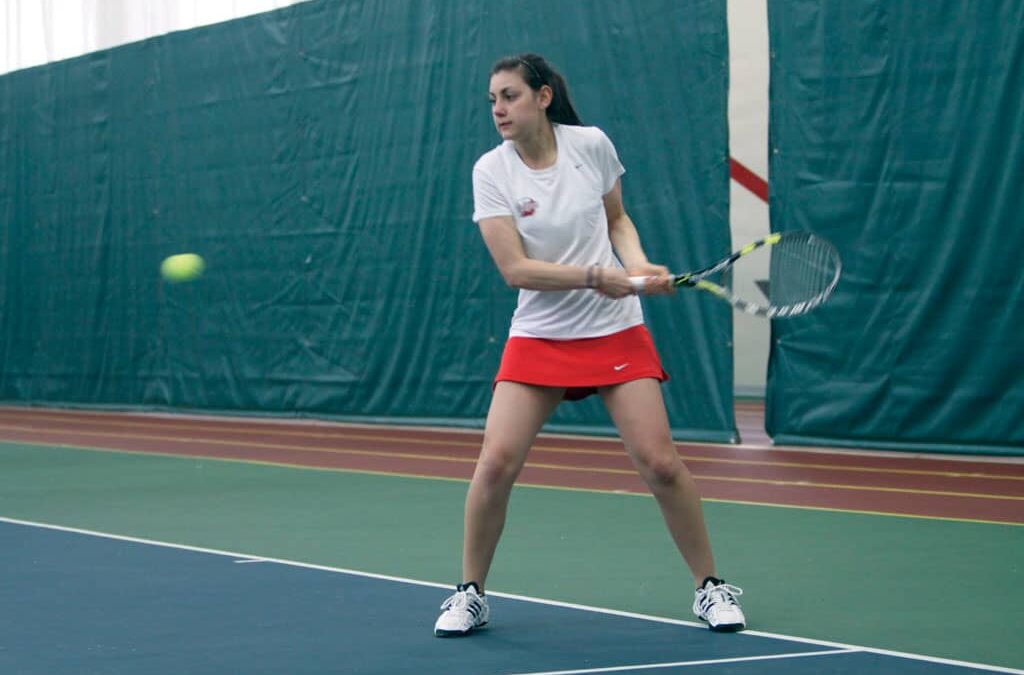 The Denison women’s tennis team is taking the NCAC by storm.

With a current record of 12-4, the team has been on a unforgiving roll, winning 10 in a row at one point, from late February until early April.

The streak has been impressive as they continue to strong arm seemingly superior opponents. Coming off of wins over a seven hour victory over Kenyon College and Division I George Mason University, the Big Red look to keep the momentum going.

With senior All-American Alex Marcell and junior Kelsey Geppner leading the way, the Big Red has only three matches left before the conference tournament begins on April 26th in Oberlin, Ohio. However, they don’t plan on letting up one bit.

Marcell and Geppner, the team’s No. 1 doubles pair, have been instrumental to the team’s success thus far, posting a 7-0 record during the teams 10 match win streak.

“Alex and I have been teammates now for three years, and we are close friends on and off the court. We do a really good job of communicating when we play together,” Geppner said.

According to an interview with the Denison Sports Network, Coach Peter Burling had this to say regarding the top duo, “Marcell is a stud. She came in as a one-star recruit but over time she has become a solid force that we totally rely on.”

Burling also noted in the same interview that Geppner is someone who plays the game right and even went as far as comparing her importance to the team to that of Miami Heat’s Dwyane Wade.

Geppner, who was unable to contribute for most of last season due to a broken hand injury, is back on the court and ready to help the Big Red compete for their goal of a conference championship.

“The team has improved immensely since last year. We have nine freshmen that have been tremendous thus far,” Geppner added.

The Big Red won the NCAC championship two years ago but with nine freshmen on this year’s team, some may wonder if they have the experience despite the veteran leadership.

“I strongly believe we can win it this year. The freshmen got some more experience under their belt this past weekend [at Midwest Invitational], and I trust they can rise to the occasion when necessary,” Geppner exuded.

Marcell and Geppner will need help from the freshmen class if they want to finish the year strong as well as compete for an NCAC title.

“Taylor Hawkins and Audrey Fitzpatrick are two of our strongest. Meg Chiumento,

Emma Forman, and Katy Barenholtz have also been doing a great job. We expect good things from this class in the future,” Geppner concluded.

They take on two of the best teams in the conference in Oberlin College and DePauw University.

They will travel to Oberlin this Friday and then face a very talented DePauw squad at home on Sunday.

The team, coming ferociously off a 10 game winning streak, is ready to put the last two losses behind them and push through the remainder of their opponents.