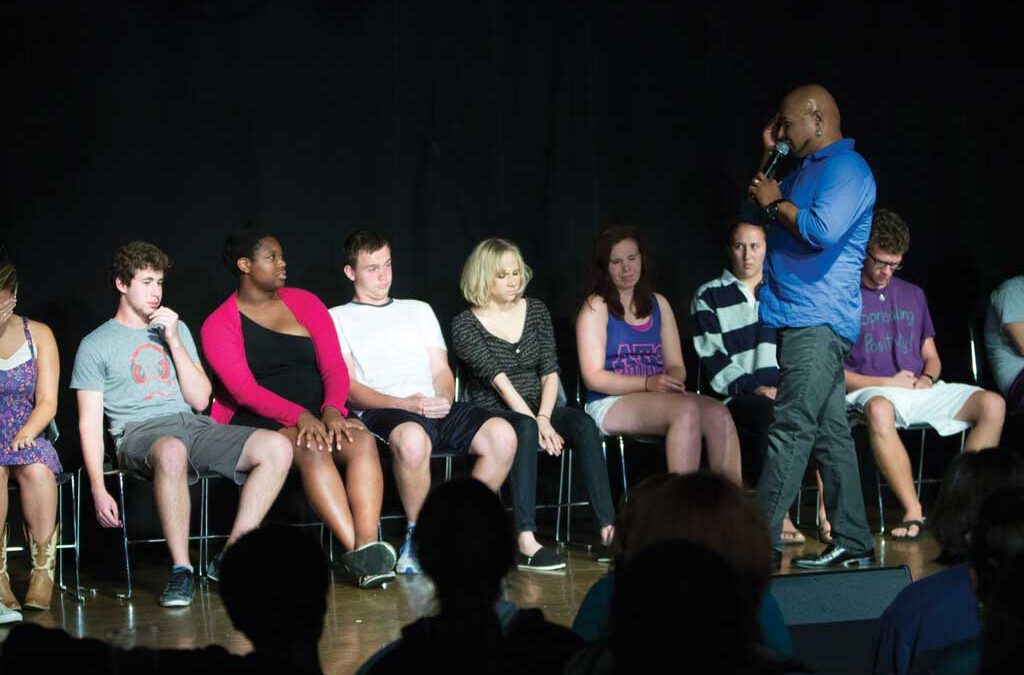 Hypnotist Sailesh returns to campus, proves to be a smash hit

As Sailesh, the hypnotist brought by the University Programming Council on Friday, Sept. 20 put it, “The average student goes into a hypnotic state 112 times a day.” Judging from the ample showing of students gathered on the Slayter third floor to see his show, many Denisonians are overachievers in that respect.

Named “THE BEST HYPNOTIST ON THE PLANET” by MTV Europe, Sailesh is a world-renowned performer specializing in comedic hypnosis. Having visited campus last Fall, Sailesh’s return to campus was warmly received, with several attendees of his previous performance returning for a second show.

Seeing the confidence and poise with which he carried himself and handled the night’s various beats, there was no wonder how this hypnotist managed to garner his many accolades. Sailesh began his show with an explanation of hypnosis, the real meat of the show came after members of the audience took the stage.

After being put into a hypnotic state, the ensemble of audience volunteers, which gained and lost members throughout the evening, were guided through a series of hilarious mental situations. These ranged from having participants react to a sudden Canadian coldfront to having them fall in love with the person to their left.  As the show progressed, commands grew more outrageous and physical. At several points, Sailesh persuaded participants into smacking their butts—and those of others—to the beat of the music playing.

The infectious experience of watching other people undergo hypnosis was nothing compared to the experience of being put under yourself, as this writer found out.

Part way through the show, Sailesh extended his exceptionally hypnotic hand to the audience and tested to see if any of us were in a “partially hypnotic state,” which I happened to be. This resulted in me joining the group of students on stage for the remainder of the performance, being made to “see” Sailesh naked, engage in an epic harp solo, and share a slow dance with the young man in the chair to my left. Though I was entirely aware of my actions, the circumstances of the performance made it difficult to resist the “power of persuasion” being employed.

When Sailesh had at last exhausted his bag of tricks, he closed out the show by thanking those of us on stage, “the real stars of the show” and by sharing some words of positive affirmation, giving the whole room a nice feeling to walk away with. First year Grace Bachmann said that the show had her laughing “more than she had all semester.” Her sentiments were echoed by sophomore Alex Woroncow, who called Sailesh “hilarious,” though he also noted that some parts of the performance, such as when several female participants were told to shake their breasts to untangle them from each other, were “kind of inappropriate.” Despite this mild criticism, Sailesh seems like a performer that resonates with campus, and hopefully will join us again soon.