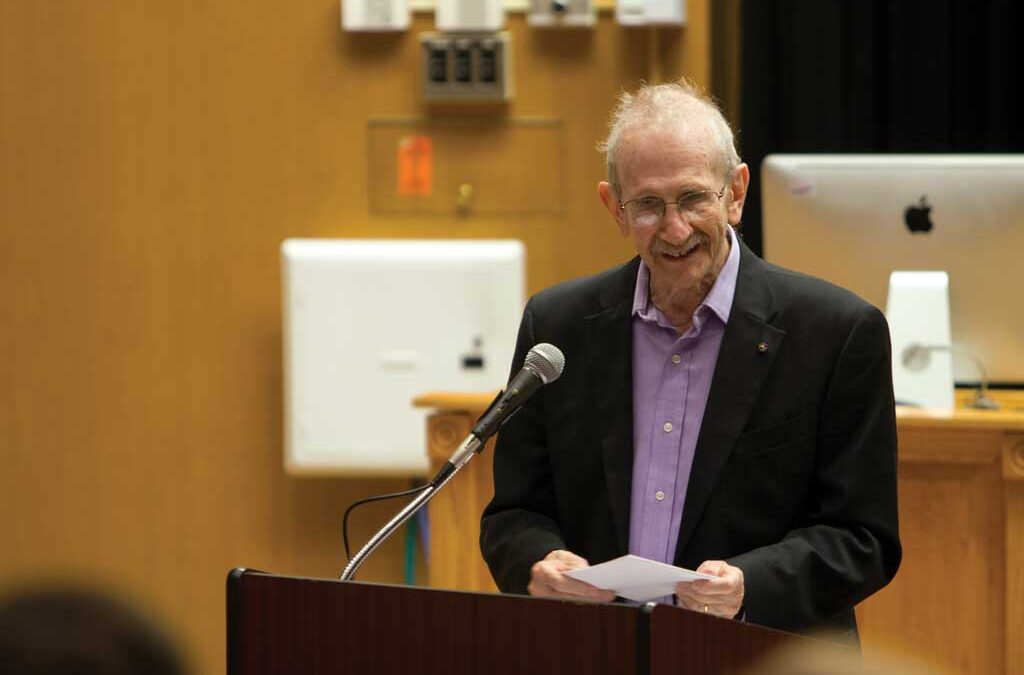 The hill has been host to some incredible speakers and artists over the years, but it’s not every year that our community is graced by the former poet laureate.

On Wed., Sept. 18 at 8 p.m., Pulitzer-Prize winning poet Philip Levine kicked off the renowned Beck Lecture Series in Herrick Hall with as much gusto an 85-year-old man could muster. For over 50 years, the Beck Lecture Series has been bringing amazing writers to Denison’s campus to speak about their life’s work and, despite his age, Levine proved he was the perfect choice to start the year off.

Quickly breaking the ice in the packed hall, Levine approached the night with some light humor saying “they tried to get me drunk at dinner, and as you’ll discover they were successful.” Levine even referred to himself as “a great bullshitter.” As the crowd became more comfortable with him and him with us, Levine read from some of his poems.

The first two poems, titled “Black Wine” and “What Work Is” helped the audience to get a feel of what kind of poet Philip Levine is. It is impossible to second guess the reasons behind Levine being made the national poet laureate and why he has won almost every award in his field with lines such as “feeling the light rain fall like mist into your hair, blur your vision” and “questioned the wisdom of playing with fire” and “to face the world as it was, everything was actual”. Levine’s poems have the ability to create music and evoke emotion in the listener.

Levine cited many of his influences as stemming from Spanish culture, jazz music, and his blue-collar roots. Growing up in Detroit, Michigan to immigrant parents, Levine worked hard in factories before going to university and eventually delving into poetry. On the side, Levine taught at a California State University in Fresno, California, and later served as a professor at the Iowa Writers’ Workshop.

Each of Levine’s poems tell a story. One poem, “The Mercy”, tells the story of Levine’s mother arrival to the United States aboard an immigrant ship called The Mercy. He described her struggles with English and navigating her way through New York City. Levine read, “she prayed in Russian and Yiddish to find her family in New York, prayers unheard or misunderstood or perhaps ignored by all the powers that swept the waves of darkness before she woke.”

Levine’s poems are mainly retold stories with a wonderful mix of his imagination. Levine spent much of the night telling light hearted stories about himself and making jokes at his expense, but when it came to reading his poems, Levine was all seriousness. Students who attended the lecture could only praise Philip Levine’s poetry. Alice Heider, a senior creative writing major from Barrington, IL, said “his poetry voice was more poetic while his speaking voice was friendly, casual.” Her friend, Jon Halper, also a senior and creative writing major from Chagrin Falls, OH, agreed saying Levine’s voice when reading from his poetry was “lively, yet very straight forward, to the point”.

Philip Levine captured the audiences’ attention from beginning to end. The respect he was awarded by the crowd demonstrated his importance and influence in this country. Levine read a total of five poems on Wednesday night, and each one was filled with emotion that grasped the audience, his powerful voice not letting go even after the night came to an end.