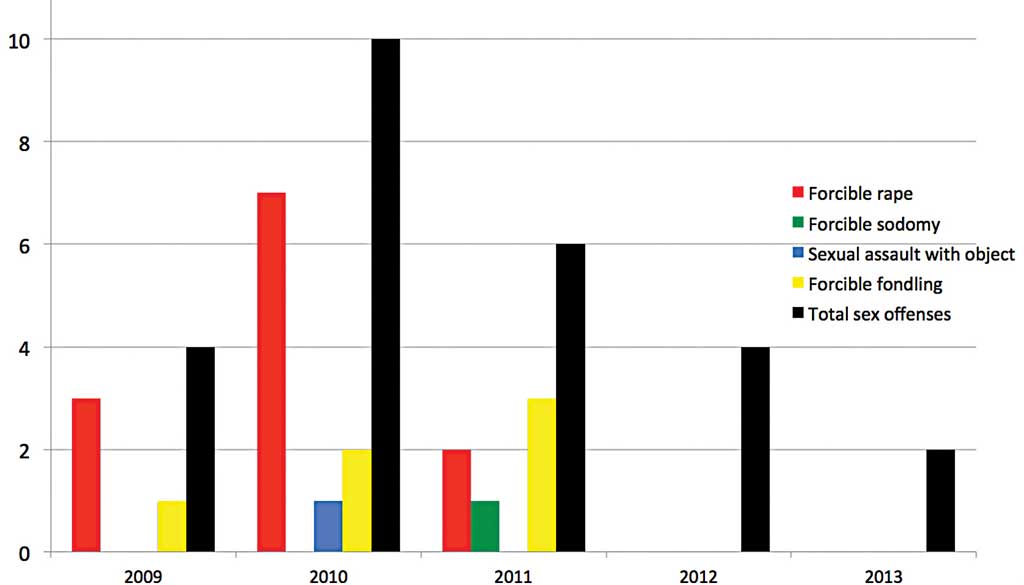 Security’s involvement in the investigation of sexual misconduct on campus now has changed from the old procedures practiced.

Instead of being involved from the beginning of the investigation until the end, security is now only involved with the initial investigation.

Director of Security and Safety Garrett Moore described security’s role in an investigation as “trying to tell a story or paint a picture of what happened. We try to get as much information as we can, especially the who, what, when, where and, why.”

Campus security is the first step a victim takes when he or she chooses to go through the school rather than the Granville Police Department (GPD).

Security will usually get a report from the victim with a Sexual Harassment and Rape Education (SHARE) Advocate in order for security to get the needed information while still maintaining a support system for the victim.

It is infrequent that security will receive a report of sexual misconduct near when the act occurred, but, if this is the case security will report it to the police, and will advise the victim to undergo an exam as soon as possible.

However, reports placed right after the incident occurred are rare. The process of a late report varies slightly from the early reports.

In the case of a recent report the assumption has been made that the victim does not want a criminal investigation because no physical evidence will be present.  The option to go to GPD is always available. Security is required to report all such incidents to the GPD.

Obtaining a written statement from the victim is the best way to move the process forward, so that the victim does not have to go through his or her story again, the report is also shared with the police.

Security is also responsible for sending out community alerts and sending out no-contact orders to the suspect in order to protect the victim as much as possible.

In order to further protect the victim the suspect will be moved to a different residence hall and be ordered to only eat at the dining hall in the area.

Moore made the point that the investigation process is now much more centered around the victim and the “goal is to give as much control to the survivor as possible.

“The act of violence survivors have faced has taken control from them.  We try to give control back… Anything that has happened to the victim has never happened because of something the victim has done. It happens because people prey on others who appear vulnerable.”

After a written statement is completed and information is gathered, security will give the victim options of what he or she can do.

“We have tried as a university to give students resources to go to for aid in cases of sexual misconduct,” said Dean of Students Bill Fox.

Denison has several resources for victims of sexual misconduct, including SHARE, Whisler Counseling Center, CSMART (Community Sexual Misconduct Awareness Response Team), and so on. The victim can also have a SHARE advocate present during the investigation for additional support.

“One of the reasons security is not involved from beginning to end is because having someone who knows how to balance the comfortability of the victim while getting information may not be feasible with an authority figure,” claims Moore. In other words, the presence of a non-student administrator tends to solidify student statements.

This is why Denison also utilizes the Student Conduct Board and Title XI for further investigation.

Because Security is involved only with the initial investigation, the remainder of the process is adjudicated via the University Conduct Board.

Every year, revisions are made to the Code of Student Conduct to deal with all cases of criminal activity on campus.

The UCB is comprised of students, faculty, and administrators and must have at least one woman, man, and person of color in an effort to ensure equity.

Members of the UCB are formally appointed by the DCGA President upon the recommendation of the Office of Student Conduct.

Students who serve on the board are able to remain in their position for one year, and administrators and faculty serve terms for up to two years.

Additionally, no member of the UCB may participate in a proceeding regarding his or her own alleged misconduct.

Since gender targetting plays a role in cases of sexual misconduct, Title XI plays a large role in the process because it aims to bring equity in gender across every aspect of student life.

Additionally, Title XI aims to deal with Campus Climate, the overall attitude of campus, and how the atmosphere is affecting students and students’ lives.

Toni King, Associate Provost, faculty member and Title XI Coordinator, mentioned that “Title XI deals with all barriers related to gender equity across campus, including those of sexual misconduct.”

Upon receiving a complaint or report, the Office of Community Rights and Standards will review the case to determine if formal charges should be filed.

If formal charges are made, the student(s) involved will be asked to attend a student conduct meeting to resolve the issue.

In the case of a student admitting guilt to the allegation, no further hearing will proceed and disciplinary action will take place. Punishment will vary depending on the severity of the crime. Expulsion, suspension, and revoked privileges are common.

On the other hand, when a student denies the charges, a formal hearing will occur and responsibility or non-responsibility for the crime will be determined by the board.

After the hearing, the student accused will receive a letter outlining the findings and sanctions of the case and all deadlines for completion.

Students are able to appeal their sanction, but when the student is expelled or suspended, he or she is required to leave campus within 24 hours and appeal the case off-campus.

In the case of expulsion, the student is to never re-enroll in the school, and all credits earned will be unaccounted for.

It appears as though the numbers of attacks have gone down in past years, but it is important to keep in mind that it might unfortunately be inaccurate because of how most incidents go reported.

Additionally, Moore says, “Unfortunately, we know these things happened every weekend. The low numbers may suggest people are not comfortable with reporting these incidents.”

In the midst of the negative events on campus, “it is important to acknowledge that Denison is primarily a safe campus, but crimes of violence do happen,” said Fox.

There are actions one can take to help prevent issues of gender-based discrimination, sexual assault and rape, and other crimes of violence.

Fox added, stating, “there seems to be a real sense of empowerment when students get together to discuss issues of sexual assault, rape, or related crimes.”

It is also important to increase bystander intervention, and to look out for one another on and off campus.

“You’re putting young people who have never been away from home for a long amount of time. We give people a lot of freedom in college… we give them the freedom to make good decisions and bad decisions, and bad decisions can typically have bad consequences,” concluded Moore.

Some students who have had personal experience with allegations of sexual assault believe that the process outlined above is not enough. These students appear to favor police intervention over a campus-only investigation in cases of rape and sexual assault.

One male student, who personally knows a victim of sexual assault, speaking on the condition of anonymity, says, “Students joke about the Denison bubble all the time, but, in cases of sexual assault, perpetrators notice that in previous incidents, justice was served by the campus, not by the police. The justice served by Denison is not nearly enough of a deterrent for the perpetrators.

“I personally have heard of two incidents where the campus acknowledged the fact that sexual assault occurred, and in both cases the perpetrators remained on campus,” this student says.

“Crimes as abhorrent as rape should not just be let off, and student perpetrators should be treated just as any other citizen. Such cases should only be handled by the police.

“If found guilty after a fair trial, a student should be removed from campus because they are a threat to the Denison student body,” this student continues. “I am unhappy with Denison’s reaction to these cases, but mostly I feel uneasy and unsafe.”

Another male student, also speaking on the condition of anonymity, falls in with these sentiments.

“I think that there are certain priorities within the administration that are not the most beneficial to the Denison student body,” says the student. “I was under the impression that several sexual assault cases were reported within the last week that the administration was aware of and no significant action of investigation by law enforcement or by Denison’s security was taken.”

This other student continues, “Denison’s administration seems to be more focused on assault cases, arson, and vandalism than cases of alleged sexual assault. It seems like [it is] partial to accusations that really should be handled by Granville police.”

“I feel unsafe in general,” says this second student. “I would like to see the administration treat alleged sexual assault incidents as crimes just as serious as physical assault and responsibilities handed over to local law enforcement.”

Roomates start a new journey in the Peace Corps