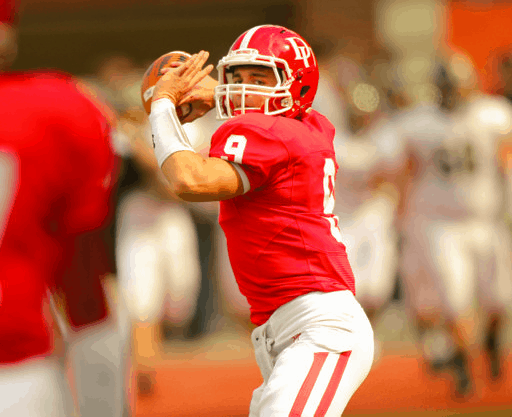 Atmospheres are pretty great. They evoke a mood, a touch, a smell, they can evoke everything and anything.
And for Denison Big Red Football, the under-the-lights atmosphere on Saturday night evoked dominance with a bit of heart-warming hope.

Among the players who excelled in this game, one stood out among the rest. And that man is junior quarterback Brandon Sklenar.

Sklenar tallied 275 yards of total offense, three touchdowns, a 72.7% completion percentage and a mountain of respect from his team and coaches during his first game as a college football starting quarterback.

“This is the first time since high school that I’ve played with a Quarterback who is younger than me,” mused senior running back John Wilson. “A Quarterback playing his first college game, there is definitely going to be a learning curve and I think he understands that and he’s going to do what he’s gotta do-filmwise and studying.”

Sklenar was the main lightning rod for DU’s offense early, lobbing a 49-yard touchdown pass to DeShawn B rown with less than a minute into the game and on just the second play of the game.

And only 40 seconds after that, yes just 40, Sklenar sprinted 20 yards for another TD culminating almost right after senior Joel Elliott’s impressive interception deep in opponent’s territory. “Brandon played well tonight. Really excited about the defense as well,” says offensive coordinator, Austin Holter. “[Sklenar’s] a junior and he’s going into his first college start so there is a lot he still has to work on but you can tell he is a special player and we are really excited about the progress Sklenar’s made so far.” But Sklener’s impressive stat line wasn’t done yet, not even in the first quarter.

He had yet another passing touchdown, this time to senior John Wilson for 15 yards.

In total, Denison had 21 points in just the first quarter, including 14 points within just the first two minutes of play, all coming from Sklenar.“I think Sklenar did really well,” says 4th year head coach, Jack Hatem. “He’s a great athlete. It’s a fun offense with him running around.” But Sklenar’s dominance isn’t the whole story, actually, according to Jack Hatem, the whole story has to do with speed.

“We have some fast guys. I think it’s hard to defend all of them,” says Hatem. “The offensive coaches did a real nice job utilizing all of that.”

Holter has a great reputation within the DU program as he is largely responsible for the development of Denison Football legend Max Paulus ‘13.

“Holter is a great leader,” remarks Sklenar. “I’d follow him into battle.”

And now, with total reigns over the offensive side of the ball, Holter’s schemes and plays showed serious promise in the season opener.

One of the more successful offensive weapons was Wilson, who totaled 102 yards on only 14 carries, accumulating an amazing 7.3 yard per carry average.

This is a big difference to his stats last year, where he had only 48 yards on 13 carries throughout the entire year.

“It starts with the O-line,” Wilson says. “They did a great job in front of me. We’ve been working the run game a lot. With a guy like Sam
[Fioroni ‘13] gone, it’s a big shoe to replace and we did a good job and the numbers show that for sure.”

John Wilson looks to get his first crack as the feature running back this season after backing up Fioroni for many years, and he seems to be poised for greatness after his 109-yard game

And while the offense flourished under the pistol/zone-read formation that Holter instilled, the defense also dominated with their schemes.

“The defense really played well and put us in some situations with good field positions so we could capitalize,” Holter adds. “For a young group, I’m really proud of them. Guys up front did a great job.”

The three other players who got interceptions were sophomore Zach Pewitt, freshman Andrew Baird and senior Teddy Kuntz.

Baird, in his very first college football game, led DU with six solo tackles as well as the interception which he returned for 28 yards.

This incredible defensive performance is very promising in comparison to last year, where the Bid Red D only totaled one interception throughout the entire year.

For the near future the crystal ball seems bright, but with a flurry of improvements. For instance,basic miscues seemed to be the achilles heel for the team who lost 90 yards on ten penalties.

“We have to work on fundamentals. Make sure we are reading our cues, making sure we are taking care of our assignments,” adds Holter. “Obviously, we need to continue to develop. We have a lot of young players playing right now, a lot of them playing in their first actual college football game. I tell them to ‘Enjoy the win but come back tomorrow ready to work’.”

Dominating every phase of the game: Big Red baseball is rolling