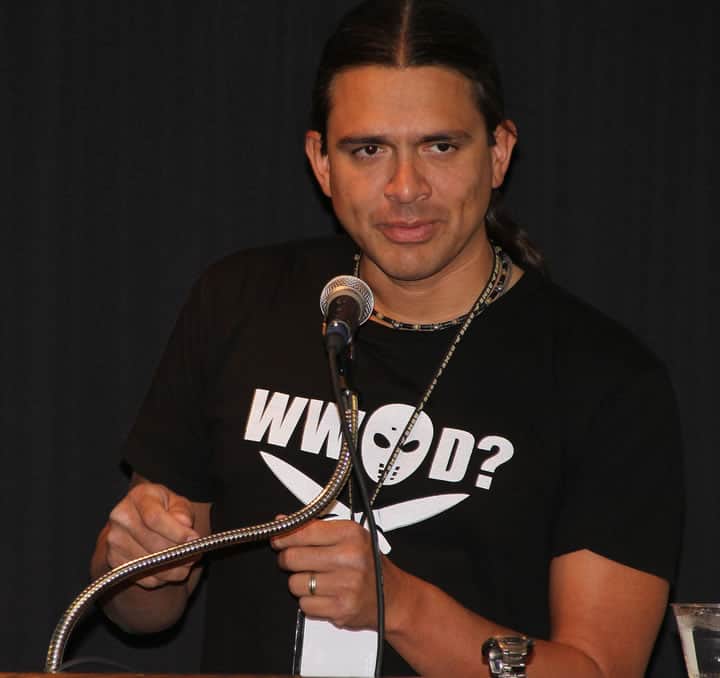 When one hears horror, one automatically thinks of scary movies, Halloween, the paranormal, and their greatest fears. All of these and more fall into the genre of horror fiction, but writer Stephen Graham Jones, a popular fiction author, puts his own twist on the scary.

A Blackfeet Native American from West Texas, Jones has made a name for himself in fiction by experimenting with his writing. He has become a multi-genre writer who is successful because of his unique voice and his ability to write in all genres without sounding forced or boring. Jones writes whatever and however he wants to write. These abilities to simply write are what make him an outstanding author.

October is the ideal month to invite Jones to share his work with our campus. With everyone gearing up for Halloween, it is always fun to hear anothers experimenting with the popular holiday. “Stephen Jones is one of my favorite authors,” said Sarah O’Donnell, a sophomore. “His work is inspiring and so awesome; I wish I could pick his brain all night.”

Although the Barney-Davis Board Room wasn’t a packed house, the students and professors who came had no reason to be disappointed.

Instead of scaring the crowd, the easily distracted author kept making the crowd roar with laughter as he went off on tangents and shared funny personal stories. With titles such as “Zombie Bake-Off” and “Flushboy,” one would think his novels are not all that frightening.

Those who simply glance at books without looking at the summaries may be thrown off by Jones’s bizarre titles, but that shouldn’t deter any reader. His novels are filled with creativity and even more bizarre lines such as “His words gave me license to feed my other gluttonous self,” “the first time my dad showed us the sacred tablet of broken rain checks” and “like humans were descended from dolls and Muppets were the missing link.”

The question and answer session ended the night, but not before the crowd picked his brain about what inspires him, what he believes is the scariest thing, which monsters he prefers, and even if he is Team Edward or Team Jacob.  Jones shared that he believes the world doesn’t make sense and he therefore tries to make it make sense in books. “The pages are like a jigsaw puzzle and when they come together they make sense,” said Jones.

Stephen Graham Jones is the type of author who writes his best novels when he doesn’t have to think about the story. It simply flows, and when the reader can identify and relate with his main characters, then he has written a successful novel.

And for those who were wondering, Jones is all for Team Edward.

Happy Death Day should leave audience with a smile