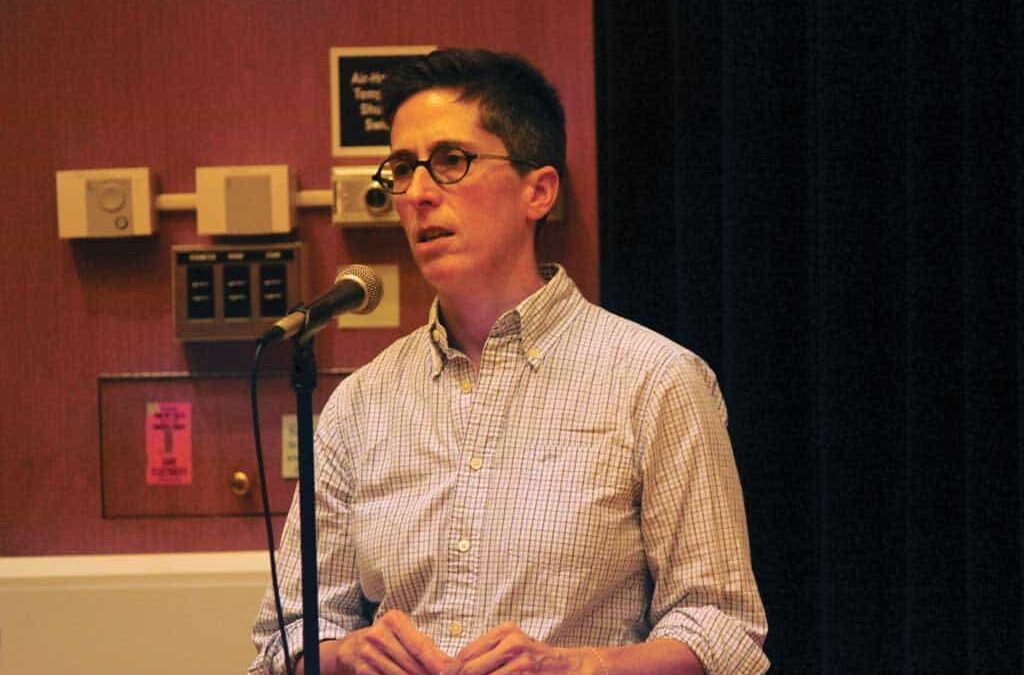 The arrival of American cartoonist Alison Bechdel caused quite a stir on campus last week. Bechdel, originally best known for the long-running comic strip Dykes To Watch Out For, arrived on campus the 22nd of October for multiple events sponsored by the departments of English, Education, Women’s Studies, Queer Studies and Studio Art, the Spectrum Series, Laura C. Harris Symposium, and the Harriet Ewens Beck Fund, as well as student organizations Safe Zone, Outlook, and Denison Feminists. After a long day of speaking engagements and travel, Bechdel stayed strong for her 8 p.m. reading in a packed Herrick Hall, where hungry fans waited to hear her speak.

“People say that cartoonists are mediocre writers and mediocre artists,” said Alison Bechdel at the opening of her reading that was part of the Beck Series Lecture. This may be true of some cartoonists but it’s certainly not true of Bechdel. Since the mid eighties, Bechdel has been working to earn her spot in the literary canon. With comics and graphic novels gaining clout in literary culture, this has been no easy feat. However, with the release of her lively, humorous graphic memoir, “Fun Home,” Bechdel has achieved widespread acclaim for her work. Bechdel’s queer comics that are, according to senior Sam Heyman, “full of colorful, rough around the edges portraits of queer culture” have won her various awards such as the Eisner Award and the Lambda Literary Award.

Though she is revered as a feminist humorist whose work often sparks laughter, Bechdel’s work is full of emotion and dives into the inconsistencies and ambiguities of life. What distinguishes her work from other cartoonists’ work is her philosophy behind it.  During her reading, Bechdel showed the complex relationship that she had with words even as a child by sharing pages from her childhood diary. In Fun Home, Bechdel describes a period in which she began to doubt “the accuracy of her recollections,” clarifying many entries with tiny scrawlings of “I think.” She eventually reached a point where she scratched out each entry with a symbol that, she reasoned, would protect them from scrutiny, while subsequently destroying them in the process. This obliteration of each diary entry foreshadowed the long slippery relationship Bechdel would have with reality. From her childhood, Bechdel learned that language was unreliable and appearances were deceiving. It was these uncertainties and falsehoods that drove her to become a cartoonist. Bechdel explained how she found that as a graphic novelist she could triangulate between language, which is inconsistent, and appearances, which almost always remain elusive. She reasoned that if she somehow married words, which she regarded as capricious, and pictures, which she considered misleading, she “could arrive at a truth and find stability,” and help others find this as well.

During her reading, Bechdel shared with us not only her reason to become a cartoonist, but also how she makes her cartoons. To the audience’s surprise and delight, Bechdel showed in great detail how she creates her cartoons. Bechdel took us behind the scenes of a cartoonist’s life by demonstrating her creation process. However, Bechdel did not just reveal her current day-to-day work. She exposed a darker part of her past and showed two rejection letters she received. One rejection letter was a very blunt letter from the Chicago Institute of Art. When she read the letter, which implied that her art was not up to their standards, disapproval from the audience echoed throughout the hall. Though the audience hated hearing that Bechdel’s work, which they love so much, was initially rejected, her rejection letters were a source of inspiration for those whose art and work have endured similar rejection. Many look to Bechdel as a personal hero of theirs and find that her work truly impacts the way they look at life. Bo Maag, a senior majoring in Finance at the Ohio State University who attended Bechdel’s lecture, said, “Alison Bechdel’s work is hilarious and meaningful. Through her comics, she conveys the realities of life that often seem to hidden and shoved into the darkness.”  For Maag and many other fans, Bechdel has unearthed the complex relationships we form in life and the tumultuous legacy that can be left behind by loved ones.

The geoscience department departed on their annual fall trip