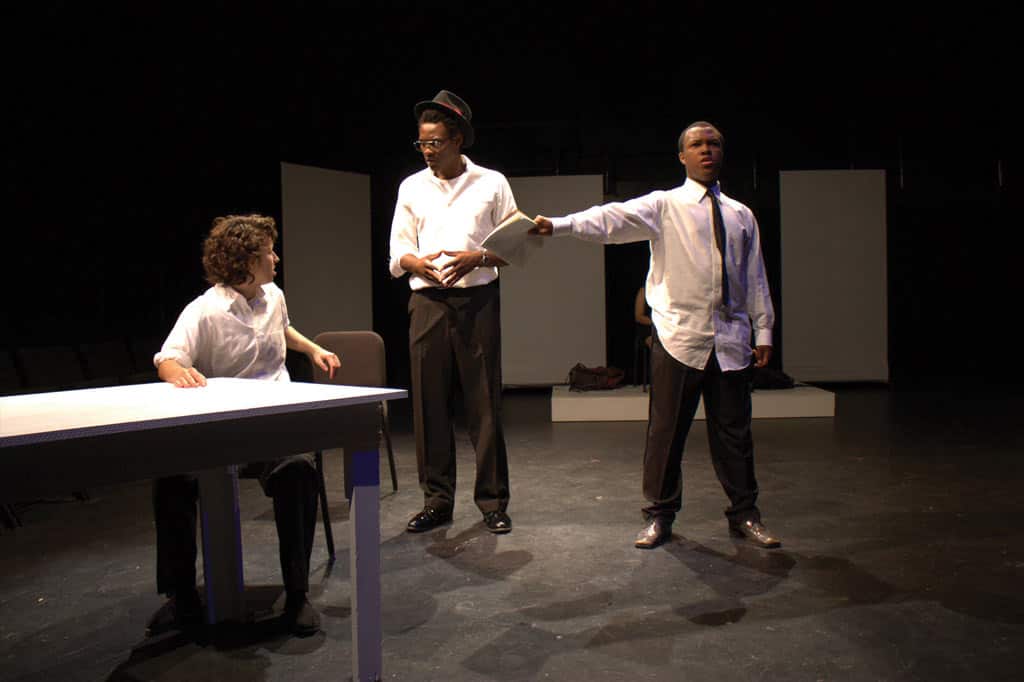 With the world premiere of Familiar Strangers, a play written by recent DU graduate HongYi Tian, the Theatre Department’s mainstage theater season has begun at last. Directed and co-produced by junior Will Brackenbury, this Fall Festival entry tells the story of Zhou Jianyu, a young man enduring the pressures to succeed imposed on him by his parents, and the effects of those pressures on his parents themselves.

Though this rough plot summary makes Familiar Strangers seem like explored territory, the play’s Chinese setting, inventively non-linear structure and uniquely characterized narrator distinguishes it as a story worthy of another look.

Like many productions staged in the Burke Black Box, Familiar Strangers employs a plain, minimal style to tell its story. A table and a dozen chairs accomplish the task of rendering the play’s various scenes. Fortunately, theater is a medium in which leaving a little up to the imagination can be a credit to the success of a production, and the sparse design of Familiar Strangers serves as an appropriate accent to the drama of aspirational restriction portrayed by the show’s actors.

Considering many of the actors featuring in Familiar Strangers are new to the Denison main stage, there’s a lot of good to be said for their performances. Sophomore Aaron Robertson, who previously performed as Bert in last spring’s “Adventures of a Black Girl in Search of God” gives a particularly affecting turn as the play’s lead, Zhou Jianyu. While many of the play’s other characters resist emotional outbursts, managing to cope with challenges their lives present them with, Jianyu goes through a tumultuous phase of his life and Robertson, in his panicked and furious moments, is able to portray this struggle poignantly.

Although the play’s second act is predominantly dramatic and even somber in tone, there is a decent degree of comedy present in Familiar Strangers, and along with Robertson, the characters of Nanzi and The Observer, played by junior Leona Vander Molen and senior Kym Littlefield respectfully, do a great job at bringing this comedy across. While Littlefield’s Observer has a wry, enigmatic air to him, Vander Molen’s Nanzi provides more overt comic relief, serving as the straight man to Robertson’s often flustered Zianyu. The banter between those two characters, such as the scene in which they hilariously impersonate the rigid, out of touch adults in their life, was a highlight of the play.

First years Rhiannon White and Ryan Mitchell, who play Zianyu’s mother and father respectively, give convincing, sometimes even charming performances, but they don’t embody their characters and their struggles with the same intensity and richness as their co-stars. All of this said, the two actors clearly have potential, and I have no doubt they’ll be returning to the stage soon.

Audience reaction to the opening night of Familiar Strangers was warm, with many audience members, such as junior Emily Metcalf, expressing particular praise for Robertson and Littlefield. “Hearing Aaron raise his voice was just… intense,” said Metcalf, referring to some climactic scenes toward the end of the play. Another attendee, senior Meghan Neuenschwander, was “super interested in the really subtle things,” such as the gradual changes in Aaron’s movement style and the level of neatness in his attire throughout the show. Though some Chinese students who came out to see the play praised the authenticity of its language, it’s worth noting that the trials undergone by the play’s characters are not indicative of all citizens of China.

At the beginning of the semester, there were some mumblings among students about how well the producers, directors and actors involved in the Festival would be able to realize their creative visions in the relative absence of department resources. Judging from the captivating experience I had on Friday watching Familiar Strangers unfold in the Burke Black Box, I feel a renewed confidence in the abilities of Denison’s student dramatists and an excitement for the future of the Festival.

Middletown a triumph for all; especially for frosh Weaver