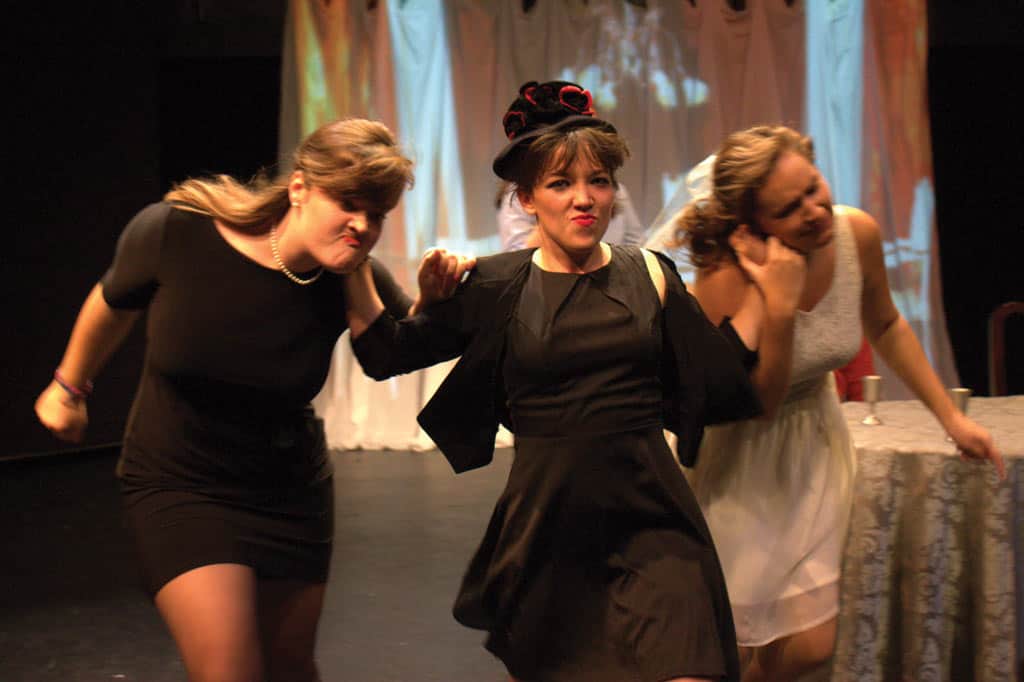 Putting on a Shakespeare production is often very challenging for a theatre company.  Evidently, Denison students aren’t afraid of a challenge, as they took on two.

“A Night of Shakespeare’s Comedic Couples,” one of two of the theatre department’s fall festival productions, featured selected scenes from “The Taming of the Shrew” and “Much Ado About Nothing.”  Both acts were completely produced, designed, directed, and played by students on Oct. 5, 8, 10 and 13 in the Burke Black Box Theatre.

Devin Daro, a senior from Wickliffe, Ohio, directed the abridged version of “The Taming of the Shrew,” the first act of the night.

“It was a huge project to tackle, especially right at the start of senior year,” said Daro, a psychology and theatre double major.  “I was fortunate to have a wonderful cast that was creative and energetic, and willing to bring new ideas to the table.”

Among this cast was first-year Katie Scott, an undeclared major from Louisville, Ky., who played the sassy and sharp-tongued Katherina the “shrew” and eldest daughter of Baptista (played by sophomore creative writing major from Kirtland, Ohio, Michael Somes).  Scott handled the role with ease, not afraid to show her character’s feistiness with screams, slaps, and physical confrontation.

Playing opposite Scott was the defiant and witty “bad boy” Petruchio, played by senior Dylan Reaves, a religion and sociology double major from Lawrenceburg, Ky, whose role it was to court and domesticate Katherina to the amusement of the audience and his fellow players.

Scott’s small frame against Reaves’s towering height, at least a foot’s difference, only enhanced the comedic value of the couple.

The minimalistic set allowed the audience to focus on the clever Shakespearian insults that were tossed back and forth.

Taking a totally different direction, “Much Ado About Nothing,” directed by senior Grace McQueeny, transported the audience to the Wild West, complete with performances by a five-piece student bluegrass ensemble.

At first it was somewhat hard to process the Shakespearian language while watching the characters, in full hoedown attire, dancing around the hay bales on the set.  But quickly enough the audience was engaged, even clapping along, thanks to the energy that the actors brought to the script.

Paige Vosmik, a sophomore computer science major from Courtland, Ohio who saw the performance, agreed that the western theme was a fun approach to the comedy. “Half the time nowadays, when people put on Shakespeare, they do some sort of adaptation,” she said.  “It’s always interesting to see what the director comes up with.”

The “comedic couple” of “Much Ado” was also well cast.  Emma Miller, a sophomore English major from The Woodlands, Texas, played Beatrice, who falls in love with Benedick, played by Michael Herman,  a senior German major from Woodridge, Ill.  The two had good chemistry, even though they did not admit their feelings about one another until the very end.

The theatre department has a lot of budding talent to look forward to in upcoming productions, as first-years and sophomores played eighteen of the twenty-four roles.