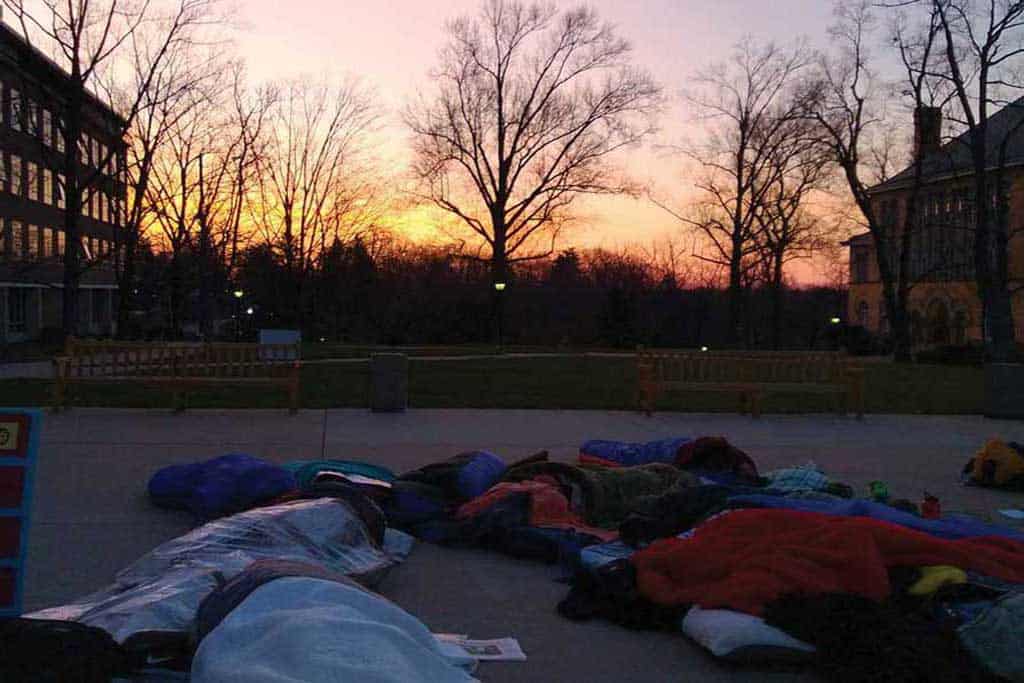 Over the years, Denison university has prided itself on its community service. Homelessness and Hunger Week has made it its goal to raise awareness about those in need and aid those in the surrounding communities, especially the Newark and Heath areas, that require help.

Homelessness and Hunger is a committee under the largest student organization at Denison, the  Denison Community Association (DCA).

No exact year is known for when Homelessness and Hunger Week started, but board members have found posters on Denison’s campus that dates back to 1998.

In all the time the Homelessness and Hunger (H&H) board has been in action, the group has made much progress.

This board is comprised of a President, Vice President, Treasurer, Secretary, Public Relations, and Volunteer Chairs.

Public Relations Chair Rachel Auerbach ‘16 gave her description of the week as “an opportunity not only to do service but to educate ourselves and one another on the issues of homelessness and hunger.”

The committee used to be relatively small, with only three people making up the board. However in the past couple of years that board has been expanded to six people.

Having a larger board makes the committee more organized and productive in putting on events such as Homelessness and Hunger Week, says Auerbach.

November is the national Homelessness and Hunger month, but the group chose to have the week take place in October because of events similar to the sleep out on Academic Quad.

The month of November is expected to have events and speakers related to the Homelessness and Hunger program.

Homelessness and Hunger puts on two programs per year with the aim of further educating students about the problems that are affecting millions of people, domestic and abroad.

Students had the opportunity every day in the past week to participate in various events, donate meal swipes, and raise awareness regarding poverty.

The week started out on Monday with a simulation hunger banquet that placed the attending students in different classes, jobs, familial dynamics, and countries.

Students received the new description of what class they were in and had to act accordingly. While the week focused on helping those in surrounding communities, the hunger banquet also educated students about international hunger crises abroad.

On both Tuesday and Thursday student volunteers made sandwiches on campus to be donated. One goal of the week was to make roughly 400 sandwiches, but by Tuesday, a total of 350 were made and around 520 were donated at the end of the week.

The sandwiches made were donated to organizations including Salvation Army, New Beginnings, and others that needed food.

Wednesday’s activities included a film screening of the movie Food Stamp, a documentary that traced a family’s efforts to try to live a healthy diet on food stamps, and a chilly camp out on academic quad in the evening and night.

Auerbach attended the campout and said the event “had a great turnout… and we even began to worry that we would not have enough sleeping bags for people to use.”

The week was cut short because of events surrounding the presidential inauguration, but the results were more than satisfactory for participants.

The response to meal swipe donations was so overwhelming that the H&H board has been considering saving some of the swipes for Thanksgiving and/or Christmas. Additionally the sandwich donations might now be a monthly occurrence.

Auerbach mentioned the goals of the Homelessness and Hunger board as well as some of her favorite aspects of the committee.

“The goal for any volunteer organization is to help people, and Homelessness and Hunger week is an opportunity for the Denison community to come together, volunteer, and do a lot of good for those less fortunate….anyone who wants to volunteer can always contact us. We always are in need of more volunteers.”

In regards to the meetings that take place every week Auerbach stated that improvements were being made to make the time the committee spends together more interactive and thought provoking.

“One of the things I advocate for is group activities. We’re not just sending out emails, and bonding with people with similar interests for what they want to change is very important.”

Last year H&H was recognized and awarded the Knobel Award for service organization of the year.

The Homelessness and Hunger board is an umbrella committee under the largest student organization on campus, the Denison Community Association, which has the goal of improving the lives of people in the Granville area.

DCA has been providing community service for 71 years this November and aims to have students become more involved with the surrounding communities.

DCA houses roughly 20 other committees, all of which are associated with doing some sort of community service.

Most extant standing committees were started by students who had done similar work in their high school careers and want to continue to do that work on Denison’s campus.

Along with the initiatives taken by Homelessness and Hunger, DCA has put into action a new food recovery program that donates leftover or excess food from the dining halls to organizations in the area.

Food Recovery is working alongside the sustainability fellows to ensure that food does not go to waste and instead goes to those who need it. Grab-and-go items from Slayter, as well as food from meals are eligible to be donated.

DCA has been actively trying to get more people involved with the food program as well as other DCA committees.

Every Saturday students have the opportunity to try out DCA’s activities and become more involved with service on campus.

Past Saturday service events have been associated with apple picking, taking school children bowling, babysitting children for single mothers in counseling services, among others.

In order to participate in a Saturday service project students can speak to a DCA board member or sign up in the Alford Center for Service Learning, which serves as DCA’s office in the basement of Higley Hall.

Even though 70 percent of the campus will have been involved in some form of community service over the span of four years, “it is surprising how many seniors still do not know about DCA. I do not think we are out there enough. Every year we try to get what DCA does for the community advertised more,” says Susie Kalinoski, DCA’s advisor.

DCA also tries to make sure students have the options to participate in community service similar to their major. A pre-medical student could work in hospice, or an education major could have an opportunity to tutor kids.

In general, DCA, just as the Homelessness and Hunger committee itself, has had a huge response from the students in the 2012-2013 school year.

Kalinoski has been a liaison between the students and the communities for 11 years and believes it is important “ to have students to not only live the DCA’s mission statement but also Denison’s mission statement of being an active citizen. Part of that is realizing that some people don’t have it as well as others but there are things we can do to help as a community”

Kaye Hartman, volunteer coordinator for the Salvation Army in nearby Newark said, “We have had an association with Denison for as long as I can remember.”

Hartman has been involved with the Salvation Army for 40 years, and has been acting as volunteer coordinator for the past four years in Newark.

The Salvation army operates an emergency food pantry, homeless shelter, and soup kitchen for the people who use their services.

As of right now the Salvation Army homeless shelter is at full capacity (60 people) with 15 children under the age of 12.

The soup kitchen provides a free hot meal twice a day and is said to serve an average of about 314 people a day plus the 60 people that the homeless shelter already serves.

The emergency food pantry the organization provides is a last ditch effort for those who need food.

If a household has already used all of the provided food stamps, money, and has already visited the local food pantry in their community, the emergency food pantry is the place where the families would go to obtain food.

For the 2012 year, 538 families traveled through the emergency food pantry and in 2013 the numbers have already surpassed 2012 with 684 households and counting.

Thursdays have been deemed as a free food giveaway day for the shelter, and some of the food donated has come from Denison in the past.

In the month of September 2013 a total of 351 households (1145 people) sought help from the Salvation Army every Thursday. 298 of the people were children under the age of 18.

This past Thursday, September 10, around 80 households came to the organization for food.

With the numbers being so high in the shelter, kitchen, and food pantry, Hartman remarked that “Denison has been wonderful with helping us over the years. When you’re feeding over 300 people a day it takes a lot of food and work, and the help we get from Denison is greatly appreciated.”

The sandwiches made during the Homelessness and Hunger week have been used on and off throughout the past week to feed those who go through the shelter.

Additionally, Hartman discussed how the Saturday Service has been a tremendous help to the shelter.

Hartman mentioned the concern of those the Salvation Army serves in response to the government shutdown. A lot of people are now concerned about food and money as well as having money for the holidays.

Hartman spoke of how the organization is always in need of more help especially once the holidays approach.