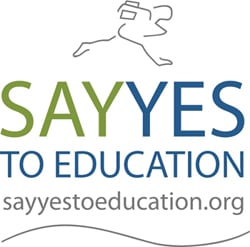 Denison’s new partnership with Say Yes to Education will have two results, according to President Adam Weinberg, and both of them good. Weinberg says that Say Yes will bring “some really amazing seniors” to the student body, as well as “raise… visibility in other parts of the country.”

A new full-tuition scholarship will come to campus through Say Yes to Education, a nonprofit organization that aims to bridge the achievement gap between urban and suburban students, according to their website sayyestoeducation.org.

To achieve this, Say Yes mentors students in Harlem, Philadelphia, Buffalo, Hartford, and other areas from kindergarten through their senior year and then, through scholarships, work with colleges to enable them to attend the school of their choice.

Jacques Steinberg, the Senior Vice President of Higher Education at Say Yes and a former New York Times education editor, knew President Weinberg before he set foot on the hill. “That’s probably how we got on their radar screen,” Weinberg said. “He knew I was coming to Denison and just inquired whether Denison would be willing to participate.”

He next presented the idea to Perry Robinson, the director of admissions. “Adam asked me about it, and I talked to some of my colleagues, and we all decided this would be a good step to take,” Robinson said.

On Sept. 18, Say Yes announced their eleven most recent partner schools, a list that includes Denison alongside Vanderbilt, Rice, Princeton, and Cornell Universities. Students who are in the Say Yes program and are interested in Denison will go through a normal application process, and when accepted, they will receive a full-tuition scholarship according to Director of Financial Aid Nancy Hoover.

Denison currently provides seven other full-tuition scholarships, as well as the Posse scholarships, each of which offers a $40,000 value each year. According to Hoover, the reduced tuition revenue from these is made up by other sources, partly from endowments. “The university is willing to reduce our revenue from that source to help make the student be able to afford Denison,” Hoover said.

This has been the case with the Posse Foundation, who send groups of 10 students from specific cities to the same school. At Denison since 2000, there are currently 79 Posse scholars on campus, one of whom is Sindy O. Pimentel, a junior from Boston majoring in sociology and anthropology.

“I came to Denison because of Posse,” she said. “The fact that there were other students also coming and that there were previous Posse scholars here made me feel a bit more comfortable.” The Posse Foundation builds on this, using the principles of community to enable students to succeed. Pimentel said, “My posse is very involved on campus in such different areas… sometimes we bump into each other and it gives, at least me, the best feeling in the world to see a person that I know I love and loves me back.”

Many Posse scholars have gone on to achieve remarkable success within the Denison community.

DCGA president Ana Morales, ‘15, is a Posse scholar, as was Abdi Ali, ‘13, who returned to campus yesterday to discuss the results of his Davis Project for Peace grant. These accomplishments bring to mind those of Say Yes scholarship recipients, including Ben Burdick, a senior at New York University who has interned at the CERN international research center, and Amber Jackson, a 2012 graduate of Syracuse University who is teaching English as a second language in Ireland.

“Posse has… demonstrated to us the power of what can happen when we partner with innovative organizations that are working on issues we care about,” President Weinberg said, and others seem to share his optimism. Hoover said, “It will enrich the fabric of diversity that already exists at Denison.”

The access that Say Yes promotes is a priority for Weinberg and an ongoing part of Denison’s mission.

“We’re very proud of what we’ve been able to do,” Robinson said. “College is an expensive and very significant sacrifice. We always keep in mind affordability and access for all.”