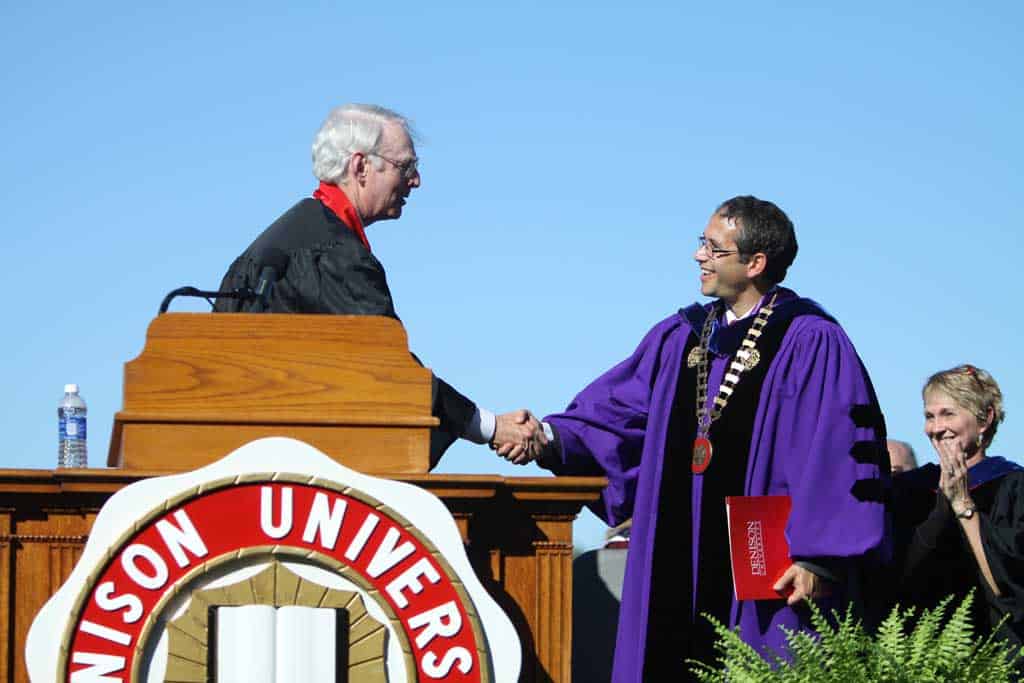 Remember when you were inducted to Denison as a freshman? Multiply that by ten and you’ll get a sense of what President Adam Weinberg’s induction ceremony was like.

On Friday, Oct. 11, over 1,500 members of Denison community came together behind Slayter Union to welcome Adam Weinberg as Denison’s 20th president.

Similarly to the first-year induction, a brass quintet opened the ceremony, playing “Fanfare to La Peri” as the faculty marched in wearing full academic regalia.

The student body gathered on the academic quad at 2 p.m. wearing red and assembled on two sides of the procession.

All of the speakers welcomed President Weinberg with open arms and offered him words of wisdom.

Provost Kim Coplin called President Weinberg a “leader with vision and courage” and welcomed him as well as his family to the college.

Student body president Ana Morales, a senior from Lawrence, Mass., told President Weinberg that “we are a varied and interesting bunch, and we look forward to shared experiences.” She ended her speech by giving back President Weinberg’s own words of advice to the Class of 2017 from their induction ceremony.

“Ask questions. Be creative. Take risks. Show courage. Respect others. Follow your heart. Manage your time. Take care of yourself. Maintain your integrity. And please enjoy this.”

On behalf of the faculty, Catherine Dollard, chair of the faculty, explained how “this is a faculty that likes to talk.” She asked President Weinberg to help facilitate such productive conversations.

“We welcome you to lead us in our talking, in our conversations with and about our students, our intellectual work, and our community. And we ask you to facilitate moving such conversations into action,” said Dollard.

“It’s the only time it’s going to be happening during my four years here and for probably 25 years.” Vincent was both curious and eager to witness such a “historic moment.”

When President Weinberg took the podium to give his first official speech as Denison’s twentieth president, the audience greeted him with a standing ovation.

President Weinberg returned the favor by asking the audience to give the student body their own round of applause. His speech focused on the power and opportunity that students have at Denison.

“Our students remind us of the power of the liberal arts through the lives they lead. They demonstrate how the liberal arts not only free us to become the person we want to be but they allow us to be a much better person than we otherwise might have been.”

He talked of his own experience at Bowdoin College, where he played ice hockey and was challenged inside and outside of the classroom.

“I can speak from personal experience. I know the profound effect the liberal arts can have on a person,” he said.

He joked that Bowdoin only admitted him because he was a “pretty good ice hockey player” and “could handle the course work.”

“By the end of four years, I had become an accomplished student and ready to take on the world,” he said.

Weinberg ended with a joke, on behalf of his grandfather who once said, “the best speakers, get up, tell a joke, and sit down.”

Casey Chroust, the representative from the alumni, did just that when he gave President Weinberg some practical advice. “Watch out for the deer. They are everywhere,” said Chroust.

If you missed the ceremony, you can watch it at www.denison.edu