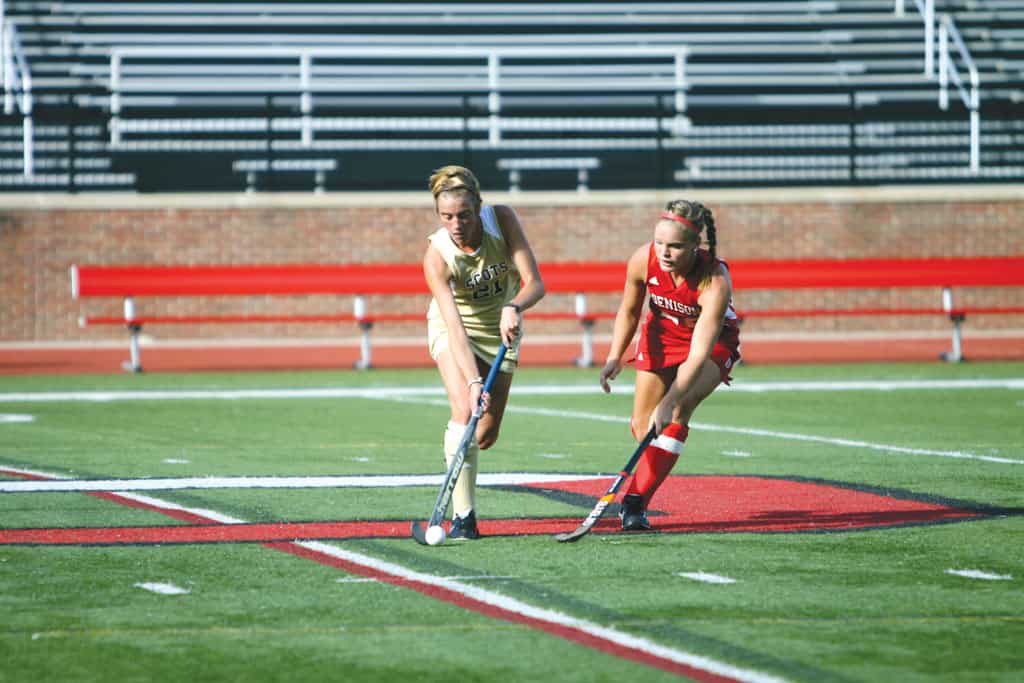 Coming off of a 2-1 victory against Ohio Wesleyan on Saturday October 5, the Denison Big Red field hockey team was looking forward to their next three games, all at home, versus Wittenberg, Earlham, and their archrival DePauw.

The first game, held this past Tuesday, was against the Wittenberg Tigers. The Big Red would shut out the Tigers 3-0, with senior star Katie McMahon scoring twice and senior Alex Berman scoring the third. The defense was a force to be reckoned with, not allowing a single goal attempt from the opposition the entire game.

McMahon was coming off two consecutive North Coast Athletic Conference Player of the Week awards and continues to post some impressive numbers on the stat sheet so far this season. After the Wittenberg game, the senior had 10 goals and 6 assists.

“It’s really exciting,” McMahon said. “At the beginning of the season, point-wise I started out a little slow, so it’s always exciting to get back into it. It’s fun to be scoring. It feels good to be driving the team. There is still always room to improve however.”

“I thought as a team we played well, obviously,” McMahon continued. “After every performance there’s always things to look back and improve upon. Overall, I think we played a good game, showed them, and came out strong.”

Looking ahead to the first of two weekend games against the Earlham Quakers, McMahon wasn’t too aware of the losing record of the Quakers as she was more focused on bettering the team, dotting every “i” and crossing every “t.”

“Well, right now we’re not trying to overlook Earlham,” McMahon said earlier this past week. “It’s just as important as every other game. We want to come out as strong as ever, really work as a team and keep improving each game we come out. We’re looking to play our best and hopefully come out with two wins this weekend.”

The Big Red went on to demolish the Quakers 7-0, with four goals scored in the first four minutes of the second half. The goals were scored by senior Alex Berman (3), senior Karla Dixon (1), senior Mia Day, sophomore Elsie Humes (1), and Katie McMahon (1).  The team played impressively and once again did not allow a single goal attempt by the Quakers, making senior goalie Laura Campbell’s life a lot easier.

The biggest match of the three home game stretch was against archrival DePauw University. The DePauw Tigers had not lost a game yet and they lead the NCAC, followed by Denison.

And while the Big Red may have faltered last time they faced DePauw, losing 2-0 away, they weren’t ready to let it happen again.

A lot was at stake for the DePauw game with conference standings on the line and giving the seniors one last chance to beat their archrival. McMahon was looking forward to the team’s big test.

“I’m personally very excited for it. I love playing against them, even though they’re our biggest rivals,” said McMahon. “For us, it’s almost like a different mindset. We have this fire in us where we just want to come out and destroy them.

“In our last game against them, we didn’t play our best game,” she continued. “So, we are hoping to come out and show them that we are lot more than what we showed them the first time.”

And they did just that. Denison blanked DePauw 2-0 at home on Sunday. The first half of the game was scoreless with both teams playing excellent team defense. With the proper halftime adjustments, the Big Red were able to effectively move the ball down field and score two goals by senior Mia Day and junior Molly Chapman.

This vital victory against Depauw puts Denison in a tie for first place in the NCAC and secures a spot for the postseason. This is a huge victory in terms of conference standing and team morale.

Looking ahead, the Big Red will take a break from conference play when they head to St. Charles, MO to play Lindenwood University at 6:30 p.m. on Friday, Oct. 18.