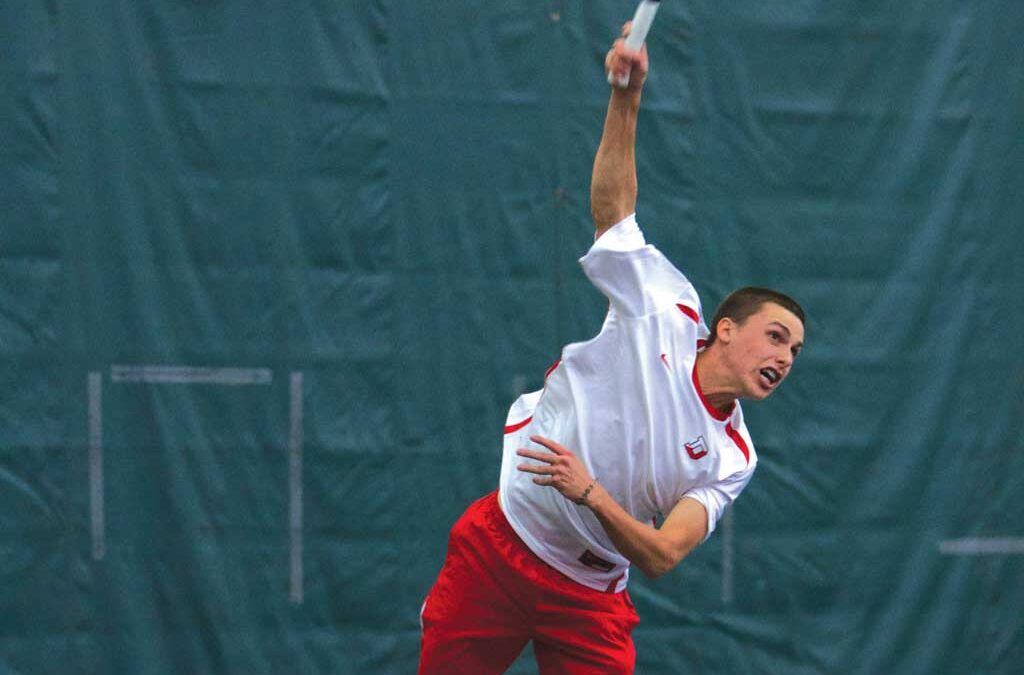 The Big Red men’s tennis team wrapped up its fall season at the USTA/ITA Central Region Championships last weekend in Kalamazoo, Mich.
Unlike the team’s dual matches against rival colleges that take place in the spring, the ITA tournament is an individual competition with no team scoring.
Yet, the tournament does serve as a useful barometer in assessing the team’s talent and potential for the upcoming spring season.
Junior co-captain Grant Veltman (pictured) described his two hopes for the fall season as “coming away with results to be proud of” and finding “knowledge of our weaknesses.”
One nice result came from senior co-captain Andrew Marczak, who won four matches en route to a semifinal showing in the backdraw.
“I think it’s always a great win when a team has a leader play well. It can inspire some of the younger players on the team,” said Veltman. New faces for the Big Red this year are Owen Smith, Ryan Bibo, and Ben Short.
Perhaps drawing inspiration from Marczak, Smith easily dispatched a notoriously fierce competitor in his first round of the main draw. After a first round loss in the B draw, Bibo found his game and won the backdraw of the B singles.
Recently, the Denison men’s tennis team has been known for its strong doubles play. This was seen when the Big Red fielding two seeded teams in the doubles main draw.
Veltman and fellow junior Shankar Rajupet entered as the fifth seed, and lived up to that billing by advancing to the quarterfinal round.
Senior Juan Guerra paired with junior doubles aficionado Jeffrey LoDuca as the fifteenth seed, but they were mired in what Veltman called “definitely the most competitive portion of the bracket.” The duo battled v two tough victories before falling to a talented third-seeded team.
Veltman was satisfied with the team’s performance and happy that the team had accomplished both of its goals of posting good results and identifying weaknesses to improve for the spring season.
This year, the Big Red have presented themselves with a more challenging schedule featuring a spring break trip to California.
But with the leadership of elders like Marczak, Guerra and Veltman and an infusion of young talent, the team hopes to take advantage of all possible advantages possible.
And after a promising start like this, the Denison Men’s Tennis team may just be on a path to excellence.