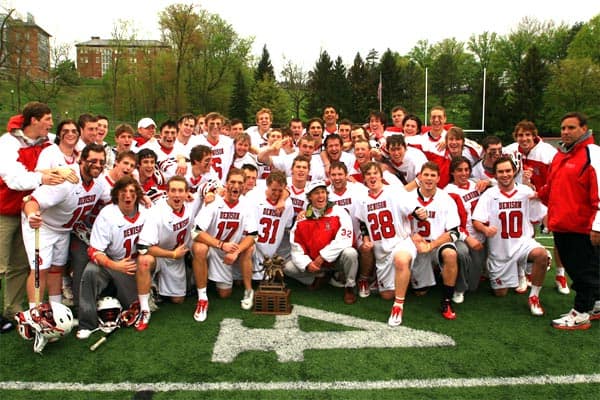 Lacrosse Magazine has ranked the Big Red men’s squad 15th in the nation in its “Midsummer Night’s Power Rankings.”

“I think that it is always good to be ranked, but we expect to win the conference this year and be playing for a national championship. 15 is nice, but we want to be number one at the end of the season,” said sophomore James Kerr.

Denison finished 13th in this magazine’s year-end rankings in May. Although the team posted an impressive 13-3 record last season, the Big Red have their sights set on an NCAA Tournament berth this year after being left out last year.

In last year’s NCAC Championship, Denison dropped a 10-9 final to rival Ohio Wesleyan, missing out on the title by the narrowest of margins. The loss also snapped the Big Red’s streak of eight consecutive NCAA appearances and handed the Battling Bishops their first NCAC title in program history.

“We lost to our biggest rivals, OWU. We did not have our best game, and they played very well. We want to avenge that loss this season,” said Kerr.

With last year’s bitter ending fresh in their minds, the Big Red will not be short on motivation this season. The squad returns eight starters, including its top six scorers from last year. As always for the Big Red, however, the team will need to take care of business in the conference tournament to secure an automatic bid to the NCAA tournament. Standing in their way will likely be a familiar OWU team, which should provide the perfect opportunity to exact revenge.

“We have very high hopes for the season. We had a strong fall and we are getting better all of the time. We hope to go undefeated this year and play for a championship,” added Kerr.