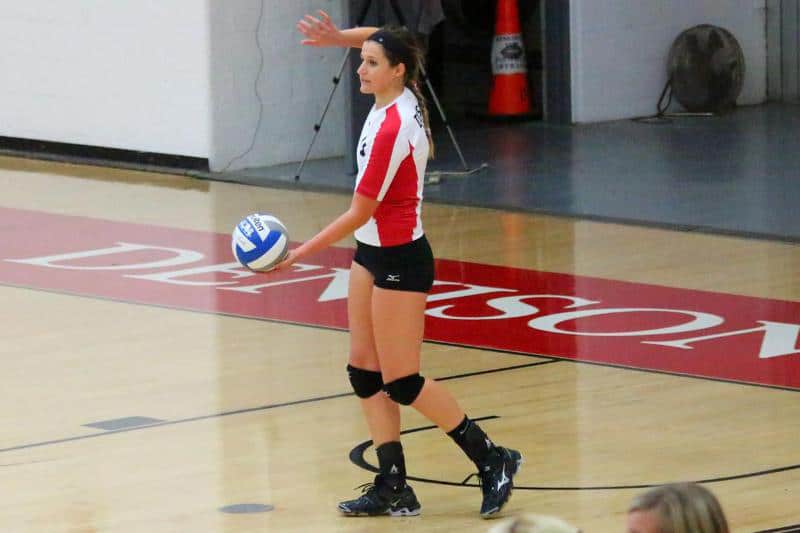 With one last serve before the end of a crucial conference game, Denison sophomore Kelsey Kuhn put the ball up against archrival Kenyon. After an intense rally, Denison won the match off of an unforced error by Kenyon, giving the Big Red a 3-0 victory.

Prior to Saturday’s game against Kenyon, the Denison Big Red volleyball team was coming off of a tough loss to Oberlin last Wednesday. This loss ended a 6-game winning streak. Sophomore Annemarie Fischer stressed the importance of moving on from this loss and preparing for Kenyon.

“It was a tough loss to bear, but we are using it as a time to refocus for our upcoming conference matches,” said Fischer.

The Big Red had two days to rigorously prepare for their matchup against Kenyon. The team watched a lot of film on themselves and the opposition to prepare for the game.

“During these two days of practice before the Kenyon match, we discussed the strategies to bring into the match and watch film of ourselves from past games, and we also watch film of Kenyon to recognize their tendencies on the court,” added Fischer. “From our knowledge from watching film, we practice drills that will prepare us for the match.”

And while Kenyon is one of the worst teams in the NCAC, Denison was not ready to overlook them. DU needed to stick to the game plan and to stay calm if things got out of hand.

“To seal the win this weekend, we must keep the momentum on our side and remain calm if the play gets chaotic,” Fischer said.

With playoff implications on the line and conference play ending next week, the Big Red was fully aware that this game was a must-win. It wasn’t out of the realm of possibility for Kenyon to play the role of a villain against the Big Red.

“Yes, this game has postseason playoff implications attached to it. This win is a determinant of our seed in the NCAC tournament. Right now we are third in the conference and plan to move up,” said Fischer.

And when tip-off came, the Denison Big Red delivered in a dominant win against the Kenyon Lords. Denison’s frontline physically outmatched Kenyon’s frontline. Sophomores Kenzie Kuhn (6’0”) and Elena Lein (6’1”) played exemplary defense against the opposition. Kuhn had 10 diggs and Lein had 5 solo blocks.

The dominance on both offense and defense is a big reason why Denison won this game so convincingly. The team triumphed on each set by 10 or more points, making this game a one-sided affair. And Kenyon, failing to win even one set, lost to Denison 3-0.

With this big win the Denison Big Red move to 2nd place in the NCAC and the seniors win their last home game.

Their next game is at Wittenburg, on Wednesday, 7 p.m.