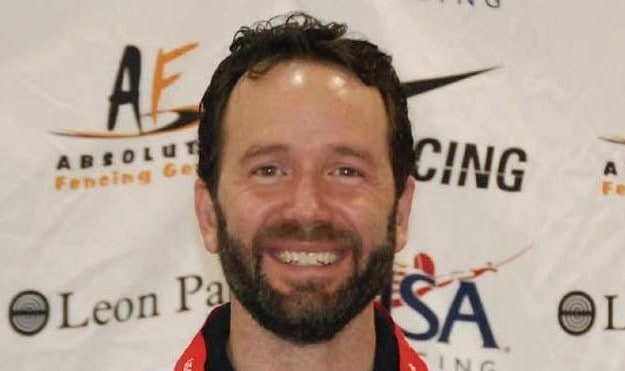 Grandbois was born on April 3, 1964 in Minneapolis, Minn. and grew up in Colorado. Though neither of his parents attended college, they were successful entrepreneurs and formed their own temporary staffing business. This left the 9-year-old Peter as “one of the latchkey kids,” staying at home with his 7-year-old brother, Dan, and 6-year-old sister, Julie. “We were free all day long, so we ran around in the fields of Denver and caught lizards and bugs and snakes.”

After attending Overland High School in Aurora, Colo., Grandbois earned a Bachelor of Arts in biology and English and a Master’s in English literature from the University of Colorado in Denver. In 1991, he took a 10-year hiatus from school and began fencing for the U.S. national team.

Ten or 20 of the best fencers in the nation, including Grandbois, lived and trained together in San Francisco, Calif. “You train with the same people you’re competing against, so there’s this weird balance between hating each other and loving each other, kind of like a marriage,” Grandbois said. And like a marriage, the small team had conflicts: “Every night you’d fence, and every night fights broke out, actual fights with people yelling at each other, sometimes trying to hit each other, because it was so intense. But then you’d go and be a team together, too, and get along together.”

Grandbois fenced on the five-member team for two years, in 1993 and ’94. It gave him his first opportunity to travel abroad. This kindled an interest in international culture and literature, which would remain with him. While on the team, he worked making swords for the American Fencers company, though he later quit because he was inhaling too many metal shavings. His frequent travel strained his relationship with his wife, and the two were divorced. Grandbois decided then to stop fencing competitively, and worked variously as a clerk at the Stanford Cancer Center, at a bookstore, running his parents’ business, and as a high-school teacher.

A return to academia

While teaching, an unsatisfied intellectual drive and desire for more writing time convinced him to return to graduate school. He earned his Master of Fine Arts at Bennington College in Vermont and his doctorate from the University of Denver, both in creative writing. From there, Grandbois taught at Sacramento State University in California for four years. The learning environment was stifled by the reduced funding, and he joined the stream of faculty leaving the school “like a sinking ship.”

Since 2004, he has worked as an assistant professor of English here at Denison. He was drawn to Granville by the atmosphere, the area, and the senior writing project, a book-length work in any genre that every creative writing major must complete during their senior year. Grandbois describes mentoring this project as “a delicate balance. You want to push the students, but you don’t want to crush them.” He also teaches an introductory creative writing class and a seminar in creative nonfiction. Professor Margot Singer, Chair of Creative Writing and herself an acclaimed author, says that Grandbois’ teaching style is innovative. “He is always thinking about how students learn and coming up with new teaching approaches to meet their needs.”

Grandbois expects the same things from his students that he looks for in his own writing. “I want complex characters dealing with real emotions, and I also want the language that is original and fresh and doing as much work as the plot and the characters are in terms of creating story.”

Instead of bestsellers from major publishing houses, Grandbois prefers reading international writing and fantasy. “There are many great books that are overlooked that we don’t consider classics, and I tend to champion those. A lot of critics think it has to be realistic to be great, and that’s where I’m different.”

Singer describes his writing style as “magical realism and forms of ‘irreal fiction’ that break the conventions of literary form,” and says Grandbois is “very knowledgeable about the writing world at large.”

His own work is an example of this. He has published in every genre except poetry, including two novels, Gravedigger and Nahoonkara, a hybrid memoir, The Arsenic Lobster, and a collection of short fiction, Domestic Disturbances, all through different small presses. When asked what the process of using different publishers was like, he immediately replied, “It’s horrible,” but laughed. He goes through the process of building a new audience with each book, but sees this as progress. “It’s a sign that each of my books is radically different. I’m not writing the same thing over and over again.” He is now submitting two other novels for publication, a collection of novellas called Wait Your Turn and a novel set in Minnesota about the Ojibwa people, entitled X.

Several of his plays have been produced, and one will be released in the prestigious Kenyon Review next summer. He has adapted his novel Gravedigger for the screen, which has been translated into Spanish and is in production in Mexico. He is also working with his brother Dan on editing an international multi-genre anthology for the Texas Technological University Press. Dan has published three books of his own prose poetry, and lives in Colorado when not on tour with his band, Slim Cessna’s Auto Club. Their sister Julie remains in Boulder, Colo. and manages the family business.

Peter lives with his second wife and three children in Granville and spends his time transporting his children to their many extracurricular activities and coaching the Denison Fencing Club. This allows him to interact with students outside the classroom. “I get to stab them, and they get to stab me,” he said, laughing. “But I don’t let them hit me too often.”

Isabel Randolph ‘16, an English major from Columbus, Ohio, has been involved in the fencing club throughout her undergraduate career and has taken Grandbois’ “Introduction to Creative Writing” class. “In both fencing and creative writing he’s incredibly talented, but he’s also very humble,” she said. “He took almost two decades off from fencing, and he’s still really good, which can be pretty intimidating.”

Grandbois took the fencing club to a tournament last year, and hopes to bring the club to more. But he has other ideas he hopes to pursue after he completes the time-consuming tenure process, including a piracy certificate earned by taking courses in fencing, swimming, running, and either archery or sailing, and a small press which could publish two books each year. These would be in addition to his numerous extra activities on campus, including serving as an organizer for the Beck Lecture Series, which brings nationally renowned writers to lecture on campus. As an advisor for Exile, Denison’s literary magazine, he is responsible for supervising the digitizing  of the magazine, including archivization of older issues. But this student magazine is only one of his critical credentials; he is also an editor for literary magazines Boulevard, Narrative, and post-genre Mixer.

The unifying principle throughout Grandbois’ various jobs has been personal discipline. “Sport and writing have a lot in common,” he said. “Talent is a dime a dozen for athletes and for artists. What isn’t is discipline and dedication.” Through teaching and coaching, he encourages students to adopt these practices. “My goal is to always push [writing] to be the best it can be, not to be satisfied with the first words that come into your head and the first ideas that come into your head, but to push it to be better. That’s it.”