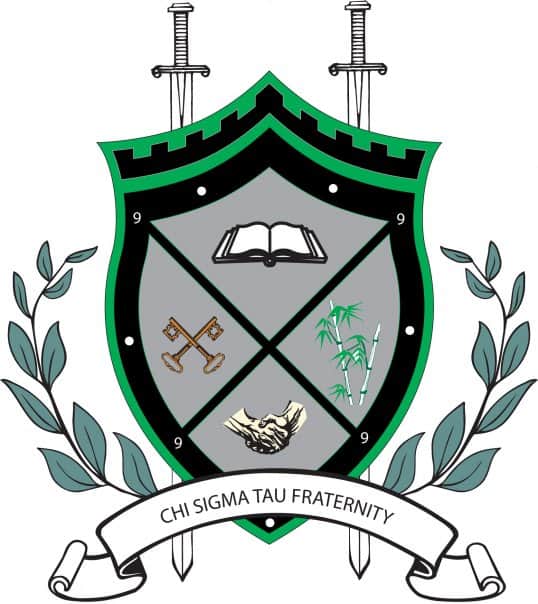 Last Friday night in Herrick Hall, history was made on Denison’s campus. Eight students marched onto the stage in Herrick Hall clad in black pants, black button down shirts, green ties and white masks concealing the identity of each pioneer of Chi Sigma Tau, the newest fraternity on campus.

Chi Sigma Tau is the oldest Asian-interest fraternity in the Midwest region. It was founded in 1999. Its philanthropy is the Alzheimer’s Foundation, and it also does charity work with the Wounded Warriors Foundation, which caters to veterans.

The idea to bring this fraternity to campus started with junior Kevin Dao, president and co-founder of Chi Sigma, when he began exploring Greek life on Denison’s campus. He said that he could not find an organization that matched what he wanted to do.

“Denison is always encouraging us to start new organizations,” he said.

Because he could not find an organization that matched exactly what he wanted—an organization focused primarily on community service values rather than social engagements—he decided to start a new fraternity. “I just took the idea and ran with it,” he said.

In order to legitimize the organization on campus, Dao said he first had to find people who were interested in joining the fraternity, and he then had to talk to multiple school and organizations, such as DCGA and the Multicultural Greek Council on campus.

Although Chi Sigma Tau was founded at the University of Illinois, the Chi Sigma Taus here are affiliated with a chapter at Northern Illinois University. Dao said that he and his brothers chose this specific fraternity for different reasons, but he chose it because he “could physically see the eternal brotherhood they had, and this is something [he] wanted to be involved with.”

Before last week, most people on campus were not aware that there was going to be a new fraternity on campus, let alone who would be in it. Sophomore Ben Hsuing, historian of the fraternity and one of the first members of the chapter, said they “wanted it to be a major secret, but [he’s] proud to finally be able to tell people about it.”

Dao and Hsuing both hope to see the Chi Sigs collaborate with other organizations on campus, both Greek-lettered and non-Greek-lettered. “One of our major goals on campus,” said Dao, “is to be a catalyst for long-lasting change on campus. We want to break boundaries and cross lines for a more unified campus.”

Hsuing agreed. He said, “We want to make the campus aware of who we are but also collaborate with other organizations on campus.”

Students on campus are excited to have another multicultural fraternity on campus. Junior Daisy Ochoa, member of Sigma Lambda Gamma, said, “it’s really cool to have them on campus because it shows cultural diversity and shows that the leadership on campus is continuing to grow.”

Greek-lettered and non-Greek-lettered students alike have expressed their approval for a new fraternity on campus that is community service based and different from the norm.

The plans are in the making: New theater arts building?