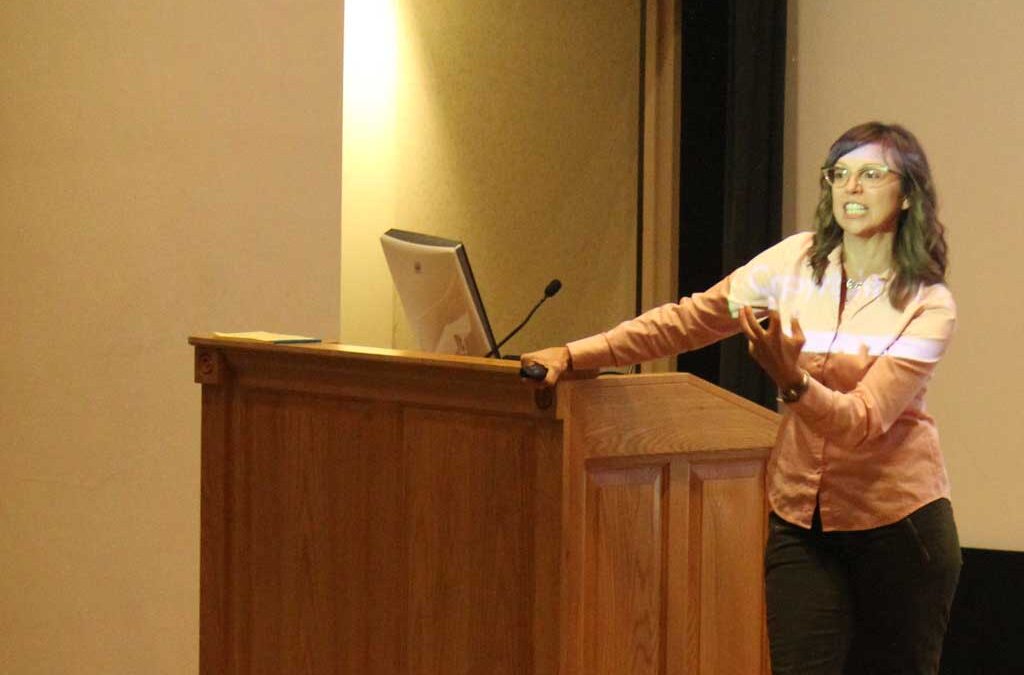 Amber Kelly, host of the August orientation program “Sex Signals” in prior years, brought “Beat the Blame Game” to campus this week. This is a program exposing the effects of victim blaming in sexual assaults. Senior sociology and anthropology major Lisa Huffman, president of Sexual Harassment and Rape Education (S.H.A.R.E.), said, “I think there is a really big problem with victim blaming on this campus, and this is getting it out to the public.”

Before professionally giving informational public talks about issues in sex or relationships, Kelly was a theatre major. Sharing the same skills as her mother, Kelly decided to join her mother and go into informational speaking.

Kelly said, “I sort of felt responsible for sharing the information.” Kelly entertained and informed, and she also felt the audience received the message well. She said, “I thought it was a great crowd that seemed really active, participating in the conversation.”

The event was held on Nov. 12 at 7 p.m. in Slayter Auditorium and was sponsored by S.H.A.R.E. Advocates, CSMART, Residential Education, and the Office of Security. Kelly opened her talk by reading a televised response to an 18-year-old suburban girl being raped and murdered.

After reading the tone and context of the narrator, Bill O’Reilly, Kelly asked the audience to express which person in the scenario was considered to be at fault. The entire audience of men and women answered in unison that the victim was being blamed for not being properly dressed or in the right neighborhood, factors not worthy of blame like the perpetrator.

Cara Decaro, a junior S.H.A.R.E. advocate and sociology and anthropology and international studies double major, felt that many people who attended would find the talk useful, because not everyone at the event may have gone through or witnessed victim blaming. She believed the program gave the audience the tools to know what to do if they witness these occurrences.

Kelly covered name calling, another factor of victim blaming, by asking the crowd to name some words used to categorize men and women who frequently have sex. Women produced more negative names, like “slut,” “whore,” “harlot,” “doorknob,” “ratchet,” and “loose.” Men had only a few like “pimp,” “bro,” “player,” or “the man.”

Is there a way to stop victim blaming? Yes, according to Kelly: it is consent, and it begins with knowing that women and men are at risk of sexual injustice. As Kelly expressed in conclusion to the talk, “asking permission gives the other person a chance to say no,” but it is better to possibly be rejected than to hurt someone.

Gail Stern, the founder of Catharsis Productions, said, “Consent is active, in the moment, can be withdrawn at any time, is not coercion, and it is the absence of struggling or stop.” As long as consent is present between both partners, no harm can be done. Consent is the first step to stopping victim blaming.