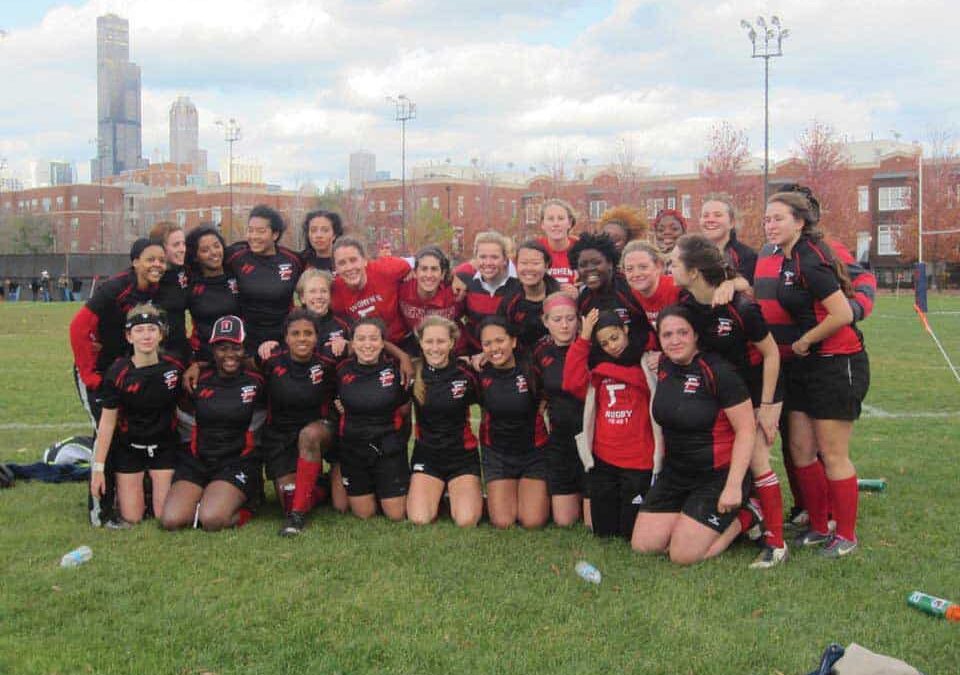 It is not a common occurrence for a Denison club team to be in the national spotlight. This is not the case, however, for the women’s rugby team. Defending Division II Ohio champions, the Big Red has consistently shown that it is the local team to beat. The success of last year’s season ended with a trip to the Elite 8 of the National Championships. The women made it their goal this year to get to that same spot, and potentially go even further in the tournament.

This year, the level of play and determination was nothing short of extraordinary. The women went undefeated in the regular season, with a key win against Ohio rival Kenyon College. Once again, the Big Red were invited to participate in the National Championship.

Thanks to its undefeated record, Denison was granted the opportunity to host the Sweet 16 and Elite 8 rounds of the tournament this past weekend, an chance which the Big Red was honored to have. “Denison [is] officially on the map for national collegiate rugby,” explained junior captain Jackie Tran. “It was an honor to showcase our school and our field to these teams. Most of the teams, if not all, are actual varsity programs at their respective schools, but it showed that we were up to their level.”

Senior superstar Skarlyn Rodriguez agrees wholeheartedly with Tran. “When I found out that we were selected to host nations, I was ecstatic and excited that we were able to play our game in our home pitch,” she explained. “Not only that but I think hosting nations is great exposure for the team.” In a hard fought battle, the Ithaca College Bombers narrowly edged out Denison, winning 29-25. Though the women were disappointed they were not able to progress further in the tournament, they are pleased with the overall success this year. “Even after this weekend I still think we had an amazing season,” explained newcomer and senior Hannah Schwartz. “We played incredible, had a great season and are undefeated DII Ohio State Champions and no one can ever take that away from us.”

Tran agrees completely and is especially proud considering the women are playing with a relatively new squad. “After losing 10 starters, our team was able to have an undefeated season up until this weekend.” The team does not harp on this statistic, however. Instead, as Coach Garrett Fisher likes to say, the team isn’t rebuilding, they are simply reloading.

Still, losing such a large number of starters was a bit of a concern throughout the season, especially when returning to the national tournament. “Hearing how amazing the seniors from last year were, I was a little nervous,” Schwartz said, “but after our first game I was no longer worried. I know when I step on to the field that I can count on the fourteen other players to have my back.” Regardless of the team’s first, and ultimately season-ending loss this Saturday, the game was as intense and physically demanding as all other games. “I would have to say that everyone who played this weekend did an amazing job,” explained Rodriguez. A number of girls really stood up to the occasion and helped make the match as close as it was. A number of team members praised the efforts of sophomore Keylee Jones. “[She] killed it this weekend,” Rodriguez noted. “She’s such a brick, when she gets the ball there is no stopping her.” Tran agrees completely, explaining that she “was probably the star this past weekend.”

This being her first semester on the team, Tran was even more impressed with her intensity and overall passion for the game. “She picked up the game right away,” Tran continued, “and her aggression helped the team this weekend.”

Boutin added that the more experienced members of the team are consistently top notch. “Skarlyn Rodriguez and Jackie Tran were strong leaders in the back line, both offensively and defensively,” she explained. “Jackie did a good job of moving the ball while Skarlyn was a fast runner with the ball.”

Moving forward, the team recognizes that there are a number of things which they can improve upon to increase their effectiveness as a cohesive unit. “I think one thing we could focus on is mastering the basics and fundamentals of the game,” Tran noted. “Most of the time, the [opposing] team had the advantage because of our team’s small mistakes – missed tackles, not launching up, failure to set the ball firmly, and so forth.” Rodriguez agrees with Tran, adding that as a team they “need to work on our defense and launching up along with our tackling. That is what killed us in our first game verse Ithaca College Saturday morning.”

For the seniors, the ending of the fall season it bittersweet. “It meant a lot to us to have fans there to share our love and passion for this sport” Rodriguez said. She also highlighted the importance of the women’s coaching staff in helping them reach this continued level of success “The team would not be what it is without their amazing coaching skills, patience, and family mentality which we have built our program around.”

Schwartz recognized the impact this fall will have on her college memories. “As a senior who just joined the team I wish I had known about it earlier on in my college career we have amazing coaches and we are always there for each other. We truly are a family on and off of the field.” Though this weekend was not the outcome the team had hoped for, they are more than excited for the spring when they resume play. “ Hopefully we’ll have the same players come back in the Spring and we also welcome anyone who is interested in playing to come check out a practice,” Rodrigues explained. Tran highlighted the importance of the spring season, which is mainly tournament based and “dedicated to rookies to develop their skills.” Most recruiting happens during the spring time and the team utilizes the nice weather to help new players gain experience on the field.

Though it is still quite some time away, the team is already looking towards making a comeback at nationals next fall. “Our team hopes that next year, we can continue to host the nationals and continue into the final 4,” Tran concluded.

Based on their success these past couple years, this goal is not only attainable but more than likely.

*Our print edition should have been titled “ranks 13 in nation,” not 9 in nation.