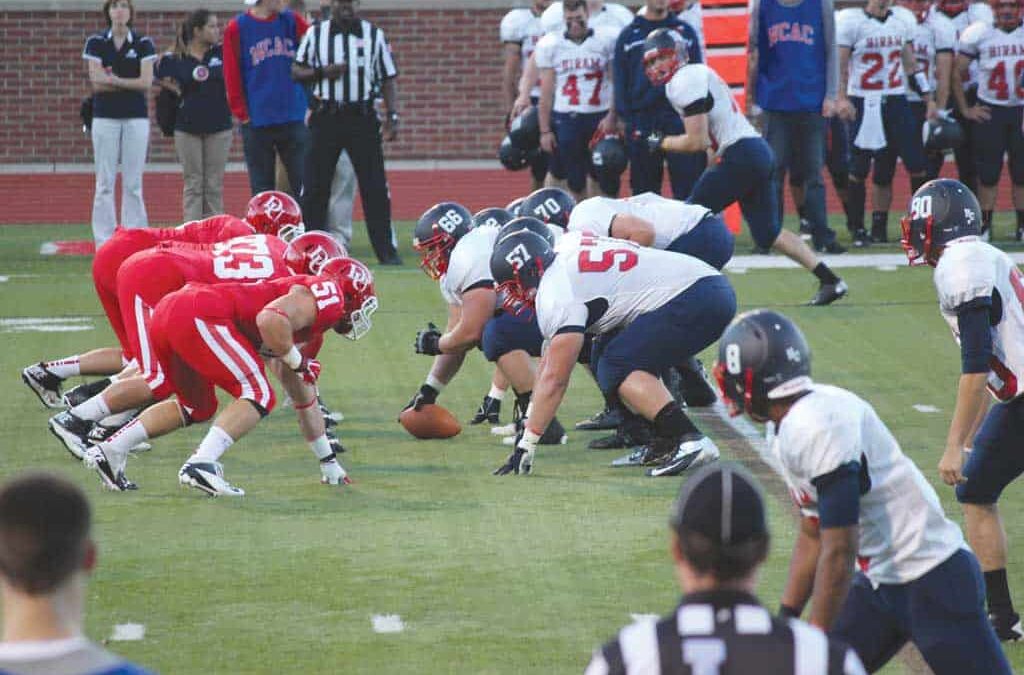 The Big Red football team finished off a historic season with a 42-7 win against North Coast Athletic Conference rival, Kenyon College, on Nov. 16 at Piper Stadium.

Denison ended the season with a 7-3 record, good enough for fourth place in the final NCAC rankings. The victory also marked the team’s most wins in a single season since the memorable 1986 squad went 9-1.

The 2013 squad overcame one of the conference’s top defenses, led by Kenyon senior linebacker Kolin Sullivan. Sullivan led all of NCAA Division III in tackles for a loss, averaging 2.9 per game. He was also ranked third in the nation in sacks.

“We were [nervous coming into this game],” DU head coach Jack Hatem said. “[Kenyon’s] a really good team. [Sullivan] on their defense is one of the best players in the country, and we played well today.”

Denison’s offense set the tone in the first quarter when junior Colin Morris rushed for 48 yards on the Big Red’s fourth play to score the first touchdown of the game. Junior Matt Puracchio’s kick attempt was good, putting the score at 7-0.

The Big Red’s defense held Kenyon to a six-play drive that allowed the Kenyon offense just 13 yards. Kenyon’s Antonio Cataldo then punted the ball to Denison’s 25-yard line. Morris fumbled the ball at the 25-yard line, but sophomore cornerback Lucas Romick’s recovery earned the Big Red three yards. Junior quarterback Brandon Sklenar rushed for 32 yards on the first down and then completed a 17-yard pass to senior halfback John Wilson, which landed them at Kenyon’s 11-yard line. On 2nd and 8, Sklenar completed another pass to Wilson for a nine-yard touchdown pass. The first quarter ended with the Big Red leading 14-0.

Kenyon responded with its only scoring drive of the game in the second quarter. Kenyon fullback Blake Calcei completed Kenyon’s 16-play, 69-yard drive with a one-yard touchdown run.

Denison struggled for the majority of the second quarter before a Kenyon three-and-out followed by a 27-yard punt to Kenyon’s 45-yard allowed the Big Red to start its eight-play scoring drive with just 4:46 remaining in the second quarter. An 11-yard pass from Sklenar to Morris launched the team into gear. Sklenar then completed a 26-yard pass to sophomore wide receiver DuShawn Brown, who was subsequently tackled on the Lords’ four-yard line. Wilson was stopped just short of the Lords’ goal line with a three-yard run. Sklenar passed to senior fullback Jack Varanese for one yard for a touchdown. Denison led 21-7 at halftime.

The Big Red played the last half of the game just as strong as the first half. The Big Red scored in just three plays in the first two minutes of the third quarter. Sklenar completed a 29-yard touchdown pass  to Wilson on Denison’s first drive. Puracchio’s extra point attempt was good, giving the Big Red a comfortable 28-7 lead.

The Big Red scored again with just under eight minutes remaining in the third quarter. Sklenar passed to DuShawn Brown for 10 yards to Denison’s 47-yard line. At 2nd and 10, Sklenar passed to Wilson for 13 yards.

Sklenar completed another 13-yard pass, this time to Morris, putting the Big Red at Kenyon’s 23-yard line on the Big Red’s first down. Sklenar passed to Brown for nine yards to the Kenyon 14-yard line. With 7:39 remaining in the quarter, Morris finally broke away for the touchdown, putting the score at 35-7.

Brandon Sklenar rushed for 39 yards at the start of the fourth quarter. He then completed a 12-yard scoring pass to Morris. With the score at 42-7, Denison secured the win.

The defense played a tough game, with senior Joel Elliott leading the defense with 10 tackles, one half sack and one fumble recovery in his final game.

“The offense didn’t really need to do much. The defense held [Kenyon] to seven points. [Kenyon] only giving up seven points made it pretty easy on us,” Wilson said.

Sklenar totaled 2,895 yards for the season, giving him the third-highest single season total in school history. Sklenar led the team in passing and rushing this season.

“[I’ve been] doing the little things the best that I can and to the best of my ability,” Sklenar said. “I’ve been able to come into practice, really be technically sound, go through my reads, learn the progressions and just master the offense.”

Additionally, the Denison offense had 223 first downs throughout the season, tying the single-season record set by the 1985 team.

The Big Red will lose 14 seniors. Elliott will leave Denison with 173 career tackles. Wilson finished with 81 receiving yards off of five catches and 37 rushing yards, totaling 1,370 yards in his last season at Denison.

Wilson cited his best memory at Denison as the team’s Sept. 28 47-41 double overtime win at Ohio Wesleyan University. “I’d lie if I didn’t say the win against OWU in double overtime wasn’t up there.  That’s definitely one of the best things I’ll remember,” Wilson said.

Many of the seniors attributed the team’s success this season to the coaching staff’s efforts over their four years at Denison.

“It’s awesome because the record really reflects what the senior class has put in and that the coaching staff has put in. It starts with the coaching staff,” Wilson said. “Coach Hatem hired the right guys who really laid down the law for us as players and ourselves. It was a total change of the whole program, and you obviously see the results in a season like this.”

Elliott added, “We had a great win against OWU. That’s our big rivalry game. Being with this group of guys, they’re like family,” Elliott said. “[Our coachs are] always working so hard game-planning for us every week, and making sure we’re ready to go.”

The team was undefeated at home during the season, with all three losses coming from road games.

Sklenar agreed, adding that, “This is the field we practice on, we sweat on and we bond as a team on. And then to come out here and to not let anyone defeat us, that’s huge. I think we definitely earned that one and I think we’re going to carry this momentum into next year.”

Looking forward, the team will shift its focus to capitalizing on its successes from this season.

“We’re hungry for it, and although we’ll lose some key players, we still have a lot of talent coming back,” Sklenar said. “Some of our core players are going to make a big impact next year, and we’re going to shoot for the conference title.”