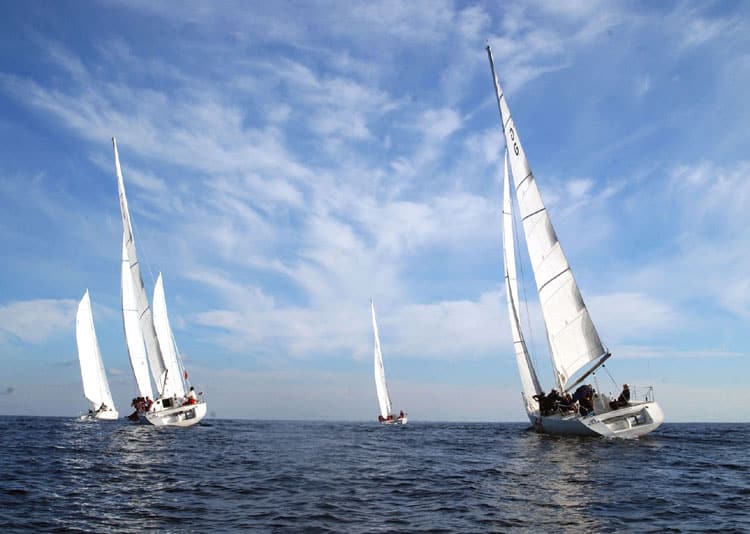 The club sailing team here at Denison University is a co-ed sport created with the purpose of advancement, encouragement, and improvement of sailboat racing and the sport of sailing in all its phases. Their goal is also to promote and develop the high ideals of the sport of sailing among the student body.

They are a part of the Midwest College sailing Association, the MCSA, where they compete against other schools in the Midwest including OSU, Wittenberg, Ohio University, University of Toledo, Miami University, and many more.

The team has two seasons throughout the year, one in the fall and one in the spring. “Our fall season is pretty incredible. Quite a few people come out, and we have regattas for five straight weekends or so in the fall. We travel to Miami, Michigan, and even the Great Lakes sometimes,” explained commodore Erin White.

The team’s notoriously favorite regatta is the IOR, held every year on the Long Island Sound in New York. During the IOR, the Storm Trysail Foundation, a charitable organization dedicated to supporting the education of young sailors, junior safety at sea, and intercollegiate big boat racing, lends collegiate teams their 37-foot yachts to race on the sound and to explore the city for the weekend.

Denison’s team is enthusiastic about sharing their love for sailing.

“We’re always looking for new people to come out,” White said. “We have some incredibly talented sailors, and we always want more to come out and join us.”

Experience is not required and the team is more than willing to teach any fellow Denisonian a thing or two regarding sailing. “You don’t have to know the first thing about boats to join,” White continued. “We have people on our team who took it up this September and people who are national level competitors. The skill level runs the gamut, and since a bunch of people on our team are sailing instructors, we’re pretty good at teaching and love to do so.”

DU’s team practices every Tuesday and Thursday, when the weather is favorable to still be on the water, at the Hoover Yacht Club in Westerville, OH. During the fall and spring seasons, the team usually conducts basic “regatta-style” practices where they periodically race OSU’s sailing team.

“We have two rules in regatta practice,” White exclaimed.

“One, don’t hit other boats. Two, OSU doesn’t win! They say the same about us, and it’s a friendly rivalry. The competition makes us better sailors, and at the end of the day, our teams get along.”

Team camaraderie is far from lacking. Support for new and old sailors comes with the love of being on the water.

“The team is my family,” White shared. “They are a crazy, enthusiastic bunch of people who love boats, a good time, and each other.”

Though the winter months are here, the team is always looking for new students interested in learning the art of sailing, especially in time for the spring season.