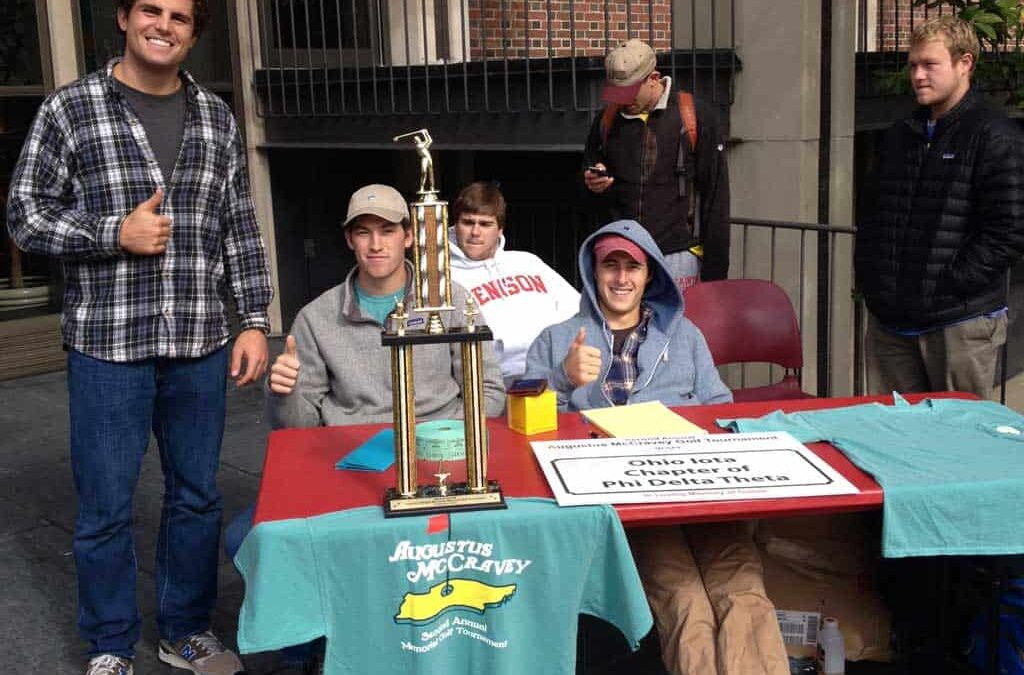 Each year the tournament is held in honor of former Denison student Augustus “Gus” McCravey, who died from an accident in summer 2011 while visiting friends in Spain.

At the time, he was studying abroad in Germany to improve his skills with the language and to immerse himself in the culture. He was a Communication major and a German minor at Denison.

As a result of his death, McCravey’s family established a scholarship fund at Denison in his honor.

For the past two years, his friends in the Phi Delta Theta fraternity have organized a memorial golf tournament in his honor.

The 2nd Annual Gus McCravey Tournament had a great turnout with members from the Phi Delta Theta fraternity, members from other fraternities, alumni, and other spectators from around the country.

The McCravey family was able to make the trip from Chattanooga, Tennessee to participate as well.

One of Gus’s friends and fellow Phi Delta Theta fraternity brother William “Neill” Peck was very pleased with the turnout of the event.

“The event was held on October 26th at Raccoon International Golf Course. We had 82 golfers in attendance and numerous other spectators,” Peck said. “About 30 alumni competed in the tournament. Members of other frats were also in attendance. It was played in a scramble format, which made for a very social atmosphere. It was a bit chilly and windy that day, but the weather didn’t detract from our spirits. We were able to raise about $3,500 through our efforts.”

Yet even after a successful turnout and fundraising by the Phi Delta Theta fraternity, there is still more work to be done to continue with the Gus McCravey scholarship fund.

This drive to continue the fundraising efforts stem from many personal relationships with Gus.

“Phi Delta Theta at Denison takes pride in raising funds for Gus’s scholarship fund. He was a great friend to so many of us, and it is a great cause. The scholarship is given to a student from the south who is interested in the arts. Phi Delt also stays in touch with the McCravey family and plans on continuing our annual golf fund raiser.” said Neill Peck.

Neill Peck, now a senior, knew Gus McCravey during his freshman year at Denison and as a member of the Phi Delta Theta fraternity. Neill knew Gus well enough to consider Gus a good friend and a mentor of his.

“Gus was a close friend of mine and my big brother in Phi Delt. He was a fun-loving guy who rarely didn’t have a smile on his face. He loved Denison and all his friends here. My fondest memory of Gus was a round of golf with him in April of my freshman year. It was a beautiful day, and we had a great time golfing. Unfortunately, that was one of the last times we spent time together before he passed.”

Gus McCravey appreciated the game of golf, which is the reason why his family and peers chose a memorial golf tournament in honor of his memory.

At the time of his death Gus McCravey was a rising senior and was very prepared for his senior year at Denison and beyond.