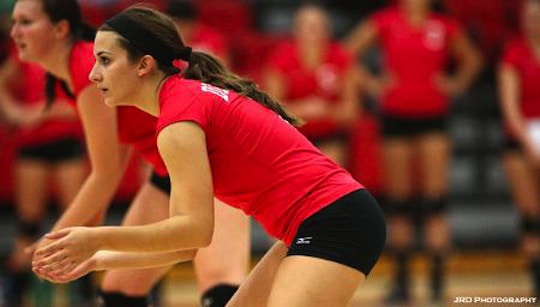 After finishing with a 6-2 record in league play, expectations were high for the third seeded Big Red volleyball team to make a deep run in the NCAC Tournament this past weekend, but the team came up short after dropping matches to No. 2 Hiram in the semifinals and DePauw in the third-place match.

The Big Red bested No. 5 Wooster 3-1 in the quarterfinal of the NCAC Tournament on Nov. 8 at Pam Evans Smith Arena in Springfield, Ohio.

A year ago, the women lost to the Fighting Scots in the opening round of the tournament.

With the win, the women earned a berth in the semifinal round of the playoffs and also improved their overall record to 20-7.

“Going into the tournament, we just wanted our play to reflect how much we have improved over the course of the season,” Gustafson said. “The Wooster game was sweet.

We started off poorly but fought back to win in 4 sets. It was redemption at its finest for our team after last year’s loss.”

The team faced No. 2 Hiram in the semifinals on Nov. 9. The women fell to the Terriers in a 3-1 decision.

Denison dropped the first set 20-25, but then opened the second set strong, eventually taking the set 25-22.

Denison trailed the entire way in the third set, which Hiram took in 20-25. Denison started the final set off with a seven-point deficit to Hiram (10-3). The Terriers’ attack percentage rose to .522 in the set and the Big Red could not respond.

Hiram won the set 25-16 to advance to the NCAC Championship against No. 1 seed, Wittenberg. Sophomore Elena Klein led DU with 11 kills and four block assists. Marguerite finished with 19 digs and Borsani had 22 assists.

“Both Hiram and DePauw are very disciplined and athletic teams,” Gustafson said.

“We put up a good fight in both of those games and took a set from Hiram, which has never happened since I’ve played at DU.”

After the loss against Hiram, DU faced DePauw in the tournament’s third-place match.

The Tigers avenged a regular season loss to the Big Red, defeating the team in straight sets (19-25, 25-22, 25-23). Sophomore Brittany Perry led the team with nine kills, and

Gustafson had eight kills. Marguerite had 21 digs. DU closed the season with a 20-9 record.

“Overall, this season was a success,” Gustafson said. “We finished with a good record and I think we really clicked as a team in the last few weeks. One thing that everyone talked a lot about after last year’s success was whether or not we could build upon it since we wouldn’t be just a ‘young’ team anymore, and I think we proved that we are learning more each year. I think we can look back on the tournament and on the season and say that we don’t have any regrets, and that we fought hard till the end, which is the most important thing.”