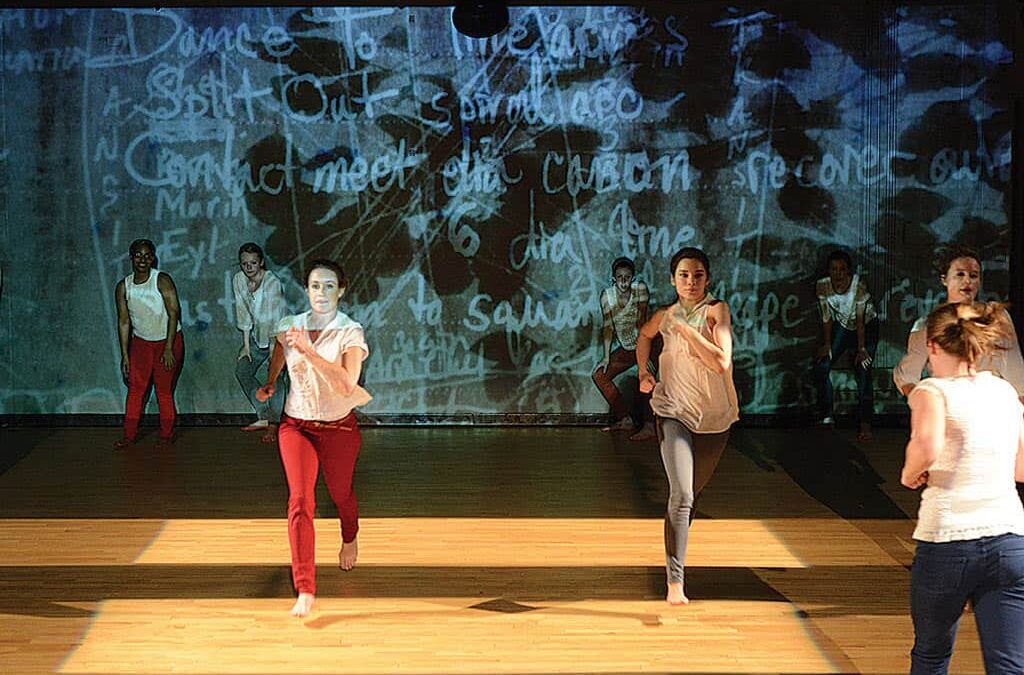 As both a Staff Writer and fine arts enthusiast, it was thrilling to attend a performance of “You Move, Move You,” which was hosted by The Dance Department .

The performance opened at 8 p.m. on Wednesday Dec. 4th and concluded with a 3 p.m. show on Saturday. This piece was broken into two parts, each choreographed by two professors from the Dance Department. The show featured over 20 students, whose years ranged from First Year to Senior. The first part of the performance began in the Knapp Performance Lab, followed by a brief intermission, where audience members and performers migrated down the Hill to the Doane Performance Lab.

Part one of “You Move, Move You” was called “And Now, and Now” and was choreographed by Professor Sandra Mathern. Upon walking into the performance space, I noted there was a solemn and reflective atmosphere. The lights were dimmed, and projected on the front wall of the room was the title of the show accompanied by a background of black and white images that faded into one another. Aside from the quiet chattering of audience members was a range of eclectic and calming lyric-less melodies, which gave the Performance Lab a calming and cool atmosphere.

The twelve student dancers performed with grace and intentionality; they dressed in all white tops and pants in various colors of the rainbow. The dancers took full advantage of the space, and during the performance, danced utilizing the entire space, including the ledges that audience members were seated upon.

An interesting aspect of their piece was the fact that ten audience members were invited to sit in the middle of the stage while they performed. First Year Oliver Deak  was one student who had the opportunity to sit center stage. Of his experience, he noted that “Sitting in the middle definitely shaped a lot of [his] experience, [and that] the 360° viewing angle was fascinating.”

Professor Stafford Berry Jr. choreographed part two of the performance, which was entitled “Bring It Out/Let In.” This piece was radically different in presentation and in style than “And Now, And Now.” Upon arriving at Doane Dance, after a cold trek down to South Quad, audience members were warmly greeted at the door by dancers, such as sophomore Michael Guerrero. The performance space felt inviting and there was a sense of anticipation and excitement.

This piece opened with student performers warming up around seven students warming up on the drums—something not common in many dance performances. According to sophomore dancer Graciella Maiolatesi, “[this] was an organic way [for the dancers to warm up] while the audience was coming in—Stafford wanted to create a very chill, welcoming environment, kind of like the environment that goes on ‘backstage,’ because it’s one that the audience doesn’t get to see to often.” Every dancer was dressed in either black or white “dabbas,” which are traditional African dance pants. This piece featured music that was native to Guinea, West Africa, as well as the song “Let The Groove Get In” by Justin Timberlake. Both provided fast paced and energetic beats that were necessary to give life to the African style dances that was being performed.

The entire performance of “You Move, Move You” was concluded with a tribute to Nelson Mandela. Graciella Maiolatesi ’16 mentioned that the concluding song was “… used to honor the death of Nelson Mandela; it was one of the traditional South African songs that were used during the fight against apartheid.” According to dancer Hailey Bruce ‘16, this tribute was added to the Friday and Saturday performances. The choreographers and dancers stood as one and ended by raising their fists in solidarity. This addition was beautiful and emotional to say the least.

If interested in exploring dance at Denison, courses ranging from Modern to West African dance are offered each semester.