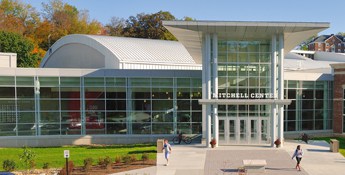 If you are a student who participates in the “Tuesday Question” email surveys, you may have had a hand in the conception of a brand new alternative programming event. The “First Saturdays in Mitchell” series hosted its inaugural event this past Saturday, Dec. 7.

The stress-relief festival was a collaborative effort, involving Courtney Testani, a junior from Trumbull, Conn., Lynn Schweizer, the senior associate director of athletics, and Catherine Champagne, the alcohol, drug, and health education coordinator.

Slayter hosts a similar event on the first Friday of the month; however, Testani said they chose to hold theirs in the Mitchell Center because it has more facilities to offer. In addition to the snacks and massage chairs available during Slayter’s events, the pool and hot tub, rec gym, and weight room were open late, and a yoga class was offered.

Testani, a biology major, said the series’ primary goal was to provide a fun weekend alternative to drinking and to help with stress relief for students who are feeling the pressures of impending finals.

While the event was well received by those who attended, Testani said the turnout wasn’t quite what they had hoped for, “seeing as it was our first event of the series, but we were also competing with a ton of other events both on and off campus.” She thinks that advertising will be key when planning for next semester.

Nevertheless, Schweizer reported that 30 people took advantage of the massage chairs, which are also very popular at the Slayter events.

Jill Weeks, a junior psychology major from Vermillion, Ohio, was one of those. “It was kind of a spur of the moment decision to go, but it was a really good stress reliever!” said Weeks.

Keep an eye out for more First Saturdays in the spring. Two events they have in mind are a “dive-in” movie and a basketball tournament for March Madness.