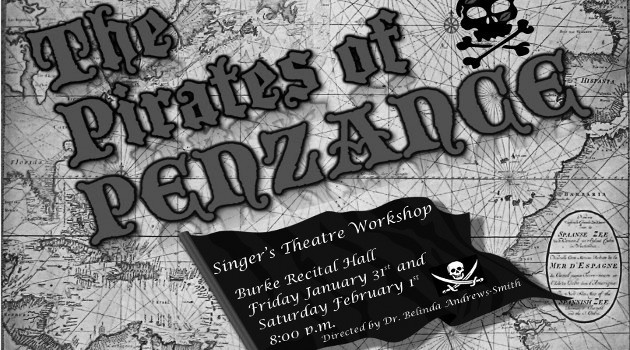 Gilbert and Sullivan’s The Pirates of Penzance is coming to Denison this Friday and Saturday, courtesy of Singer’s Theatre Workshop and director Dr. Belinda Andrews-Smith of the Music Department.

Now, if you’ve ever heard the tune of “I am the very model of a modern Major-General…”, you’ll realize where it came from! The show has been re-adapted for the stage and film several times in the 135 years since audiences first viewed this comic operetta in two acts.

“The Pirates of Penzance is about a hilarious chance meeting between a rollicking band of pirates and Major-General Stanley and his 13 daughters,” says Andrews-Smith. “The show is full of sword fights, beautiful maidens, young love, patter songs, and rousing choruses.”

Singer’s Theatre students began rehearsing the show in mid-October, as the workshop only met two days a week. Rehearsals began with music rehearsals, then moving onto memorizing blocking on stage, and finally running the acts separately until it was time to run the entire show from start to finish. Props, costumes, set, make-up, sound effects, and orchestra are added once the show is completely memorized.

Andrews-Smith says the show is “high-energy,” and is full of “dancing, clever jokes, tuneful songs, and beautiful singing!” says Andrew-Smith. If the quality is anything like last year’s productions of Les Misérables and Avenue Q, audiences will definitely leave feeling satisfied and eager for the next production.

For more information contact Belinda Andrews-Smith at 740-587-6220 or visit www.denison.edu/academics/music.

“We Too Are Denison”