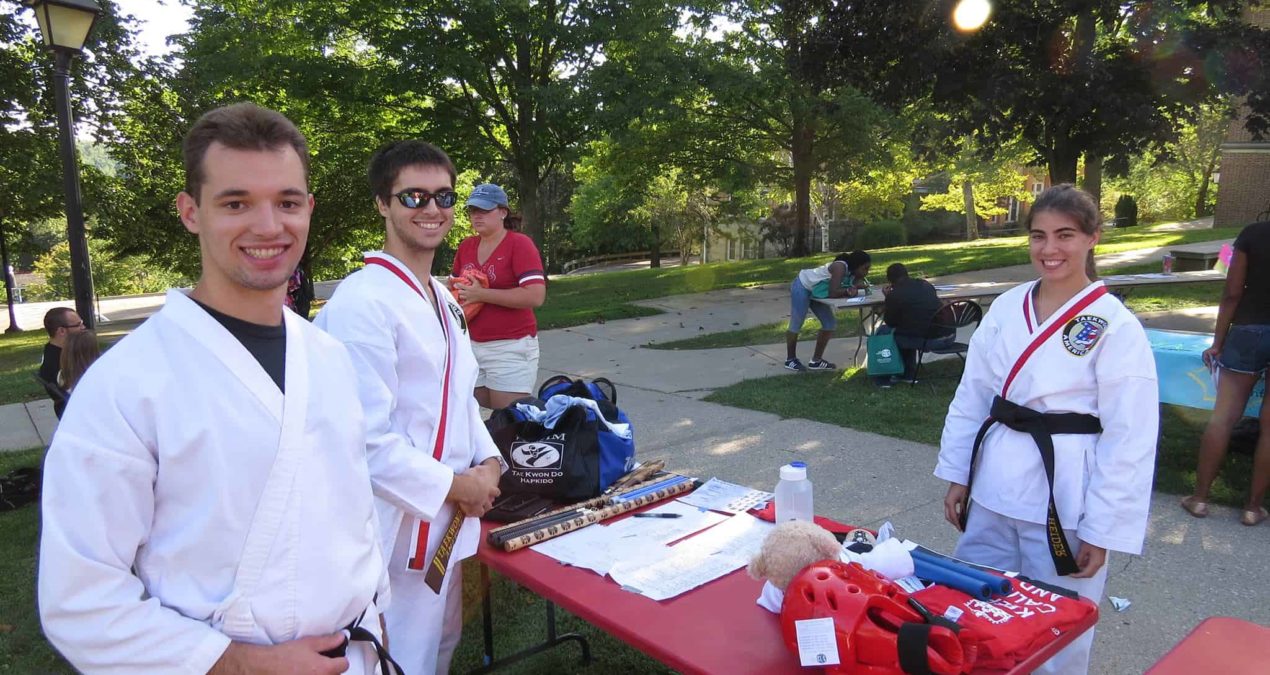 Taekwondo is a Korean Martial Art that stands for, “Art of the hand and foot.”

The sport combines combat and self-defense in a way that is fun, challenging, exciting, and a good workout. Here at Denison, the purpose of the club is to teach students and staff a new and unique art form in a way that each member will receive a specialized “workout” depending on their specific rank.

“Taekwondo is unlike other sports in almost every way. For most sports you practice with your team, and then go compete against other teams. In Taekwondo, however, instead of competing with other teams on a regular basis, you practice and practice, because in the case of martial arts, it is literally the journey that is important,” sophomore Trevor Masters said.

When an individual starts Taekwondo for the first time, they will start as a beginner white belt rank, learning the fundamentals of martial arts.

The fundamentals consist of the basic punches, kicks, and all around techniques.

“After about two to three months of practice (at least for the beginner and intermediate ranks: higher ranks require a longer period of time), not just of the moves and techniques, but also that of the mental skills and discipline learned, you have the opportunity to demonstrate these skills learned thus far in a test for the next rank, in this case a Yellow Belt,” Masters continued.

Masters expressed that the reason for the wait serves the dual function of testing a student’s discipline and self-control to continue practicing of their own initiative.

As the students and staff get higher in ranks, the difficulty and complexity of the moves, techniques, self-control, and discipline steadily increases.

It is imperative for members to be constantly challenged as they move up in their ranks.

“What is particularly nice about this is that, assuming you practice regularly (about two, one-hour classes a week) it takes a little less than four years to earn one’s Black Belt. This means that if you join the club as a freshman, you WILL have the opportunity to advance to Black Belt rank, as well as the opportunity to become a certified Tae Kwon Do instructor,” Masters shared excitedly.

The Big Red Taekwondo club practices on campus in the second floor multipurpose room in Mitchell three days a week: Sundays from 2:30-3:30 and Tuesdays and Thursdays from 7:30-8:30.

“Every year we have students who have never done martial arts before come and join the club as well as students who have done different styles of martial arts join as well. And in general, if a student has done martial arts before, their belt rank is usually maintained. In addition, athleticism is not at all a prerequisite for joining the Taekwondo Club: whether you’ve played sports all your life, or never played a sport before, you are equally welcome to come join and participate with us,” Masters expressed.

In addition to the Taekwondo Club, here at Denison students have the opportunity to take an Introduction to Taekwondo class offered for two course credit hours, and is offered both semesters.

The course usually takes place during the same time as club practices, this way student and staff members will have the opportunity to practice together and hopefully snatch some new members.