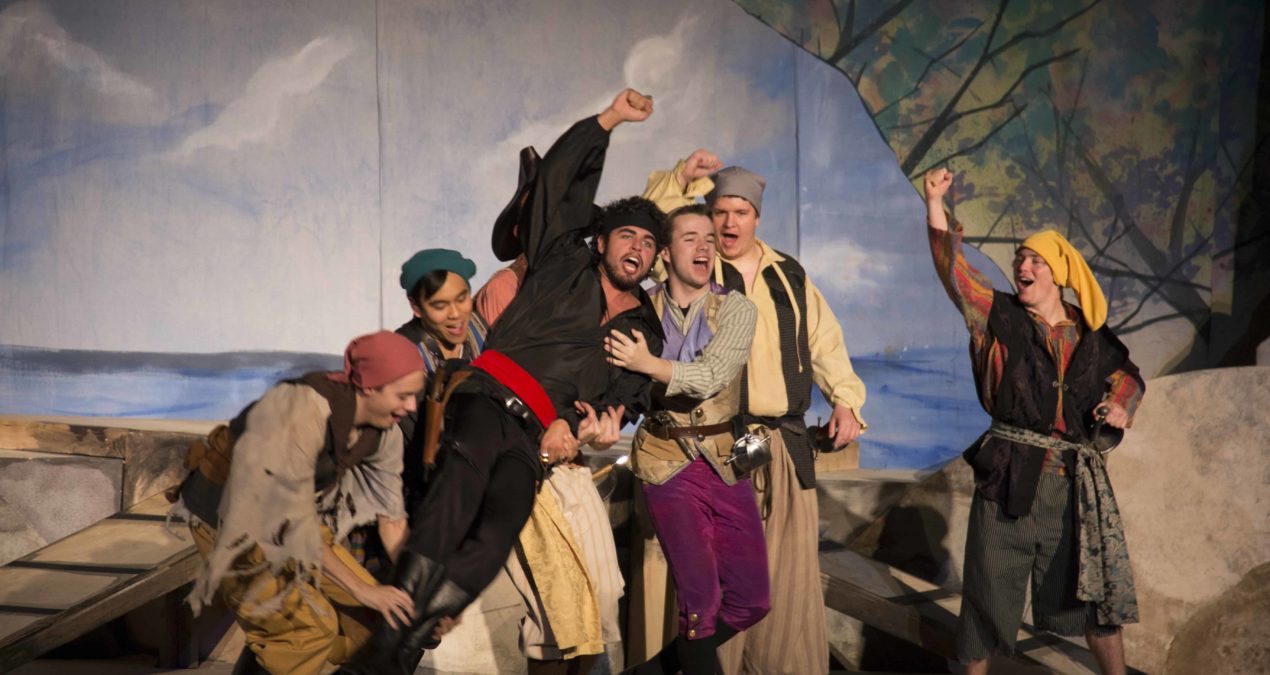 Opera-singing pirates happily pillaged and plundered Denison’s theatre this weekend. The Singer’s Theatre Workshop performed Gilbert and Sullivan’s “The Pirates of Penzance” on Jan. 31 and Feb 1. at 8 p.m. in Burke Recital Hall. It was an operetta, which means “little opera.”

The operetta started with everyone and their cousin coming onstage as pirates. The humor began instantly when Ruth, Frederic’s nurse (senior Laura Wilson of Bakersfield, California), admitted that she had meant for Frederic to be an apprentice to a pilot, but there was a miscommunication so now he was a pirate. Wilson had a brilliant accent, melodic voice and a strong stage presence.

General Stanley’s daughters took the stage next, and did a Mary Poppins-esque high pitched song and dance in uber-feminine colorful dresses. Picture Fleur Delacour and her friends from Harry Potter and the Goblet of Fire and you’ll get an idea for what these lovely ladies were like.

Mabel, played by junior Mary Libertini of Dublin, Ohio, fell in love with Frederic, played by sophomore Steven Hix from Dayton, Ohio. Libertini’s powerful soprano voice made me feel like I was at a real opera. Her voice could have given a Disney Princess a run for their money. Hix did a solid job with such a large role. He is a confident singer and embraced the part.

“I am the very model of a modern Major-General,” so sang Major-General Stanley (senior Ben Flox from Cleveland, Ohio) in the most famous Gilbert and Sullivan song. I think Flox may have been born to play such a role. He was a crowd favorite.

Another stage-stealer was the Pirate King (senior Chris Morriss from Allendale, N.J.) who continued his tradition of excelling in Denison theatre productions. He was very commanding on stage, had an impressive voice and was always in character. Even when another character was talking, he would have this intense pirate stare.

In Act II, the constabulary performed a cute Tweedle-Dee-and-Tweedle-Dum-esque song and dance. I found the childish bumbling actions to be really funny. The Sergeant of Police, played by junior Will Blount from Newark, Ohio, was especially entertaining because of his subtle but hilarious facial expressions.

The audience also realized that because Frederic’s birthday is February 29, he is actually only five years old instead of 21. The humor never stops. Since Frederic’s apprenticeship to the pirates ends on his 21st birthday, it is still his “duty” to be a pirate.

My only quarrel with Pirates was that at times I found the musical hard to understand. I couldn’t make out what people were saying or singing and I didn’t know what was going on.  It was a very fast-moving play with a lot of people on stage at once.

Overall, the costumes, props, sets and pit orchestra were amazing. It all came together really nicely, earning a standing ovation.

I’m always amazed at how hard my classmates and fellow Denison students work to put on such a great musical, on top of their usual classwork. Their passion for theatre and music shined through their performance.

Dylan Dyer, a senior cinema and Spanish double major from Athens, Ohio, went to see the play because she was familiar with it.

“I think I will enjoy it. I haven’t seen it before, but I know half the cast.” After the play, Dyer said she was impressed with the play and liked it.

Singer’s Theatre Workshop continues their tradition of wowing audiences by putting on such high-quality (and free) productions for Denison and Granville.

“If Beale Street Could Talk” resonates rather deeply with viewers