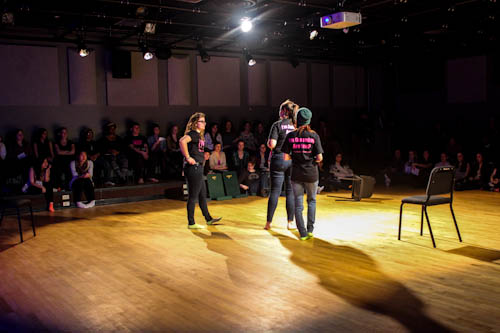 This year, Denison’s annual performance of the “Monologues,” as they are colloquially known, was a bit different, but no less powerful. In years past, Denison has performed pieces from Eve Ensler’s The Vagina Monologues, but this year, all of the pieces were written, directed, and performed by students, and were renamed The Genital Monologues.

Performances were held Feb. 21 and 22 at 8 p.m. in the Knapp Performance Lab, and on Feb. 23 at 2 p.m., and this year’s aim was to represent experiences of both women and men.

The Monologues kicked off with “Reasons I’m Not Going to Have Sex With You,” written by Meghan Callahan ’14, of Centennial, Colo., and directed by Niki Feehan ’14, of Bangor, Pa. “Reasons” was by turns humorous and powerful, as each actor gave a reason to decline sex that evening; answers included “Because you live with your mom…” and “Because I don’t need a reason to.”

The second monologue, “The Saturday Cycle,” written by Miranda Russell ’15 of Yellow Springs, Ohio and directed by Emily Carnevale ’16 from Columbus, Ohio, told the story of the “walk of shame” through four different voices, with each one describing the “stages” of the walk, from hurriedly scurrying back home to happily receiving a text the next day reading “Hey, what’re you up to tonight?”

The third monologue, “You Are Beautiful,” was written and performed by Alaysia Brooks ’16, of Union City, Calif., and directed by Imani Abernathy ’16, of Chicago, Ill. Brooks gave an incredibly powerful performance telling a story of sexual abuse and was accompanied by Abernathy’s beautiful singing voice intermittently throughout the monologue.

Following Brooks’ performance was “Consent,” written by Feehan and directed by Devin Daro ’14 from Wickliffe, Ohio. “Consent” starred Callahan, Eric Barnes ’14 from Delaware, Ohio, and Sam Phillips ’14 of Medina, Ohio, and described the many ways one could ask for consent from someone. When verging into “dirty talk” territory, Phillips walked over to the audience and playfully asked President and Mrs. Weinberg if they were “feelin’ a little uncomfortable,” causing the room to roar with laughter (the Weinbergs giggled in response).

“Street Harassment: A Love Story,” written by Meghan McGuire ’17 of Brunswick, Maine and directed by Blike, was a hilarious and relatable ode to catcalling performed by Ashley Holland ’14 of Akron, Ohio. The final monologue was “Expectations,” written by Wilson and directed by Washington-Ziegler. Starring Will Hamilton ’17 from Greenville, SC, and Taylor Nelson ’17 of Grand Rapids, Mich., the piece described the expectations men have for women and vice versa. Clever and also poignant, it ended on a note of acceptance, with Hamilton and Nelson screaming at each other before agreeing to just stop “expecting.”

As usual, the Monologues did not disappoint, and the unique Denison spin made the performances all the more special. “I was really impressed by the creativity and the hard work that was put into making their own production,” said Laura Venzke ’14, an economics major from Toledo, Ohio.

With more flexibility and creativity allowed, The Genital Monologues showcased immense talent and versatility from all involved.

Ladies Night Out performs off campus at Mai Chau