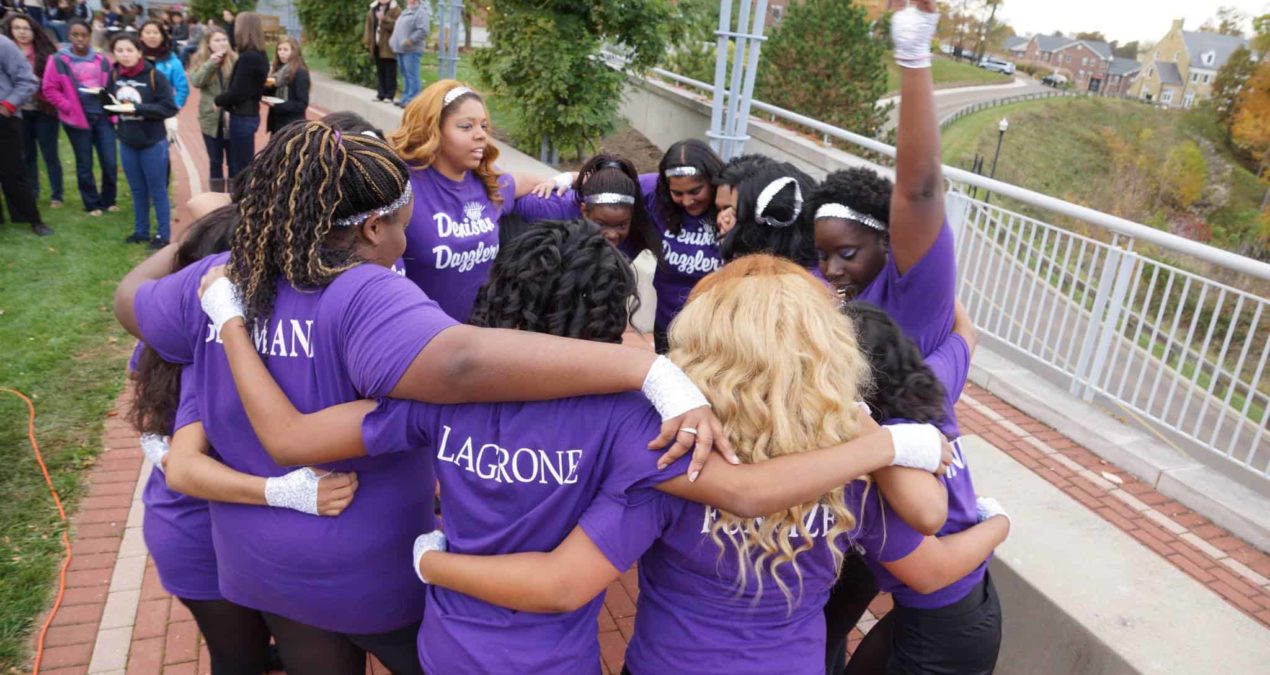 At last week’s Martin Luther King Jr. Day celebration in Swasey, Denisonians may remember the Denison Dazzlers, the self-described majorettes in purple shirts and black leggings dancing in homage to the civil rights leader. But that’s not the only place where the Dazzlers have been showcased: photos from last year’s Black Rhythms and Culture Jam programs as well as this year’s involvement fair and D-Day inevitably include the dance team of 11 women.

“I have been a dancer for most of my life,” says Jazmyn Jefferson, a senior from Chicago and English, Education double major. “But I didn’t want to do any of the dance things on campus.” Jefferson was approached to perform in last year’s Black Rhythms, a showcase of diverse performances hosted by the Black Student Union, and moved quickly to choreograph a routine with six other students, including a co-founder, Tempestt Williams, a junior from Orange, New Jersey and a sociology/anthropology major. According to Williams and Jefferson, their inaugural performance was so well received that they were asked to perform again in the BSU’s Culture Jam.

And she did just that. Today, the Dazzlers’ popularity has expanded and they have no problem attracting new members.

Rian Matthews, a sophomore from Washington, D.C. saw the Dazzlers’ first performance on Facebook. “I thought to myself, this would be cool,” says Matthews, who joined the Dazzlers last spring.

She was followed by Farha Khan, a sophomore from Elkins, West Virginia last fall, who discovered the Dazzlers after seeing them dance at the involvement fair. “I heard the music come on and I saw them perform,” says Khan, a resident assistant in East Hall. “One of my residents is a Dazzler […] and I asked her to sign me up.”

The Dazzlers’ performances, which involve complex choreography, are planned solely by the group, and in some instances, completed within a day or two.

“Once you pick up the music, it just flows out,” says Jefferson.

What’s next for the Dazzlers? Charity. The women are planning to perform at this year’s Relay for Life, and will raise money through “Dance like a Dazzler,” where they plan on teaching their routines.

Jazmyn Jefferson, who is graduating this spring says, “This is the beginning of what I see as my legacy.”