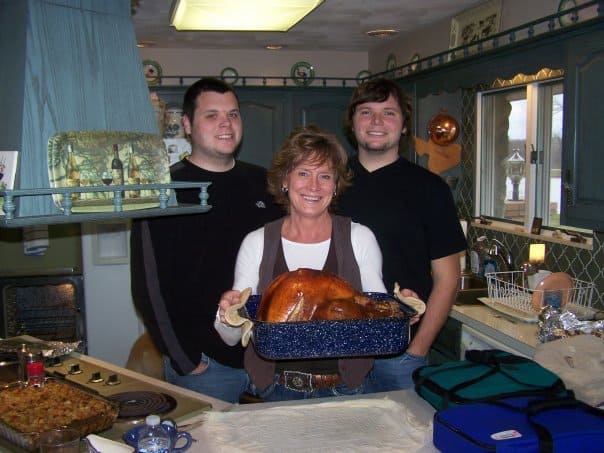 If you’ve ever been to Curtis Dining Hall, you know who Catherine is. Maybe you don’t know her by name, but chances are she knows yours. Catherine McFadden-Stuck is the cafeteria worker in Curtis who brings more to Denison’s campus than just Bon Appetit’s food — she brings a big personality, great conversation and the ability to make your day just a little bit better.  But there’s so much more to Stuck than what you can learn about her from talking to her for a few minutes more in the dining hall.

Stuck grew up on a 2,000 acre farm in Wilmington, Ohio, which is located in the southwestern part of the state. Stuck said it was a “great upbringing.” She continued, “There was so much to do! We played in the woods and in the barn with the animals.”

Stuck travels back to Wilmington monthly to visit her mother and her childhood haven, which is now owned by her nephews and is currently in its fifth generation of ownership.

During her summers—both when she was growing up and now—Stuck travels to her family lake house in Kentucky, which is about five and a half hours away from Denison. At the lake, she enjoys hiking, being outside with her dogs and water skiing.

She said she learned how to water-ski when she was young with the help of her parents. She reminisced, “my folks threw me on the skis when I was a kid and told me I couldn’t get back in until I could do it.”

Water-skiing at the family lake house is something that has survived generations of the McFadden family. She said that her granddad “died when he was 88 and skied until he died.” He helped teach many of his grandchildren, including her two sons, and great-grandchildren how to water-ski when they were younger.

She said the lake house had always been “a little piece of heaven on earth” for her and her family.

She still uses her summers to spend weekends at the lake house, but she also does something else: she goes to different major venues, such as the NASCAR track, with her husband to sell food in a business that they began, a concession truck called “Real BBQ, Really Good.”

They started this business after they closed down their restaurant that they owned for ten years, which was also called “Real BBQ, Really Good.” She said they needed to downsize the restaurant, and they had “always wanted a trailer.”

She also loves working with their concession business because, “it’s fun because [they] get to travel around.” She continued, “It’s an experience wherever you go.”

After Stuck graduated from high school, she went to Miami University in Oxford, Ohio, but she later transferred to The Ohio State University where she graduated in 1981 with a degree in business. She explained, “I was afraid I would get swallowed up at OSU, so I started off at Miami University.”

While at The Ohio State University, Stuck joined the sisterhood of Pi Beta Phi. She said, “I enjoyed my experience as a Pi Phi. I’ve actually maintained a lot of my friendships with other women in the sorority.”

After graduating from Ohio State, Catherine received an internship with IBM, which was a major competitor with Apple at the time. There, she was an assistant to the engineers and helped write the codes for the software.

She said, “the people in the marketing department advertised for the company’s products, while it was the job of the engineers [like Catherine] to actually make the products work.

But being the family woman Stuck is, she quit her job with IBM after having kids and worked as both a realtor and a teacher simultaneously to make sure she would have time to spend with her kids.

“I was a strict mom,” she said. “But my two sons are, and will always be, my greatest accomplishments.” Her two children—one 24 and one 28—both went to Ohio University. One of her sons works in engineering, like Stuck did, and the other son pursued a career in financing.

After her kids officially left the nest, Stuck began working at Curtis Dining Hall. She said, “It’s been a blessing to come here and see 1,100 kids a day.” She said, “The students make me want to come to work in the morning.”

Denison students love seeing Stuck as much as Stuck loves seeing them. Jennifer Vo ’16 from Muncy, Pa., said, “I can honestly say that I think Catherine is one of those really rare people who are genuinely kind and compassionate to anyone who is lucky enough to cross her path.”

Stuck said, “I just want to treat people the way I’d like to be treated.”

Vo, who is also a member of Pi Beta Phi also said, “When I became a Pi Phi, Catherine was one of the first people I wanted to share the news with. I was so proud to have a connection to her other than Denison.”

She said that one day, Stuck told her that she had a gift for her. The next day, “she handed [Vo] a small box very nonchalantly and gave me a hug before leaving to get back to box.” Inside the box, Vo found a “small and dainty gold ring that had the Greek letters of ‘Pi Beta Phi’ engraved into it.”

These acts of kindness are part of the reason why students love Stuck.

Stuck said that if she could tell all students one thing, it would be to “never be afraid of the unknown. Everything is just another chapter in the Big Book.” As for Catherine, she says the ‘Big Book’ “hasn’t been written in [her] life yet.”

Boys Will Be Boys -A poem