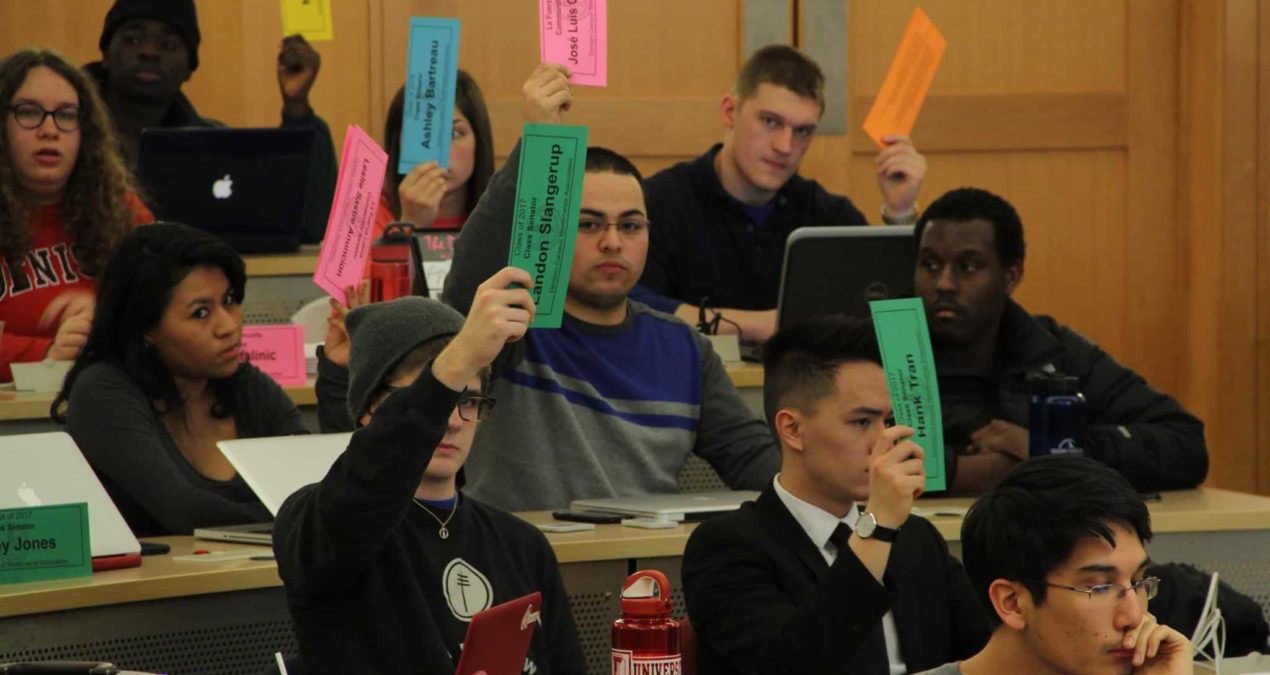 After three hours, DCGA does not fund any proposals

Forty-five minutes after the chamber has been called into order, DCGA begins the community discussion and debate about the five proposals for the development of the Denison campus, paid for by the now $834,000 reserve fund of unused student activity fees.

Part of the first 45 minutes were spent debating about whether or not Treasurer Steven Hix ‘16, a member of the finance committee charged with narrowing down the initial 47 proposals, could temporarily replace DCGA Speaker Meghan Pearce ‘16. The role prohibits the speaker from voicing his or her own opinions during debate, which Pearce wished to participate in.

Her sentiments were echoed by the Black Student Union community senator, Maya Zeigler-Washington ‘15, who said, “I think it’s a conflict of interest.”

Ultimately, the senate voted to keep Pearce as speaker to facilitate the dialogue on the reserve fund proposals.

The proposals were randomly drawn from a hat to decide the order in which they would be discussed, with debate open to both senators and community members. At the end of discussion, senators voted with electronic clickers in order to assess which proposals were the most popular—not which proposals would pass.This was described as “a preliminary order of support” by Pearce.

The first proposal discussed was the La Fuerza Latina social space, a project that would give the Hispanic student cultural organization a space for meetings and events, similar to that of the Black Student Union.

Senator Hix voiced his disapproval with the space, saying that it didn’t “fit with the guidelines” and that “all proposals must benefit the entirety of the student body.”

Hix, along with several other senators, wondered if having a social space for La Fuerza Latina would truly be open to the rest of the campus.

“Any space for a campus organization […] is open to the rest of the community,” said Senator Mills Duodo ‘15.

The clicker vote put 42 percent of DCGA expressing “preliminary support” for La Fuerza and 58 percent against.

The next proposal up for debate was one that would create a travel endowment for externships, but it was not well received by every senator.

“It’s the responsibility of Denison to be spending on our professional development,” said Stetson Thacker ‘14, former chair of the Finance Committee.

“If you’re going to vote for this because you think it’s more inclusive than La Fuerza, that makes no sense,” said Senator Erin Katalinic ‘16.

Freshman senator Hank Tran said he “did the math” on the externship endowment proposal and said that “it would only benefit .06 percent of all students that would come to this school” over the next twenty years.

Ultimately, the externship endowment garnered less than half of the Senate’s preliminary support.

One of the most popular proposals was the Social Spaces proposal, which seeks to redesign, update and renovate common rooms and dormitory spaces throughout campus. One of the proposals was a $165,000 bar for Chamberlin.

“Alcohol can destroy residence halls,” said Tiffany Davis ‘14, a resident assistant who voiced her support against the bar.

Still, former DCGA president and the representative for the social spaces proposals Drew Johnson ‘14 said that the proposal’s goal was “more fun to be had, more social interactions.”

Seventy-four percent of the senate voted in support of the Social Spaces proposal.

Another proposal to renovate the Roost found high support at 73 percent of senators voting for it.

“It’s the most inclusive [proposal],” said Raghav Daswani ‘15, a member of the Dining Committee and one of the co-writers of the $275,000 Roost proposal.

However, Slayter, which is where the Roost is located had been slated to be renovated in its entirety as a part of a master plan a few years ago.

“I would be surprised if [the Slayter renovation] happened in the next ten years,” said Seth Patton, Vice President of Finance and Management for the college.

During debate on all five proposals, Senator Hix offered a compromise on the La Fuerza space: to make it a room open to all sixteen of Denison’s multicultural organizations.

“To group all of the multicultural organizations in one room is doing a disservice to them all,” said Celeste Alsina ‘15, a member of La Fuerza Latina.

After more than three hours, the meeting was adjourned shortly before 10 p.m. last Tuesday night with no formal vote on the proposals.

The DCGA will meet again next Tuesday at 6:30 p.m. in the basement of Burton-Morgan for a formal vote.