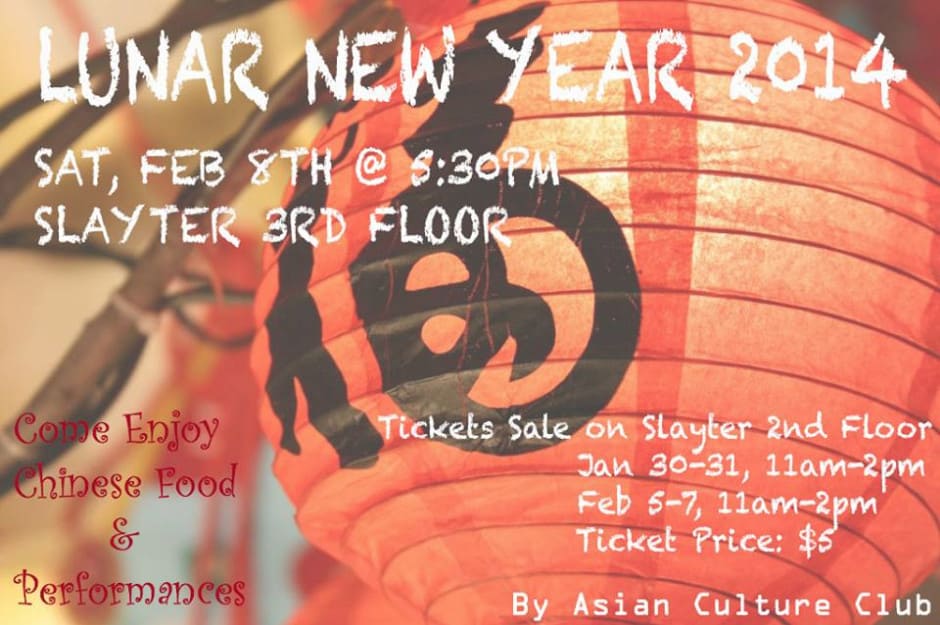 The third floor of Slayter was illuminated with lights and decorated with hanging balloons last Saturday in celebration of the Lunar New Year. In addition, clothed tables and floral centerpieces adorned the seating areas. Eleven performances took stage as those in the audience enjoyed authentic Szechuan-style cooked foods and treats of the Asian culture.

“The Lunar New Year was a beautiful cultural event,” Amber Garcia, a first-year student from Boston, MA said. “It allowed me to become more culturally aware of Asian traditions.”

Junior Sunder Willett from Georgetown, KY, one of the event hosts, said the Lunar New Year Festival is hosted by the Asian Culture Club every spring. He said, “We had a fairly even representation of Chinese, Japanese, Korean, and Vietnamese culture on stage which is something the ACC really tries to do because it is not just a Chinese or Korean holiday.”

“I was touched by the way all the cultures came together regardless of nation,” mused Grace Bachman, a first-year student from Columbus, OH. “The performances were beautiful and the way the audience appreciated them was a great experience.”

Performer Chi Nguyen, a first-year student from Vietnam, sang in a group of five people the song, “Khúc Giao Mùa,” which translates to “Time of the Season.” The song expresses the happiness and joy felt as the New Year rolls in and the scenery and weather transition from bitter and cold to blossoming and warm.

“The New Year is the biggest celebration in my country,” she stated. “At home, we sit with family and friends, have dinner, and talk together. It’s just so meaningful. It’s good to have the celebration here [in America] so we remember how we’re together back home.”

Vice-President of the ACC Elise Bowling, a senior from Newark, OH, who also hosted the event, was very pleased with the crowd turn out. “The most exciting part of publicizing this event is that I know that there is a very strong community of Asian students as well as students who are simply interested in Asian culture,” she said.

But she still feels that Denison students can sometimes feel disinterested in Asian culture. She said,“a lot of times it isn’t prevalent enough in the school community.” But still, Bowling said other students delight in this event because it “brings to light this huge cross-cultural bond that Asian students and those who love East Asian culture can share.”

For more information on how to get involved with the ACC and other related events, feel free to contact Elise via email at [email protected]