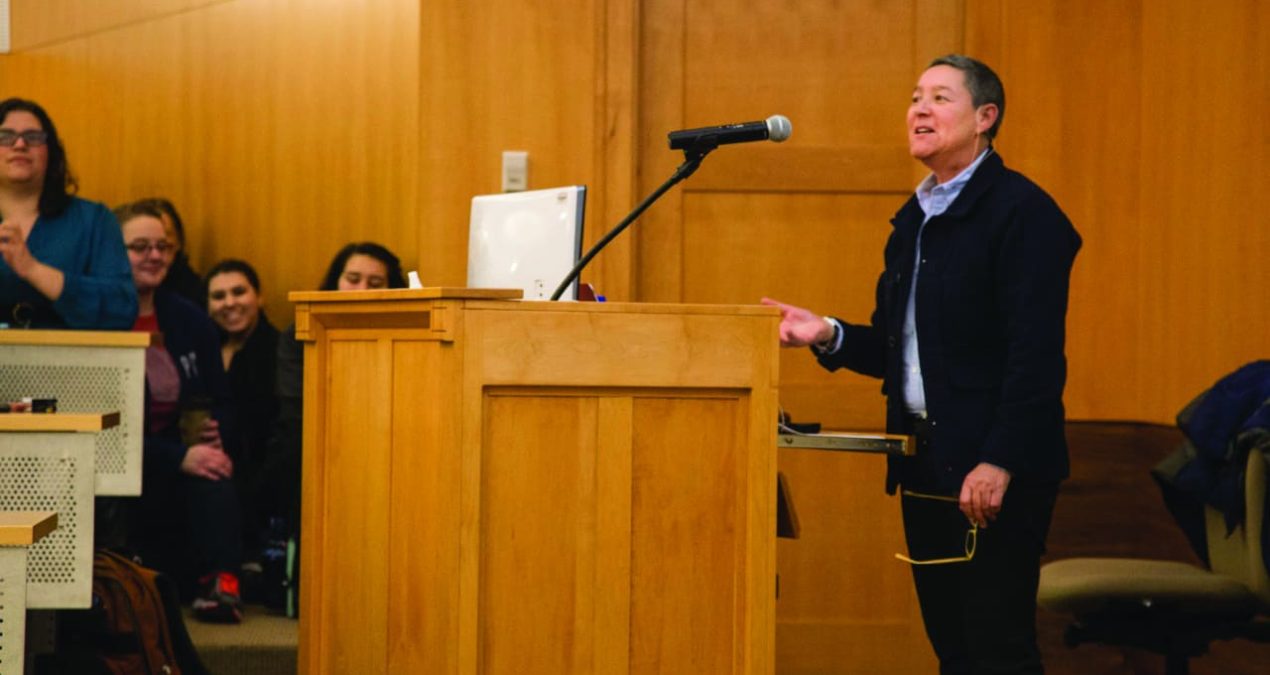 By Emily Shane, Special to the Denisonian

“Feminism is not a thing of the of past, but we do need a new version,” Jack Halberstam, English professor at the University of Southern California and author, argued when he visited Denison on Jan. 30 to give a lecture entitled “Gaga Feminism.” Halberstam encouraged the audience to work on re-inventing the idea and definition of feminism in the ‘gaga’ world of the 21st century

While Halberstam said he was not going to explicitly tell the audience how to change feminism, he did provide his manifesto as a guide. The three steps of the manifesto were “1. Embrace the iJampractical, 2. Start a p**sy riot, and 3. Go wild.”

Halberstam proposes anarchy as the vehicle to change feminism and the existing socio-economic structure. He pointed to the Occupy Movement as an example of an anarchist way of “[creating] disruption and [making] people think differently.” He said, feminism “can be a vector for a critique of global capitalism.”

One of the more controversial aspects of his lecture was his opinion on gay marriage. Halberstam does not support the practice and considers it a way of recruiting white, rich gays to support the state. He says homosexuals are “fooled by gay marriage to think that the state is benevolent.”

During his speech Halberstam referenced many notable feminists and thinkers, including Beatriz Preciado and Shulamith Firestone. At the end of the speech he showed a video of the performance artist Boychild.

Jessie Hankes ’17 of Edina, MN explained that she attended Halberstam’s speech “because the issues in the talk are important to [her].” Freshman Hannah Zwemer from Whitehall, MI concurred, “It sounded really interesting” and was relevant to her studies. She also said she found it especially interesting because it related to her coursework.

In addition to the Denisonians who attended the lecture, there were also a handful of graduate students from The Ohio State University. One said they visit Denison frequently for the Laura C. Harris speakers because “it’s a wonderful series of events.”

Overall, the speech was well received by the students.  Paige Robnett ‘14 from Bloomfield, MI said, “I am so excited that he’s on campus.” Katie Darrah ‘17 from Mason, OH agreed, “I thought it was really interesting.  I really liked it.”

Halberstam’s speech was part of the Laura C. Harris Symposium. The series, whose theme this year is Feminists Ask What If…?, has brought many prominent speakers to campus including Hanna Rosin, author of “The End of Men: And the Rise of Women,” and M. Jacqui Alexander, author of “Pedagogies of Crossing: Meditations on Feminism, Sexual Politics, Memory and the Sacred.”

The next event in the series will take place on Thursday, February 13 with a presentation by Linda Alcoff and Laura Gary-Rosendale entitled “College Girl: Telling our Transgressive Survival Stories.”