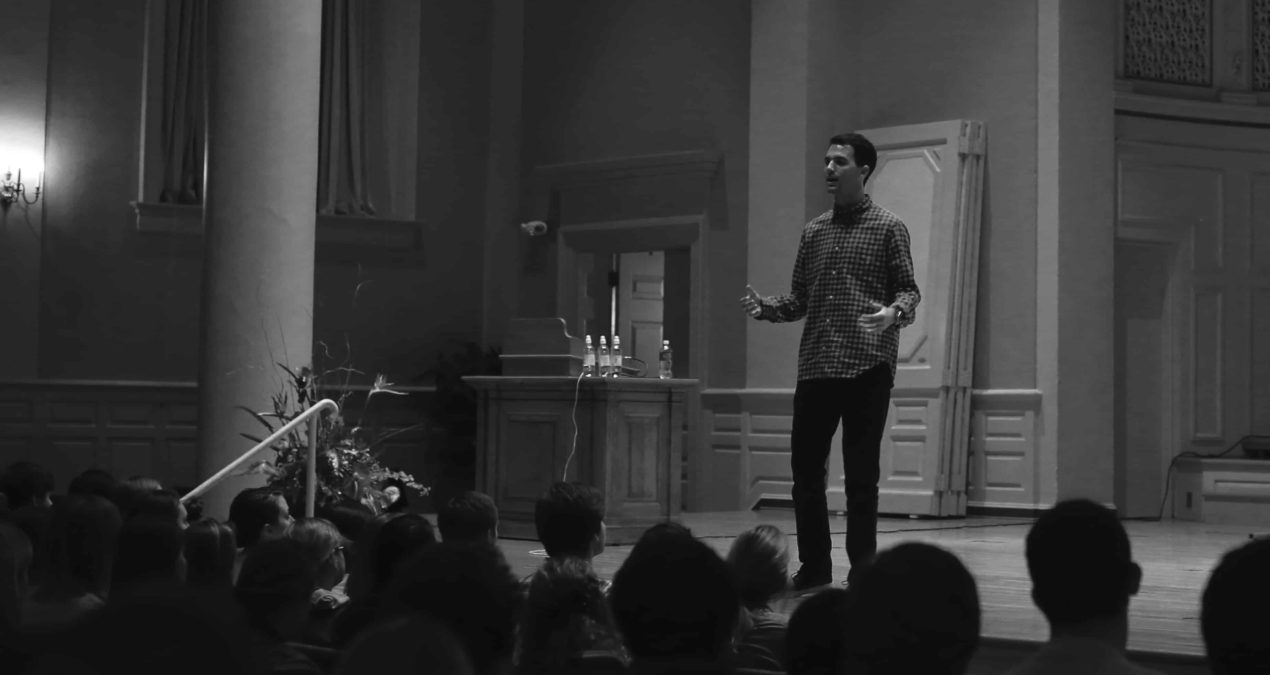 by Jake Dennie
No Comments

“Be kind, for everyone you meet is fighting a hard battle,” Jeremy Poincenot quoted from Plato during his speech to the Greek community on Thursday. Poincenot was the keynote speaker for the Fraternity and Sorority Life Convocation, a biannual event that occurred last week in Swasey Chapel.

Poincenot, as he described in his speech, has a rare genetic disorder called Leber’s Hereditary Optic Neuropathy, which caused his vision to suddenly go from 20/20 to legal blindness over the course of two months while he was a sophomore at San Diego State University.

In general, the purpose of the Fraternity and Sorority Life convocations is to gather the Greek community and help them realize the benefits of Greek life.  Stetson Thacker ‘14, Beta Theta Pi member and Biology/english double major from Cleveland, Ohio, said “It’s kind of a community building activity for one, but also it’s an educational activity… to learn more about how Greek life can positively affect their lives.”

This idea that Greek community members can and should be rocks for each other during times of struggle constituted the primary message of Poincenot’s talk.

“I was devastated, depressed,” Poincenot explained, “I thought ‘Why me?’ every single day for a month.” However, as Poincenot described, his Sigma Phi Epsilon brothers coerced him back onto his feet and helped him learn to appreciate life again.

The second message had to do with finding happiness in life, regardless of obstacles. Poincenot narrated his story of winning the World Blind Golf Championships in his blindness division, the most memorable part of which was his description of an elderly, completely blind golfer he met named John Cosolo, who, despite being a terrible golfer, found immense happiness in the game.

Poincenot went on to explain how the “grass is greener on the other side” mentality is unhealthy, and that everyone should learn to appreciate and find happiness in what they are given.

According to accounts from some attendees, Poincenot’s presentation accomplished this goal. “It was really neat to hear such an inspirational story from the speaker about what a positive impact the Greek community can have on someone’s life,” commented Anna Burton ‘17, a freshman Biology major and Tri Delta pledge from Martinsville, Ind.

However, James Le, a freshman Beta pledge and Communications major from Hanoi, Vietnam, was surprised by how little Poincenot tailored his speech toward Greek life. “Only a very small [portion] of his speech directly addressed the fraternity brotherhood. The rest of the speech was more about his personal story and the lessons he learned in life.”

Finding a speaker like Poincenot takes a lot of effort, according to Katherine Palms ‘14, a communication major and Tri Delta member from Grosse Pointe, Mich. “The process is in-depth. In the spring of 2013, I began looking for different speakers to bring to campus [and] attended AFLV (Association of Fraternal Leadership and Values) conference in Indianapolis.”

Most of the convocation speakers come from this conference, but Palms heard about Poincenot from a former speaker and, as the former Vice President of Programming for the Panhellenic Council in charge of the speaker for the 2013-14 academic year, decided to bring him in.

Greek Convocation is an annual event that seeks to unify the Greek community.

Denison to hosts its own TEDx