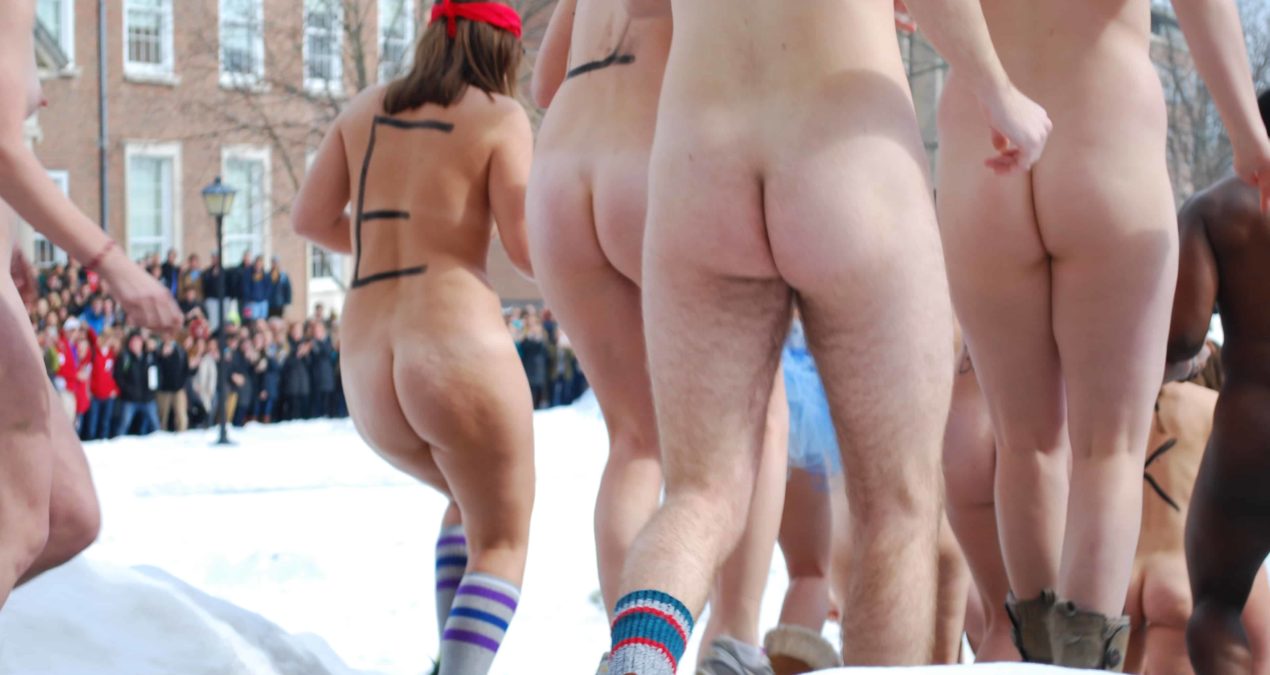 Frigid weather didn’t deter hundreds of Denison students from participating in the eleventh annual Naked Week. About one seventh of Denison’s entire student body—312 students—ran across East Quad on Friday, the final night of the cross-campus nude runs.

Lauren Jay ‘14, from Westerville, Ohio, was this year’s “Naked Queen,” or coordinator of Naked Week. Through a Facebook group, she coordinated the routes, themes, and origins of each run. This year’s festivities included America night, in addition to the more traditional LGBTQ and animal-themed runs.

She said the purpose of Naked Week is “primarily to promote body awareness. There’s this stigma in the media about what beauty is defined as. I believe that the main purpose of the week is that everyone is beautiful, no matter what size, shape, body form.” Naked Week usually falls near National Eating Disorder Awareness week, which also promotes healthy body image.

Though the event encourages public indecency, it has a friendly relationship with the campus. Jay said that security has “an unspoken acceptance” toward it, and even opened the doors for running students this year.

Psychology major Erin Katalinic ‘16 from Columbus, Ohio, has participated six times. She said running is “a natural high. This is when I am not hiding anything, and I have confidence in the moment.”

Emily Smith ‘15, from Mars, Pa., ran for the first time this year—unexpectedly. “It started out with a joke between my roommate and I that we would run for her birthday…  Sometime last week, we decided we should actually do it.  It was actually really great.”

But some see Naked Week as more spectacle than social commentary. The first run of Naked Week is the Opening Ceremony traditionally run at half past noon on the Monday of Naked Week, coincided with Denison’s Junior Visit Day. Charlie Vinopal ‘16, from Park Ridge, Ill., works as a tour guide for Admissions. He said his tours last Monday had “a really great sense of humor about it,” but that other families may not have been comfortable, and Naked Week may not be the most effective commentary.

“There are much more constructive ways of promoting self-body image and awareness for the entire campus,” Vinopal said. “I think it’s great that these brave people get the courage up to do it, but I think it really doesn’t have an effect on the rest of the campus other than  making some people uncomfortable.”

Though it makes some onlookers uncomfortable, the process of running naked can also make people comfortable in their own bodies. Smith said, “I’ve always seen myself as on the chubby side of average, and for the first time in my post-pubescent life, I felt that my body was not only acceptable but worthy of being celebrated.”

For others, the benefit depends on what you put in. Katalinic said, “if you go in looking for body positivity, you’ll find it. We all have flaws.” She also said her participation has been recognized by those around her, “especially after the opening ceremony, going to Curtis, people I’ve never known were high-fiving me.”

And these success stories are, in a way, the point of Naked Week. Jay said, “I was overwhelmed with joy when I received messages from students I don’t know or running for the first time, telling me how this week has changed their lives, or how they’ve never felt more secure in their than when running… Naked week to some might be absurd, but to others, it’s life changing.”