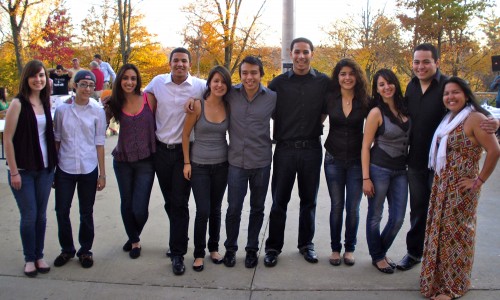 By Shaleen Sharan, Special to the Denisonian

One of the biggest problems facing La Fuerza Latina is the issue of a space of their own where they can meet. “We have an office, but we can barely fit even three people in and still be comfortable,” said senior Ashley Johnson, the club’s president.

“We meet in the University Room, which we have to reserve every year, and the other organizations’ meetings around our meetings means we have to rush in and rush out,” Johnson said. The events they have also have to be held in various spots on campus and Johnson mentions that the club always has to fight other organizations for a place for their events. She feels that having their own space would make it much easier for them to meet and organize their events.

“In the past year, we also created a dance group, Sazon, and we will have a space for that dance group to practice without worrying about interfering with other groups,” Johnson said.

“But we would still let other organizations use our space.” Johnson also maintains that having their own space on campus would provide the atmosphere they wish to bring to Denison and a little piece of home for those familiar to the hispanic community. However, the path has not been easy.

“Earlier we had inquired about a space which was actually the old Denisonian space but we were told it was going to become a multicultural library,” Johnson recalls, “but it actually became the Sustainability Fellows Lounge, which seemed weird because we were told it would become one thing and then it became something else for another new organization on campus. We took it for what it was and kept moving forward.”

The organization has proposed other locations, such as in Huffman and at the bottom of Chamberlain or Sunset House, but is flexible about the location as long as it easily accessible to the students. So far, they have received a “maybe” from the DCGA regarding the space, but they are planning to attend DCGA again today to get a finalized answer.

La Fuerza Latina has been a campus organization for nearly 18 years and had started originally as a support group for the Hispanics. The campus has organized events that highlight Hispanic culture, such as the Dia de Muertos and Las Posadas events last year, which were open to all. Hispanics form the largest minority group on Denison campus but they are still struggling to get a space on campus.

La Fuerza Latina welcomes students of all ethnicities and meets in the University Room on the 4th floor of Slayter on Thursdays at 7:30 p.m.