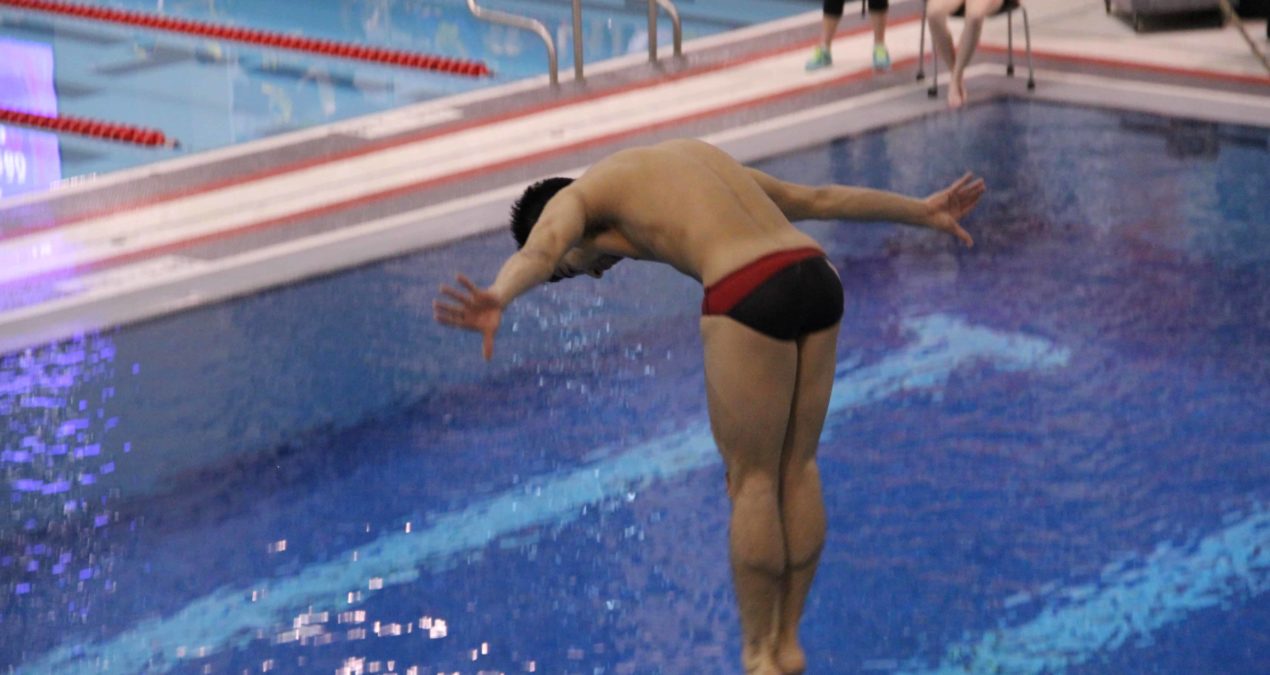 A Big Red swimmer fights her way to the finish.

The conference championship started out as an uphill battle for the women. The Big Red trailed Kenyon by 40 points at the conclusion of Thursday night’s session and then brought their deficit down to 26 points heading into the final day of competition on Feb. 15. In that day the women defeated the Kenyon Lords 1839-1805.

The Big Red women won seven total events, set one meet record and totaled 21 All-NCAC finishes to defeat Kenyon for the sixth year in a row.

“It was a great feeling winning conference,” Ashley Yearwood ’16 said. “I honestly couldn’t describe the emotions we all felt. Coming off of an extremely emotional week and then going on to win Conference created emotions that I could not explain.”

The women’s divers bolstered the team’s performance on the final night. The Big Red’s three freshmen divers went 3-4-6 in the 1-meter board. Sarah Lopez ’17 came in third with 369.70 while Morgan Christman ’17 followed in fourth with 365.85 and Carrie Bookheimer in sixth (351.15). Bookheimer also placed third in the 3-meter board on the second night of competition with an 11-dive score of 358.

Several women traveled to Kenyon College this past weekend to compete for the final time in the hopes of achieving NCAA ‘B’ cuts and qualifying for the NCAA Championships in March.

Howell posted a ‘B’ cut in the 100 fly with a time of 57.07. Krysta Garbarino ’16 swam a 2:04.80 in the 200 fly time trials and Rima Jurjus ’15 touched the wall in 23.73 in the 50 freestyle to earn her first NCAA provisional qualifying time of the year.  Christman placed second in the 1-meter dive with 432.45 to earn her second ‘B’ cut of the year, qualifying her for the NCAA Diving Regional which will be held at Trumbull Aquatics Center this weekend, Feb. 28-March 1. The men edged Kenyon 1898.5 points to 1851 to take the conference championship for the sixth year in a row. It was the first time in program history that the men were successfully able to defend their crown at home.

The meet was highlighted by junior diver Connor Dignan’s two national records in the men’s 1-meter board and 3-meter board dives. Dignan kicked off the championships by crushing the national record in the 3-meter board with a score of 645.70. The junior followed that performance up two days later with a record-breaking score of 578.70 in the 1-meter dive. The junior was named NCAC Men’s Diver of the Year for his accomplishments.

“I was a little shocked after I first broke the record in prelims,” Dignan said. “I hadn’t realized how close I was until my last dive. Holding the national records on both boards has been a goal of mine since freshman year; it was a lot to take in all at once, especially since I didn’t expect it. When I broke it again in finals, it was a much more satisfying and complete accomplishment. Being able to do it once was great, but doing it twice gave me the confirmation of really owning it.”

The divers will compete at the NCAA Diving Regional this weekend.

“Our men’s divers are looking very strong,” Dignan said. “I have no doubt that each and every one of them has the capability of qualifying for nationals and to go on to score in Indianapolis. I think it’s going to be a great conclusion to our season.”

Fleming won the 50 freestyle with a time of 20.45, with Wuorinen came in second.

Wuorinen said that the loss of David Hallman ’14 served as motivation for the swimmers. “Losing Dave was a huge hit for the team,” Wuorinen said. “It emotionally drained each and every one of us, making it harder to perform during the meet. The team did a great job stepping up and trying to leave a legacy in the name of Dave.”

Rosenburg won the 100-breastroke for the third straight year, breaking his own meet record with a time of 54.66. The junior set the national record in the event (53.61) in December at the Miami Invitational. Al Nennig ’17 came in third in the event with a time of 56.23.  Rosenburg teamed with Spencer Fronk ’14, Wuorinen, and Fleming to win the 200-medley relay in a time of 1:30.17. Maciel took home the win in the 200 freestyle with a time of 1:38.43. Fleming, Wuorinen, Fronk and Maciel swam to a second place finish in 2:59.71 in the 400 free relay to solidify their win and finish off this year’s edition of the NCAC Championships.