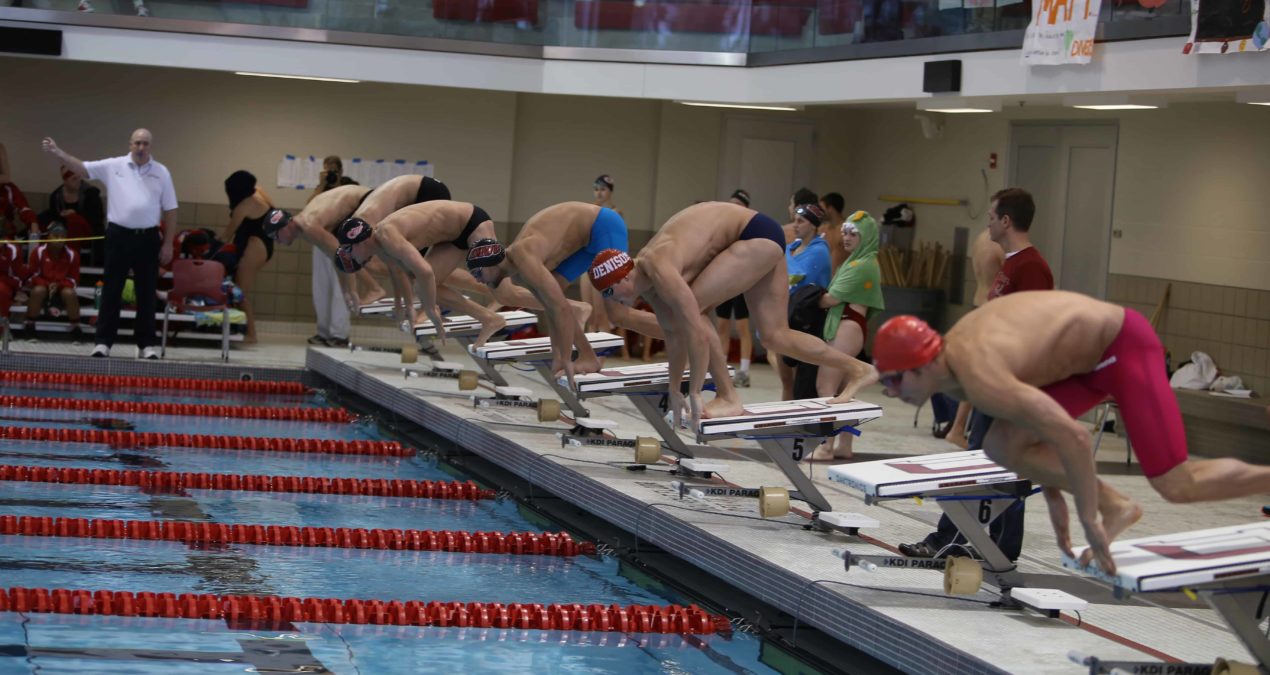 By Neil Riley, Special to The Denisonian

Since 1998, the annual North Coast Athletic Conference Swimming and Diving Championships have been held at the C.T. Branin Natatorium in Canton, Ohio – far from this fair college on the hill.

On February 12, however, the honor of hosting the meets will be passed to the Big Red men and women, when they will battle their conference rivals at the Trumbull Aquatics Center.

Denison will welcome the change in setting and will seek to recreate the results of the previous few conference championship performances.

The last five years of conference play have been painted red and white, but history has been overwhelmingly dominated by the Lords and Ladies of Kenyon who have won 23 of the past 29 NCAC titles and own last year’s Men’s NCAA Division III National Championship.

Undoutably they will seek to retake the conference Championship and later defend their national title against the men of Granville.

In the bitter rivals’ first encounter earlier this season, the Denison men bested Kenyon and thoroughly proved themselves the team to beat this season.

On the backs of the foursome of seniors Carlos Maciel, Spencer Fronk, Sean Chabot and sophomore Conrad Wuorinen, they would overcome their Gambier competitors 153.5-146.5, while the Big Red women would top the Kenyon Ladies 164-136.

Both Denison squads enter the conference championships with momentum on their side.

On Senior Day last week, the women trumped Ohio Wesleyan 156-64 ending the regular season with a strong victory.  Senior Natalie Lugg stepped up in her final dual meet in Trumbull, swimming her way to a sweep of the breaststroke events with the help of sophomore Marissa Bednarek.

Also leading Denison’s attack were juniors Michelle Howell, winner of both individual medley events in last year’s NCAC championship and Molly Willingham, a two-time NCAC champion and important asset in the backstroke, will both be exciting to watch this Wednesday.

The Big Red will not be wholly reliant on veteran experience.

According to sophomore Ashley Yearwood, finding leaders will not be a problem for the squad going in the future.

“The members of the 2013-2014 team have a motto” said Yearwood.  ‘Non Ducor Duco,’ which means ‘I am not led I lead.’  We are all leaders in the sense that we can take inspiration from anyone on the team.”

Lugg, Howell and Willingham are three of only 11 upperclassmen and 27 underclassmen rounding out a squad that is far from top heavy.

This makes the seniors all the more important to the team.

“Being on the team for three and a half years gives you a lot of wisdom about the sport and the competition we are about to experience,” Yearwood said.

“They, as a group have been through a lot and are still able to give so much contagious and positive energy.”

Despite inexperience, the team is  as explosive as ever, and Denison will look to the talent of underclassmen in the NCAC championships and beyond.

Sophomores Yearwood and Taylor Johns and freshman Carolyn Kane have assumed important roles and a Big Red victory will hinge their performances.

In the men’s Senior Day dual meet, the Big Red came out on top, 159-93, against a respectable Ohio Wesleyan team, showing their depth as a squad.  For the men, it would be freshman Max Levy who would shine in the senior’s last dual meet against the Bishops.

Levy earned North Coast Athletic Conference Athlete of the Week honors for his 11-dive score on the three-meter board.

“This season has been great for all of us” Levy said after the meet.

He credited his mentors and the upperclassmen, saying that he “could not have had that great of a meet without [his] teammates” who “helped with visualization during the meet.”

Momentum will be critical for the Big Red going into Wednesday.  Levy mentioned that the team’s confidence is at an “all time high going into the conference meet.”

In contrast to the youth of the Denison women, the men are built around a strong squad of upperclassmen and they will look to retain their title at the NCAC championship for the sixth year in a row.

Seniors Jackson Humphrey, Carlos Maciel, and Al Weik will be the leaders of the team on Wednesday.

Weik, already a 12-time All-American will aim to be the second swimmer in NCAC history to win four-straight 1,650 freestyle titles.

Also highly anticipated is junior Damon Rosenburg’s events this Wednesday as he owns the NCAC’s top time in the 100.

Preparation will be key in the coming days as Wednesday approaches.