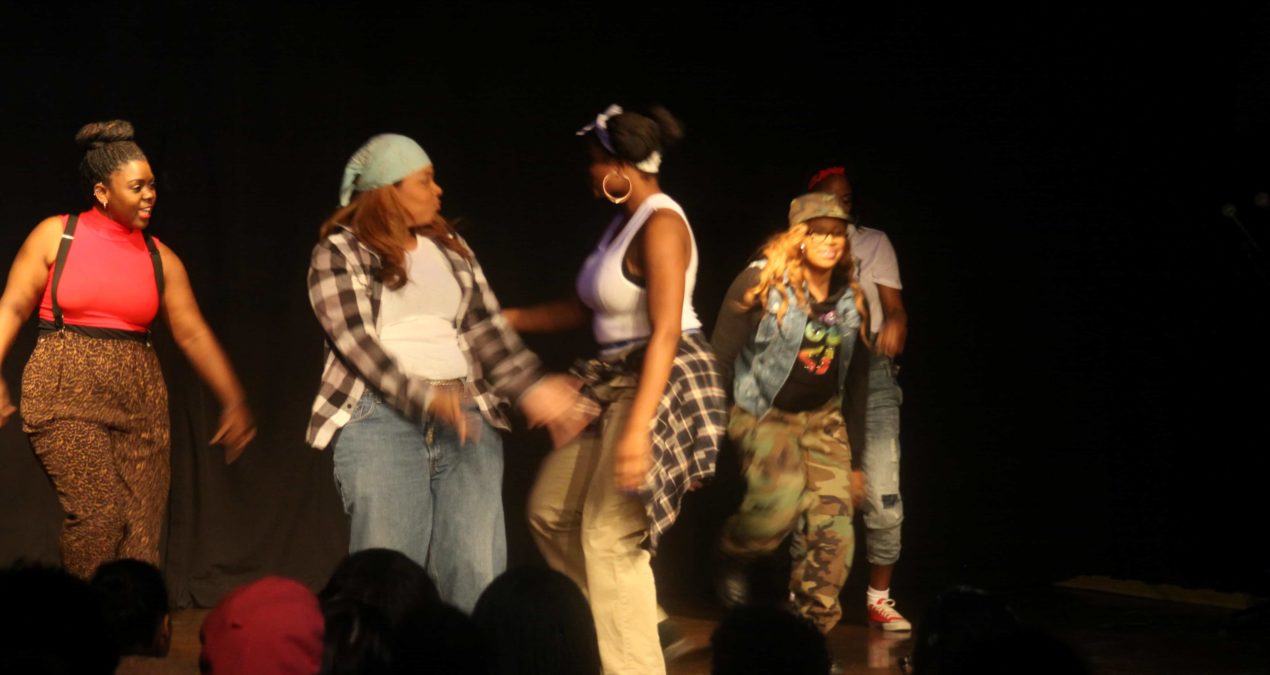 The Denison community flooded into the Roost: energy buzzed throughout the space as they chatted with one another and began to find seats. The room was packed, and those without a seat lined up along the periphery, not wanting to miss the highly anticipated annual Black Rhythms showcase.

The lights went out as a voiceover of  “The Racial Wage” by W.E.B. DuBois radiated from the speakers, and the showcase commenced with the entire cast of 30 students silently assembling on stage and depicting the Brown Paper Bag Test.

Cast members were separated by skin tone—those with a skin tone lighter than a brown paper bag were in one group, and those with a darker skin tone were in the other. This silent movement spoke volumes of the effects and detriment of this historical process.

Following this opening, there were performances by both individuals and student organizations, including Denison’s National Panhellenic Council. A spoken word poem by Brandon Hummons ’13 entitled “Henry” especially resonated with the audience. One element of this piece discussed African American heritage that is, in many ways, rooted in slavery. Hummons alluded to a stolen identity of African American individuals—during this time, many slaves were given names by their masters.

Hummons stated that with the help of current popular references, he was able to connect the different generations he addressed in the piece. He later elaborated, “[I took] a very personal piece of my history and [expressed] it though a story… for me, it was a story of courage and growth.” The poem concluded triumphantly with a call to action of solidarity, placing an emphasis on building a legacy within the African American community.

Additional poetry read included original work by Cheyenne Evans ’15 and a reading by Na’il Scoggins ’17 of “As I Grow Older” by Langston Hughes.

To lighten the mood after a sequence of powerful content, Khari Collins-Riley ‘15, and Imani Abernathy, Khadijah Hawkins, Dyamone Hopkins, Rian Matthews, and Keylee Jones, all class of ‘16, performed a 90s dance mix. In addition to student covers of famous songs by Marvin Gaye and R. Kelly, the Denison Dazzlers closed the show with a precise routine set to songs such as “Holy Grail.”

The Black Student Union (BSU) hosted Black Rhythms in celebration of the end of Black History Month, as well as the culture, heritage, and identity of the African American community. The theme of this year’s showcase was “Evolution of Identity: A Journey Toward Liberation.”  Tempestt Williams ’15 of Orange, N.J. and Maya Washington-Zeigler ’15 of Philadelphia, Pa., co-directed and produced this year’s show. Their work to coordinate Black Rhythms began in October 2013. According to Lennon Johnson III ’14 of Boston, Mass., the showcase has been annually presented for at least the past five years.

Members of the 2013-2014 Executive Board nominated both Williams and Washington-Zeigler for their positions. Williams mentioned that the most rewarding experience of this process was “seeing the whole show come together, and being amazing.” It wasn’t until the Wednesday before the show that she was able to recognize that things would indeed run smoothly on Saturday. “That’s when we had the majority of our cast together and we were running through the complete show in the Roost.”

The Black Student Union meets for its General Body Meeting every Friday at 3:30. Meetings are open to the community. Coming soon this spring will be their annual Culture Jam Week.