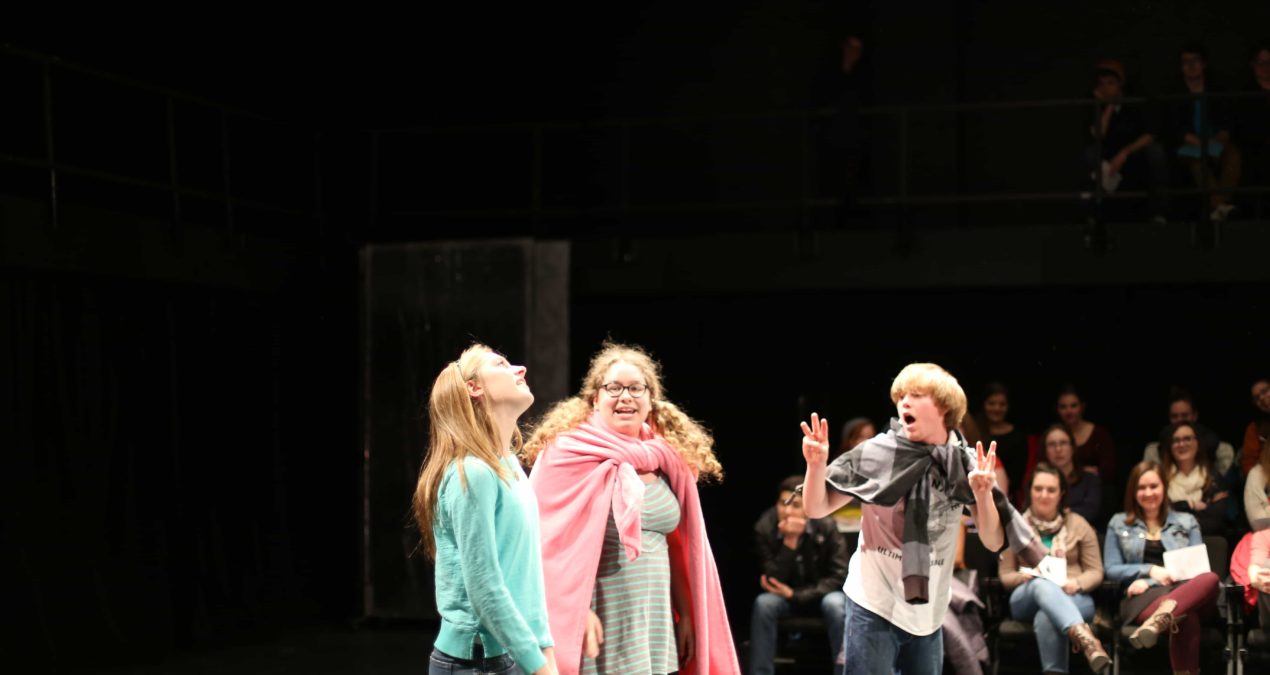 The production began on Feb. 28 in the Burke Black Box Theatre, and kicked off with “Happy Bird Day,” written by Matt DeMotts ‘15 and Ben Flox ‘14. Young Melvin’s (Jeremy Hollis) arrogant parents insist that their gift of a maniacal serial killer poorly disguised in an Angry Birds mask (Danny Webb ‘14) is the perfect replacement for his lost dog.

Hollis played nerdy Melvin with impeccable neuroticism, while Nick Ingram brought a queasy hyper-suburban WASP vibe to his father role that made me both cringe and laugh. In a nonsensical twist, “Tweety” shanked two bullies, and magically “transformed” into Melvin’s dog. While humorous, this seemed like a bit of a storyline cop-out.

DeMotts’ other plays, however, did not disappoint. “Knightly News,” written by DeMotts and directed by Meghan Neuenschwander ‘14, was my favorite of the night. Sir Timothy Bolingbroke (Chris Morriss ‘14) and Dane Penelope Adler (Taylor Nelson ‘17) played medieval news anchors reporting on the hot topics of the day, including literate women and the health benefits of leeches. The whole thing smacked of Monty Python, which this reviewer loved.

Dame Penelope told the audience she had her hands cut off as punishment for reading, and remarked with a smile “Every minute is pure agony!” Gianna Maiorino ‘15 starred as the Leech Lady, who cackled in crude English about “growin’ me leeches!” The Leech Lady put her bounty all over the news crew, who eventually passed out as the leeches drained them and the newscast came to a close.

DeMotts’ third play, “Ol’ King Rat and a Burlap Sack,” was a bizarre crowd favorite. Directed by Emma Skorepa ‘15 and starring Drew Bailey ‘17 as King Rat and Michael Somes ‘16 as Burlap, the absurd piece featured, among many things, a vulgar rap battle that brought lots of laughs, a (blind) battle royale between the King and Burlap (who was actually a cat), and a duet of the Golden Girls theme as the characters lay dying at the end.

“Moon Boy,” written by Jill Weeks ‘15 and directed by Ben Chiewphasa ‘14, starred DeMotts and Katie Rosa ‘15 as classmates Jonah and Carol, with Jonah confessing “The moon is my real father!” He collapsed on the floor lamenting the neglect he felt from his “dad,” ending the performance by rotating in a ball and shouting “Moon Papa!” as the lights dimmed (with a paper moon hanging from the ceiling as the scene went dark). The audience ate it up.

From Evan Stoler ‘16 and Khari Saffo ‘15 came “Simon,” a silly little number directed by Kyle Gasaway ‘16 about a crazy manipulative teacher (Marguerite Strong ‘16) who talked her students into physically assaulting each other because “Simon says.” The end of the play showed a “new student” named Simon (Domenic Rende ‘15), who was visibly injured as a result of his unfortunate name. The kids went after him anyway, and while the piece was humorous, it was none too deep.

“Painting Flowers,” written by Tina Berardi ‘17 and directed by Tori Newman ‘15, featured Caleb Bower ‘14 in the lead role as Mr. Cates, an artist suffering from schizophrenia and haunted by visions of his loved ones. While Bower gave an excellent performance and the script’s heart was clearly in the right place, I felt a little confused at the end, unclear what the implications of Cates’ visions really were.

Similarly, “Sidekick,” written by Katie Woods ‘14 and directed by Meghan Callahan ‘14, delivered a powerful message at its end, but lagged for much of its duration. Heroine Bridget, played by Kate Ramsdell ‘16, told a story to her babysitting charges (Erin Katalinic ‘16 and Gabe Murray ‘17), and ended up weaving in her personal life with the tale, including a version of herself called “Bridget the Boring” (Teresa Smit ‘15) and her cruel boyfriend Adam (Casey Sully ‘14).

The piece began as goofy and generally light-hearted, as Katalinic and Murray pulled off the obnoxious sibling shtick quite well, but ended on a somber and poignant note as Bridget the Boring stepped out of the “real” Bridget’s story and asked if she “remembered” her (presumably who Bridget was before she dated Adam). These opposing themes would have worked better as separate performances.

I found little to say about “Murder for One” and “Dinner Date.” The former was a murder mystery written by Gasaway and directed by Jen Salkin ‘14, and ended with the classic “It was all a dream…or was it?” line. It was a bit long, and didn’t pack much punch. The latter piece, written by Flox and directed by Sara Blike ‘15, was memorable only for young Tommy’s (Matt Harmon ‘16) battle with Saran wrap.

“Persephone,” written by Callahan and directed by Aleksa Kaups ‘16, was the production’s only shot at romance. Starring Janyce Caraballo ‘17 as Persephone and Jacob Betts ‘15 as Hades, the piece attempted to explain Persephone as simply a young writer looking for Sappho’s advice, and portrayed Hades as your friendly neighborhood god of the underworld. While both Caraballo and Betts delivered great performances, I was disappointed in this piece and found it to be not only irrelevant for those unfamiliar with Greek mythology but also just generally sappy.

So this semester, some one-acts produced laughter, some produced sadness, and some just produced confusion.